A once bipartisan push to get sex abuse victims relief on May's primary ballot has turned into a political spark since an "egregious" Dept. of State error. 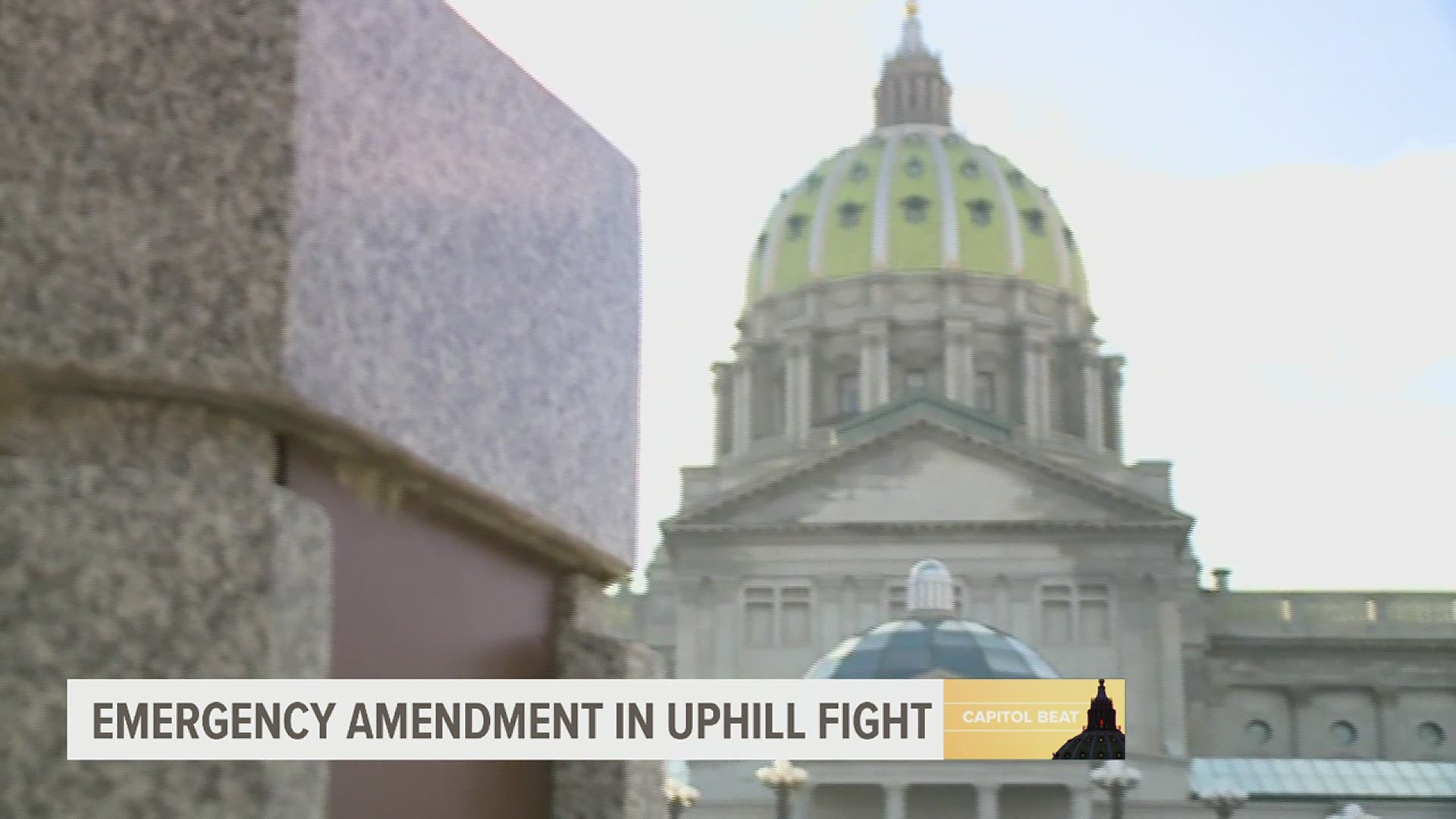 HARRISBURG, Pa. — As is typically the case with Harrisburg politics, things are never as simple as they appear.

In the case of State Representatives Jim Gregory (R-Blair) and Mark Rozzi (D-Berks), what once was confidence they had enough votes to pass an emergency constitutional amendment to still give child sex abuse victims relief in this May's primary election, now has turned into an uphill, 11th hour battle, with dim hopes of passing either chamber.

"This crime is a bipartisan crime," Gregory said. "And until we come to that realization and stop worrying about the other stuff, we're not going to get this done."

The "other stuff" which Gregory refers to is the Department of State failing to properly advertise an amendment in newspapers across the state after his and Rozzi's bill passed both the state House and Senate in 2019. The legislation would have created a consitutional amendment for Pennsylvanians to vote on in the May 18 primary, giving victims of sexual abuse as children a two-year window to sue their abusers, most notably, Catholic Dioceses across Pennsylvania. The bill needed to pass both chambers in consecutive sessions. However, just days after it passed the House for a second time in January, the Department of State realized they never advertised the amendment in newspapers across the commonwealth after it passed the first time, as is required by the state's constitution.

The error, which Rozzi referred to as "egregious" on the House floor Wednesday, essentially killed the bill on the spot, and ultimately led to the resignation of then-Secretary of State Kathy Boockvar.

However, in the weeks following the mistake, Gregory and Rozzi strummed up enough support in the General Assembly to revive the bill, under the pretense the legislature would have to pass it with a two-thirds majority vote in both chambers again, so it could still go on the May ballot.

"We have an obligation to the victims and the voters to get the language from HB14 and HB963 that we promised them to get on the primary ballot," Rozzi said in his House speech Wednesday, referring to the legislation which had already passed in the 2019-20 session, and once already in the House back in January before the error was realized.

Those bills passed the House and Senate with near unanimous support. Yet since Governor Tom Wolf acknowledged the error made by the Department of State, the measure has become a political spark plug for some House Republicans.

"The blame doesn't fall on anyone in this chamber, and it doesn't fall on victims," he said. "That blame, that sole blame for this, falls on an administration that has failed. Failed to do one single job."

House Republicans set up the bill for a final vote as early as Monday, though there's no guarantee it gets brought to the House floor. Majority Leader Kerry Benninghof (R-Mifflin) made no committments Wednesday that the bill would get a vote next week. Any emergency amendment would need to be advertised for 30 days prior to a ballot referendum vote.

"We have a lot of things on the agenda and we'll continue to work on these," Benninghoff said. When pressed by a reporter that Democrats would be accusing Republicans of going back on a promise to run the bill, he added, "It is our caucus that provided the majority votes to get this done and we have shown time and time again we are committed to this issue."

Even if it does pass the House, it faces an uncertain future in the Senate, although a companion bill, HB14, did clear a major hurdle in the Judiciary Committee this week. Despite that, Senate leaders have not publicly backed the bill, and more rank-and-file members are questioning whether a two-year window of statute of limitations relief justifies an "emergency" declaration.

"It's not a flood. It's not a hurricane. If you read the constitution many of us think that provision does not apply," said State Senator Dave Argall (R-Schuylkill).

Senators believe the emergency amendment has only been used three times, all in the 1970s, to deal with natural disaster relief. Gregory points out those instances only impacted individual communities, whereas child sex abuse is something felt by victims statewide.

The State Senate has also already introduced a separate statute of limitations bill, SB8, which would restart the two-session constitutional amendment process, with the goal of making it a ballot referendum in 2023. Gregory hasn't given up all hope for this session though. The State Capitol reopens to the public on Monday, and he says he expects survivors and advocates to be there, in the hopes of making a personal plea to state lawmakers to change their minds.