When did they know Micah Parsons was going to be special? 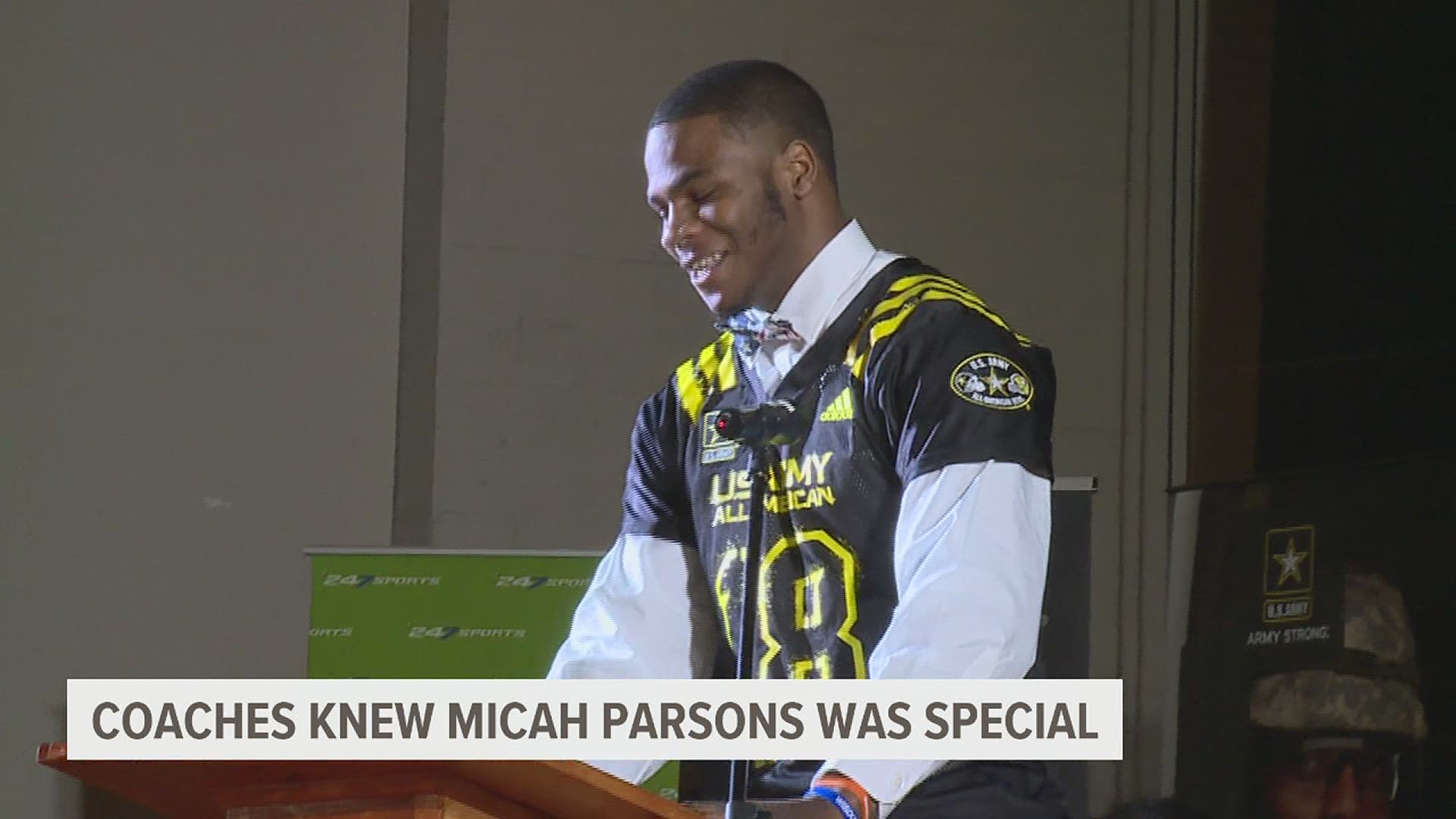 HARRISBURG, Pa. — The NFL draft takes place on Thursday night and Harrisburg’s Micah Parsons is going to make one franchise very happy.  Two people that know that all too well are his high school coaches at Harrisburg and Central Dauphin. Ask them about Micah, they can't help but flash a smile and remember the plays he made.

“He literally drug a kid for 10 yards and another kid and they were bouncing off of him. It was just like watching Tecmo Bowl and Bo Jackson."

Harrisburg head coach Calvin Everett has a lot of those memories of Micah on the field for the Cougars on their way to the state championship game in 2016.

“(He) stiff armed a guy, ran through another guy."

Central Dauphin’s Glen McNamee has memories as well.  Micah spent two plus seasons playing for the Rams.  Remembering Micah's breakout play is front and center in his mind.

“First game of his freshman year, we are at Manheim Township and we are losing by a TD with a few seconds left. All Township had to do was punt it away. He blocked the punt scooped it up and scored to send the game to overtime. That was his first game as a freshman.”

As Parsons suited up for the Rams that freshman season, it was Everett that had to look across the field and see an imposing figure wearing #90.

Micah’s flow started with a Penn State offer after just four career high school games.  To two of the men who know him better than most,  Micah has qualities beyond his physical attributes that put him on this stage.  One of those characteristics is Parsons down to earth personality.

“I just never experienced him being cocky or arrogant or anything like that at practice," says Everett.  "Micah, he was always humble.”

For McNamee it was the demeanor that he saw after the freshman received his scholarship offer. There was no relaxation, just more work to put in.

“The work that he has put in up until this moment isn’t just to get drafted but to be successful at the next level both on and off the field,” according McNamee.

It is one thing to have the attributes and be blessed with ability. It is a whole other story to put it all together and make it work on the field. In Everett's opinion when Micah saw he can take over a game, he went to a whole new level.

“He started to see and realize what he is capable of doing in terms of how he can affect the game in multiple ways and not just on defense . I personally think that is probably when he realized ‘I know I am special.’ "

The beat moves along on Thursday for Micah when he puts on another jersey, this time for an NFL franchise. A big night for the entire Harrisburg area football community, a huge night for the Parsons' family. But it is also a pretty cool night for two of his former coaches.

“It is hard to believe that it is here, that this moment is here," says McNamee. "It is obviously a big night across the country, the draft has taken on a life of it's own and to have him in the position that he is in, it just adds to it."

With a smile on his face Everett concurs.

"Just to be able to say that he came through our program I had some type of impact on him whether it be big or small so I’ll definitely be extremely excited.”

Before Parsons last game with Penn State he introduced him self on the jumbotron at AT&T Stadium.  Who knows maybe he will introduce himself there as a Cowboy after the first round on Thursday.