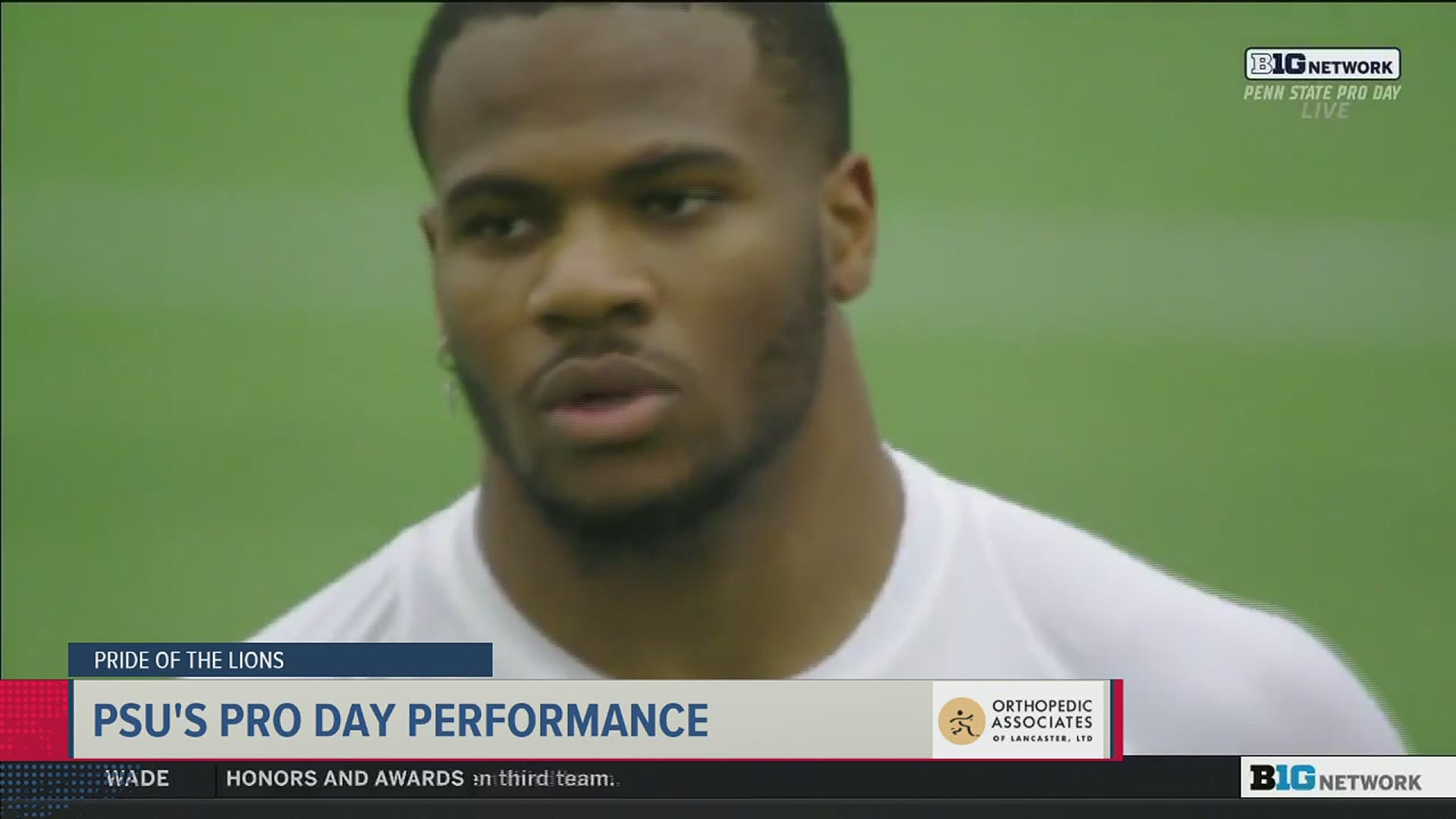 STATE COLLEGE, Pa. — "That's wide receiver fast," is an accurate description of the numbers put up by the former Nittany Lions at Pro Day.

Penn State's Pro Day brought representatives from 31 NFL teams to Happy Valley this past week, and one of the prospects they wanted to see was Harrisburg's own Micah Parsons.

For the first time since the Cotton Bowl in December of 2019, we saw Parsons competing on the grid-iron.

Most experts anticipate him being an early first round pick, and his pro day performance backed that up.

"I'm just going to make plays like I did at Penn State, show these guys why Penn State breeds the way we do," he said afterwards on a zoom with the media.

Micah wasn't the only one with impressive numbers.

Defensive end Jayson Oweh also turned heads with a stunning 4.36 40-yard dash, 21 bench press reps of 225 pounds, and a 4.21 20-yard shuttle run. Oweh and Parsons have been training together to get ready for the draft. According to Oweh, that has driven the fast times.

"He has this thing where, whoever goes first, the second person is always going to have a better time, seeing what the other person did, so they have to kick it up a notch."

Pat Freiermuth is still working his way back from surgery, so he didn't test everything, but did run routes for the scouts and coaches.

"They want me to drop a little weight. I think I weighed in at 251 or 252, so that's probably where I'm going to play at my rookie season."

On a zoom call hosted by FOX43's Todd Sadowski, former Nittany Lions who know a thing or two about playing in the NFL reacted to numbers put up by the latest pride of the Lions.

Former Lion and Miami Dolphins wide receiver O.J. McDuffie had this to say about Parsons referring to NFL scouts.

"They know these guys can play football, but now they can see how these guys measurables, measure up to everybody else.  And those measurables are off the charts. Think about a guy like Micah, he has only played three semesters of football at Penn State, so he has barely been there and that means how raw he is."

A member of the Linebacker-U tradition Brandon Short also chimed in to react to Micah's number by comparing his own numbers back in 2000.

"(These players) catapulted forward in terms of speed and agility. When I ran mine I ran a 4.61/4.59 and did 26 on the bench so I was strong but no where near as agile as these dudes."

The year short was drafted was 2000. That's when Penn State had the first and second overall picks from the same defense, defensive end Courtney Brown #1 and LaVar Arrington #2. That LB - DE combination is similar to the Parsons - Oweh tandem in terms of athleticism. McDuffie was also a first rounder, taken with the 25th pick of the 1993 draft by the Miami Dolphins.

While some Lions are ready for the next level, other are anxiously awaiting this upcoming year and are excited for spring practice.

Tight End Brenton Strange is expected to be a go to target for the Lions offense. He has been motivated by the 0-5 sign that was displayed in the weight room during the offseason.

On the defensive side of the ball senior Tariq Castro-Fields made the decision to return to Penn State in part because of an injury riddled 2020 campaign.  The corner is ready to give it one more go and leave it all on the field.

"Just got to be able to play a full season and just show what I can do. I have so much more in the tank and I have not been able to show it yet so I am excited for this year, I am excited for practice tomorrow."

Castro-Fields said part of him getting better is just being available.