Adams Co Commissioner Marty Qually says his post wasn't about the statues, as much as the reaction they garner 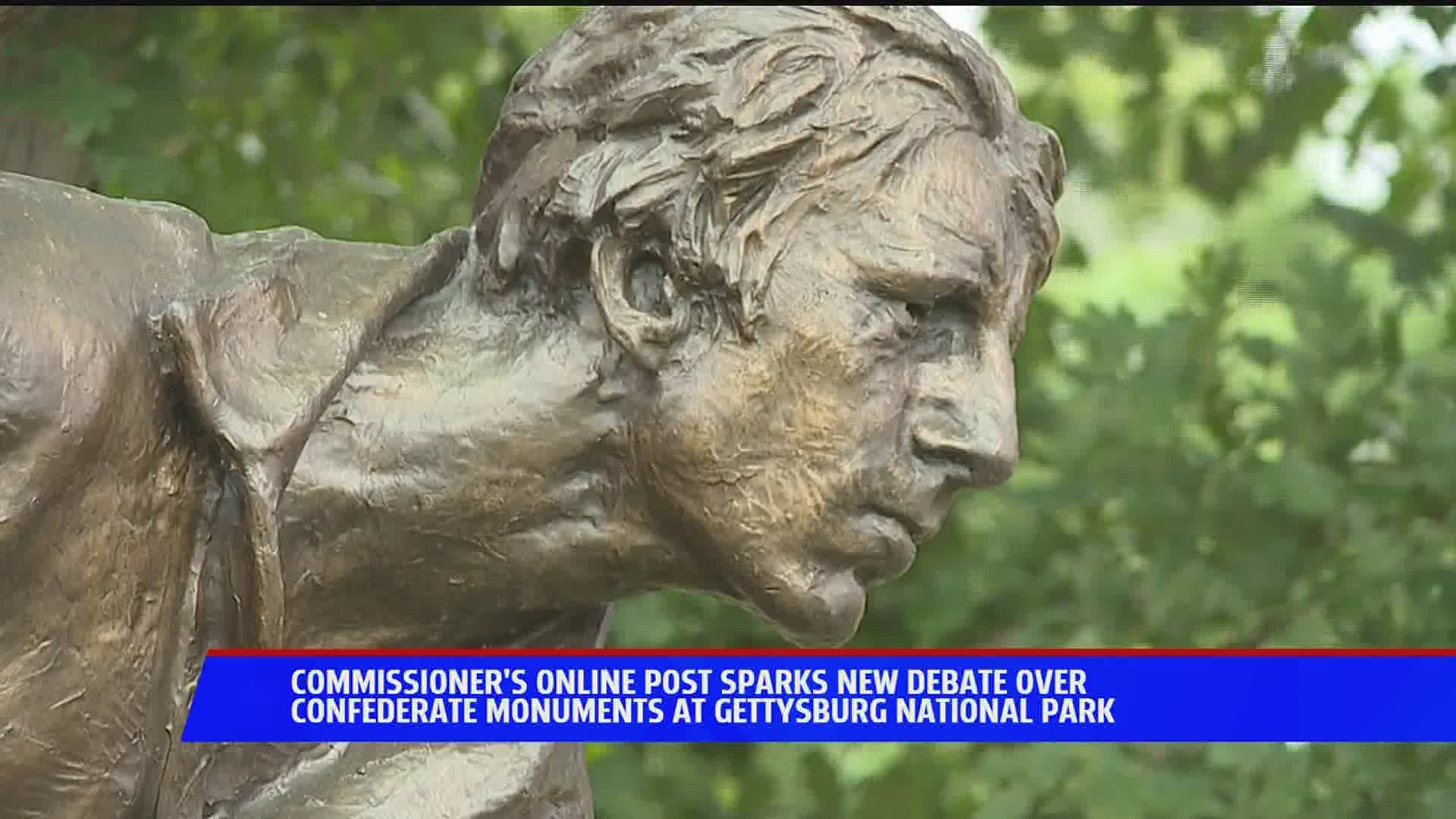 An Adams County commissioner is speaking out after his online post calling for Confederate statues to come down in Gettysburg National Park garnered controversy.

"My concern is not the monuments themselves. I don’t think you take down some monuments and racism in America goes away, " said Marty Qually, who later added "it's not the statue, it's the reaction."

Qually said he's not trying to erase history. But, he pointed to problems stemming from when counterprotesters showed up at Gettysburg over July 4th weekend in response to rumors of an ANTIFA flag burning spread online. Qually called the flag burning rumors an 'obvious hoax.'

"There are people walking around with not just handguns on their sides, knives on their sides, but with AR-15's over their shoulders and confederate flags," said Qually. "Later when you see on social media and you start seeing Klan flags and you see people with swastikas tattooed on their neck you get outraged cause this is not what our community is like."

Qually later took down the post. He told FOX43 he did that because the post was receiving so many comments it was becoming hard to monitor.

"The only thing I could think of to do was, okay, I'll just take it down. I actually unpublished my page for a little bit. Next week, I'll probably bring it back up," said Qually.

PA State Rep. Dan Moul of Adams County called Qually's comment that Confederate monuments should come down at Gettysburg National Park 'insanity.' He said the monuments are part of history at the park and they tell a story.

"If you wipe our history away, we are bound to repeat it. And, that's a place we never want to go again in this country," said Moul.

Moul agreed "those people who carry those symbols of hate have no place here. Don't bring your hate here. That's not what this town's all about."

However, he said not everyone who was in Gettysburg during the 4th of July was there to do that or to cause trouble. He added, any threat, whether real or perceived in Gettysburg, is going to attract attention from both inside and outside of Gettysburg.

"This town is sacred to a lot of people and they will go to just about any extent to protect this town, what this town stands for and the battlefield and the monuments on the battlefield," said Moul

But Qually said, "if that’s going to happen every time someone says they’re going to threaten Gettysburg than our economy is going to collapse here."

What do you think? After armed counterprotesters showed up at Gettysburg July 4, one Adams Co commissioner posted online for Confederate monuments to come down at Gettysburg National Park. Today, he spoke to me to explain his post wasn't about the monuments, as much as the reaction they garner. WPMT FOX43 https://www.fox43.com/article/news/local/commissioner-calls-for-gettysburg-statues-to-come-down/521-5d595a59-9c84-41bb-b960-2aff73ea57ff

"Along with celebrating our nation’s independence, this Independence Day in Gettysburg was held with threats and rumors of flag burning, monument damage and other forms of violent and non-violent protest. As a result, Federal, State, County and Local Law enforcement mobilized in force to react to any incidents.  With extensive planning, preparation and resources, fortunately, there were only few incidents. Any protesters were greatly outnumbered by counter-protesters, as anticipated by law enforcement.  We applaud those law enforcement officers and emergency responders for their efforts last weekend!

As a result of these activities, and a posted public statement that afternoon by one commissioner, as the other two Adams County majority commissioners, we have been asked our position on activities this past weekend. To set the record straight, our position is that both groups had the constitutional right to lawful expression of their beliefs as allowed by the 1st Amendment.  Whether it be decrying Confederate symbols, protesting the flag in public, or displaying other symbols of support or disagreement, it is a constitutional right to lawfully do so - whether others agree or disagree!

Because Pennsylvania is an “Open Carry” state, it is also the constitutional right of the counter-protesters to openly carry weapons without a permit if the individual is legally allowed to possess a weapon in Pennsylvania. A permit is required in Pennsylvania to carry a concealed weapon. Such a display may be concerning to some and applauded by others; but that is the law in Pennsylvania based on statue and a plank of the 2nd Amendment. Despite the optics, it should be obvious that the  multitude of law enforcement agencies at all levels, and the National Park Service, were very much aware this weekend of what was lawful and what was not - and they acted according to law.

Turning to removal of Confederate monuments in Gettysburg National Military Park, we strongly oppose any such action. These are historical monuments and not statues. The relevance of these monuments, and the mission of the National Park Service, is and has been, to interpret our nation’s history for one of the world’s most famous and pivotal battles. Note that most of these monuments were erected during the ‘’Gettysburg Monumentation Period” in the 1890’s, only thirty years after the civil war when many veterans on both sides were still alive and making policy. To infer that monuments at Gettysburg National Military Park should be removed is mis-guided and troubling. Commissioner Phiel especially has a unique personal insight and interest on this subject as he spent 30 years of his life protecting National Park Service historic and natural resources, including the 1300 monuments, markers at Gettysburg National Military Park as a U.S. Law Enforcement Ranger.  These monuments are not only visual messengers of history; but works of art and creativity.  From both a personal perspective, and from our positions as Adams County Commissioners, we are aware that removal of the monuments from GNMP is not on the table; but loudly and adamantly denounce any effort to remove any monuments from this Adams County historic treasure!

In conclusion, there are times that we as individuals and as a community will be tested. This past weekend was one of those tests. We are very fortunate to live in a country where we do have the opportunity to express our beliefs. God Bless America!"