ORLANDO, Fla. — “This is bigger than football, all of this is,” said Kentucky tight end C.J. Conrad. “Spending time with the kids, being... 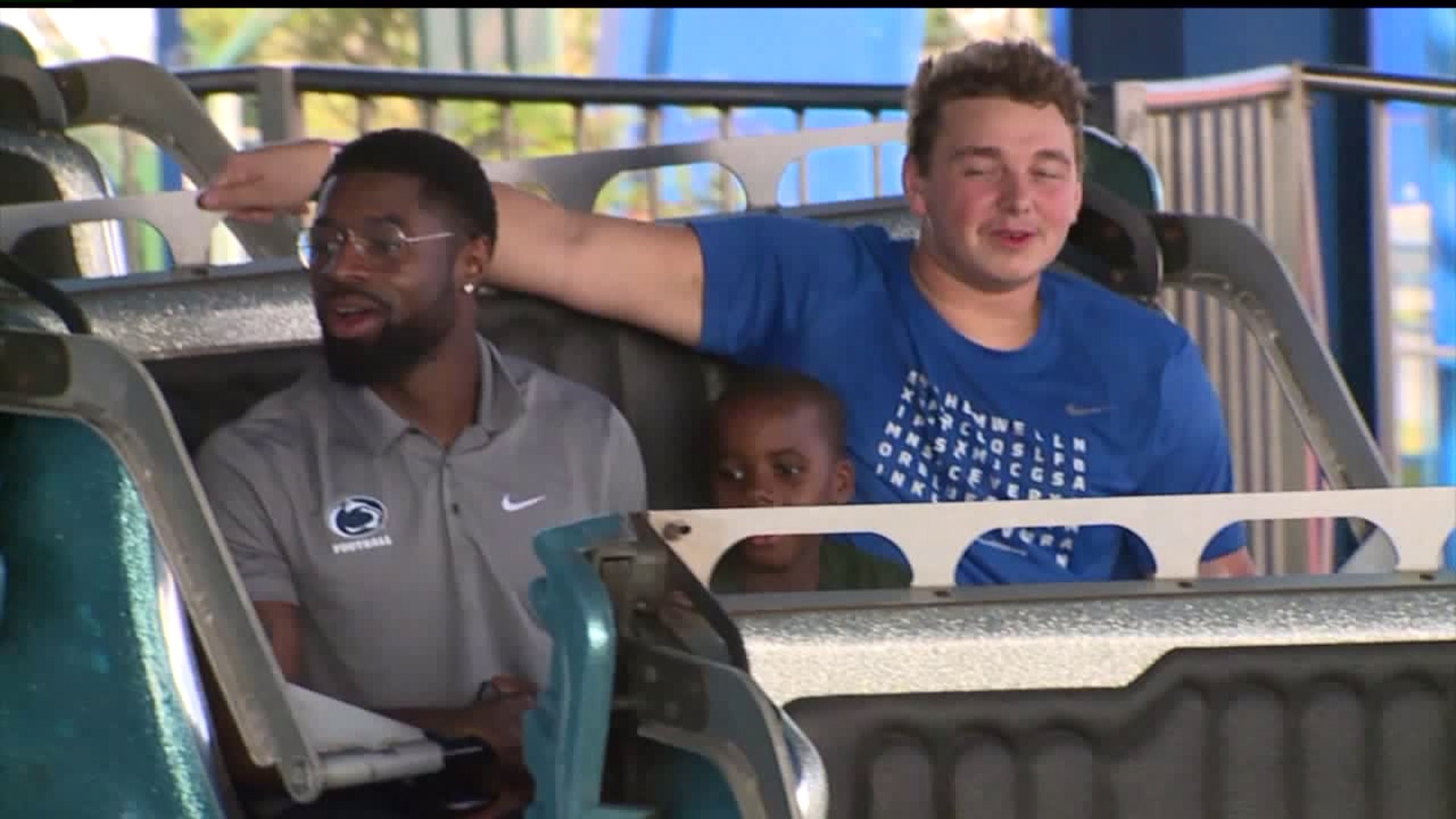 ORLANDO, Fla. -- "This is bigger than football, all of this is," said Kentucky tight end C.J. Conrad. "Spending time with the kids, being with Penn State, putting smiles on their faces is way more important than the game."

The Kentucky senior offered some context to a cool event that benefits everyone involved. The Nittany Lions and Wildcats do butt heads in less than 48 hours at Camping World Stadium. On Sunday morning, they paired up here at Fun Spot America to create a lifetime memory for local kids in Orlando, and for themselves.

"I think it's a great learning and teaching moment today," said Penn State special teams coach Phil Galiano. "It;s not about us and Kentucky right now. It's about us having an influence on these young kids' lives and giving them a chance to have a really fun day. That's important to see the impact they have on it."

The kids live in the West Lakes community of Central Florida. They found out a few weeks ago they'd get a chance to meet some college football players. Their new friends made a huge impact right away.

"When I first saw them, I was like whoa, 'they're big," but not in a bad way," said Dekhyla King of West Lakes. "In an exciting way."

"They were like, 'Whoaaa,'" said Shawn Welcome, West Lakes MVP families engagement coordinator. "Doing this kind of stuff because they guys are so big, but I really appreciate Penn State and Kentucky donating their time, spending some time with the youth. It means so much, some of these kids will remember this way down the line."

As is usually the case, this event makes an impression with the older, bigger kids. Especially with the competition walking side by side.

"I'm cool with those guys," said K.J Hamler, Penn State freshman wide receiver. "It's not really a game right now, we're just here for the kids. We're not focused on that, mostly on the kids and having fun today."

"It is a little weird, but they're really good guys," said Conrad. "It's fun until Tuesday, right?"

Dekhyla has two chaperones, but it sounds like she's the one calling the shots.

"We had went on the rip curl and the yellow roller coaster, and the bumper cars and that, the Head Rush.," she said.

"It's been a great experience," said Penn State senior running back Johnathan Thomas.  "We still have more fun to do."

Phil Hoskins, a junior defensive tackle on Kentucky tried a frozen treat for the first time. "She's got me trying Dippin' Dots," he said. "I didn't know it was ice cream. It's pretty good, cookies 'n cream. But Dekhyla, yeah I like her, she's a cool kid."

"No. It won't be the last, and you can thank her, thank Dekhyla."

Today was an unforgettable day for Sean Council. How will he explain to his teacher and friends what he did on his holiday vacation?

"We did a lot of stuff," he said. "I met with some soon-to-be pros, football players. We had a great experience, we had fun."

Sean also noticed that while the players seem to be comfortable with the rides, there are some Florida features that do scare them.

Can't blame them, the Gatorland exhibit features a 13-foot gator found in a nearby neighborhood. And an albino gator. Unsettling.

Whether it's snakes, the sky-coaster or simply an ice cream, there's nothing quite like a walk in the park.

"Some of these players may be going to the NFL, and to have this memory of giving back to the community in this kind of way is something that I think grounds players and keeps them humble as we all wish our stars to be," said Welcome. "And hopefully, when they do go on to their professional career, they will always remember our community and be willing to give back."

The lasting image I will take away from today is little Dekhyla hanging with a Nittany Lion and a wildcat. The Kentucky player, Phil Hoskins is a defensive tackle listed at 6-5, 306 pounds. A gentle giant with his new friend Dekhyla.