HARRISBURG, Pa. – Republican State Lawmakers unveiled what’s being called “heartbeat” legislation. It would prohibit abortions once a he... 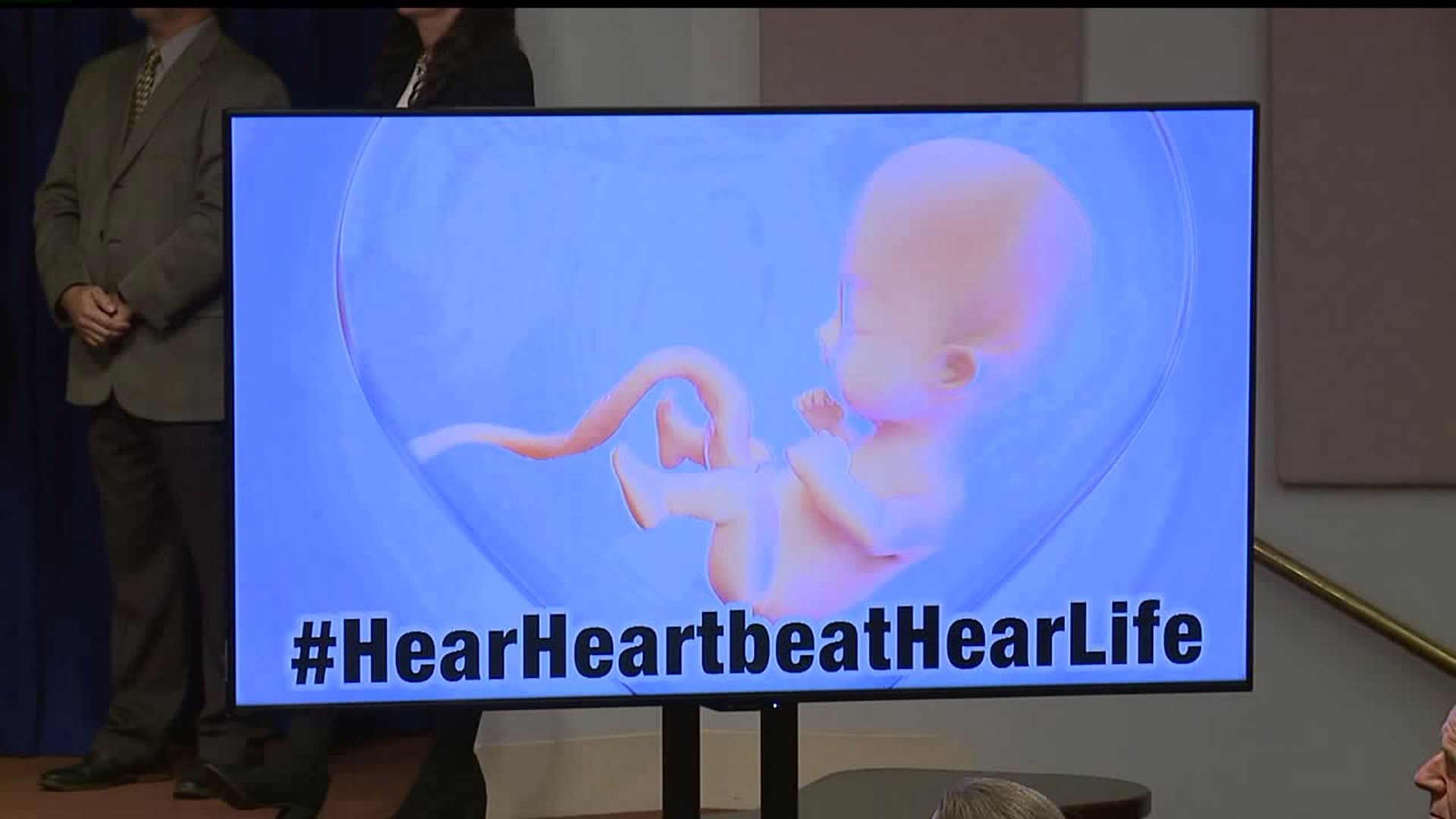 18 other states have either introduced or passed a heartbeat bill. In the last two years, similar bills have passed in Georgia, Kentucky. Mississippi, and Ohio but none have gone into effect.

If passed, the law would require all doctors to determine if there is a heartbeat before performing an abortion. If a heartbeat is found, an abortion would not be allowed to be done, unless the mother's health is a risk.

"There's something really wrong here," State Senator Mastriano, said. "Something nefarious is going on. We turn our backs on the most vulnerable; those who don't have a voice. And let them be massacred in the womb. We're talking about the stats of the federal government 60 million abortions since Roe v. Wade was legalized in the '70s."

"There's something really wrong here," Mastriano said. "Something nefarious is going on. We turn our backs on the most vulnerable. Those who don't have a voice, and let them be massacred in the womb. We're talking about the stats of the federal government 60 million abortions since roe v wade was legalized in the 70s."

Kathy Barnette, the keynote speaker at the news conference, shared the story of her mother's attacker - that inevitably brought her into this world.

"I had nothing to do with the conditions that brought me into existence and yet there I was, being wonderful and fearfully woven together in my mother's womb," Barnette said. "I was a human, I was a person, I was not some inanimate object."

Currently, state law permits abortions up to 24 weeks of pregnancy, regardless of whether or not a heartbeat is detected. The new legislation would require all doctors in the state to determine if there is a heartbeat before performing an abortion.

Some question if this bill is an outright ban on abortion, as most women do not know they are pregnant until the 6-8 week time frame when a heartbeat is formed.

“I didn’t know until 8 weeks with my first son, yeah that life is saved," said State Rep. Stephanie Borowicz.  "I see it differently that how you’re seeing it, that these ladies then don’t have the choice to get an abortion, I see it as then these ladies have the ability to have their child. That child’s saved.”

Let me be clear: I will veto any abortion ban that is put on my desk. The latest bill, a six-week abortion ban, defies all practical understanding of modern women’s health care. These policies run counter to the notion of individual freedom and lack a sound scientific basis. Further, as we have seen in other states, these policies are detrimental to efforts to attract and retain businesses, entrepreneurs and workers.

My administration is committed to reducing maternal mortality and giving women, children and families the support that they need to succeed. This should be our focus, not regressive policies that make it harder for vulnerable people making difficult and deeply personal decisions.

Banning abortion at six weeks bans abortion before many people even know they're pregnant. This bill is nothing but another unconstitutional attempt to ban abortion in Pennsylvania. Similar bills have been blocked by courts in nearly every other state where six-week abortion bans have been enacted. It’s a waste of taxpayer time and money, and the General Assembly’s time would be better spent focusing on laws that would actually help Pennsylvanians access vital reproductive and health-care services.

This isn't the first time a heartbeat bill has been introduced in Pennsylvania.  A Fetal Heartbeat Bill was introduced back in May of 2018, but it never made it past the House Judiciary Committee. House Bill 1977 has been referred to the House Health Committee.