We're itching and sneezing more because of climate change, with longer pollen and bug seasons becoming the norm. It's only going to worsen as the warming continues. 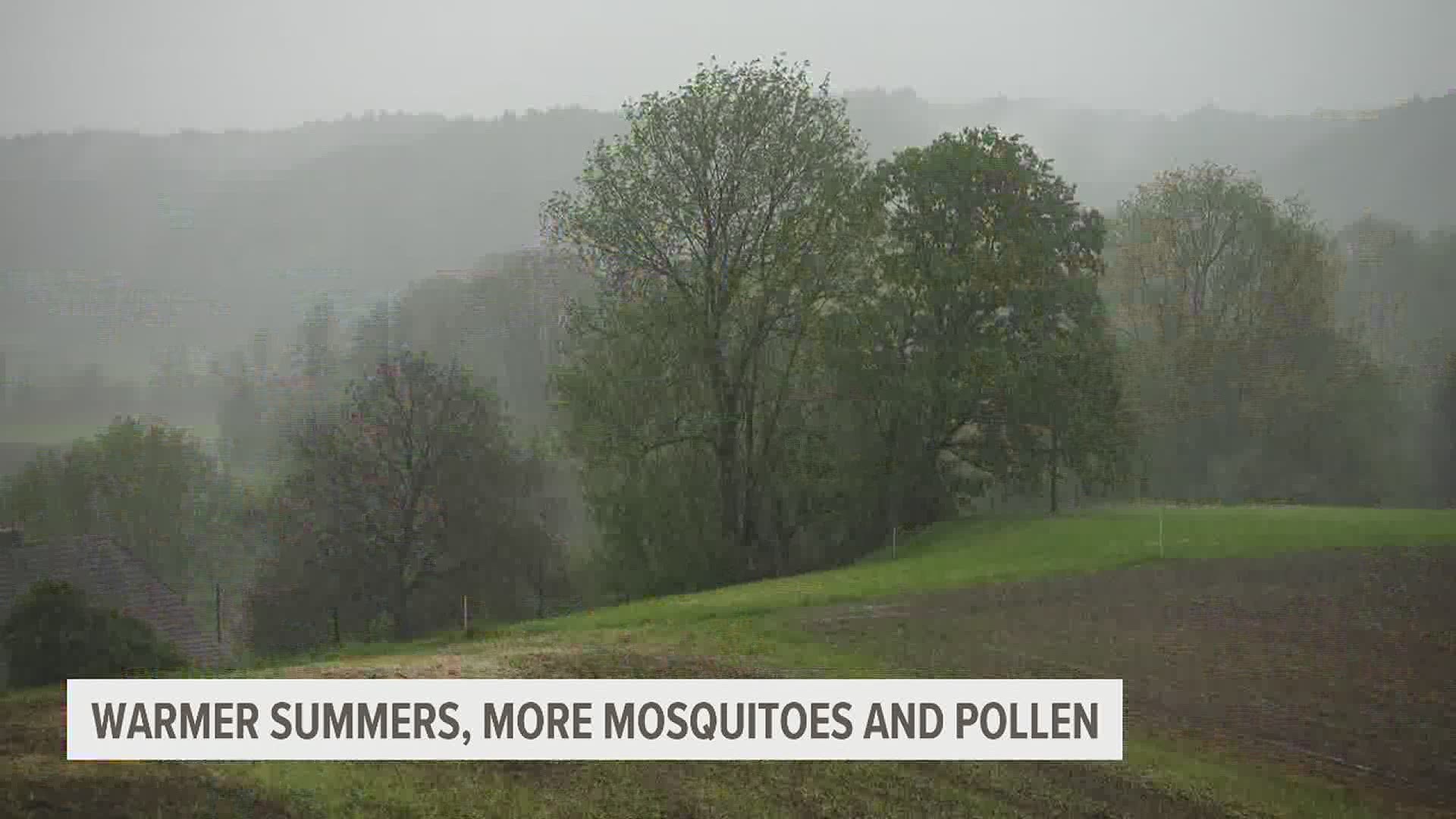 PENNSYLVANIA, USA — A warming climate means longer summers and shorter winters. While that means more time for the fun we associate with the warm season, it also means a longer window for the things we don’t like.

Let’s start with the ones that bite us.

A familiar summer bug is already hanging around a little longer than usual, and that’s expected to continue.

Dr. John Wallace, Professor of Entomology at Millersville University, says to expect pests like mosquitoes to hang around longer. “We may find more insects like mosquitos biting us way into October when they normally wouldn’t,” he says.

Higher temperatures over a longer period of time are allowing this little bugger to thrive.

Credit: FOX43 Weather
The warming climate has lead to an increase in mosquito days, and that trend is only expected to continue.

t’s not just the extended warmth. Increased precipitation amounts in our warming climate affect these piercing pests too.

“We get a lot of snow or we get a lot of spring rains, and that creates a lot of habitat for mosquito larvae," Dr. Wallace said. "And we see this population of mosquitos coming out a little earlier.”

And if more mosquitos are surviving the winter and into the spring, that larger population can impact West Nile season, particularly if a dry and hot summer follows a previously wet summer.

“In the spring, if you get a lot of mosquitos coming out," Dr. Wallace said. "And when that viral load is jacked up in the birds, you get more and more mosquitos picking up West Nile virus. And that’s when West Nile can appear earlier in the season.”

For a more detailed explanation of this, you can watch that portion of my interview with Dr. Wallace using the link below.

If you’re okay with more bug spray and other mitigation measures during the warm season, you might not be okay with the extra pollen—at least if you have allergies.

Dr. Hey Chong, Division Director of Allergy and Immunology for UPMC Children’s Hospital of Pittsburgh, has noticed her patients are reaching for treatments earlier than ever.

“Sometimes I would say you can start your intra-nasal steroid March 1st," she says, "And then it got pushed back to February 15th. And now, I’m even wondering if I even need to start saying February 1st to start covering any warm seasons that we may have to where it’s unseasonably warm in February.”

And this is no coincidence. Dr. Chong is familiar with several studies that link carbon dioxide increases to pollen increases from plants.

Credit: FOX43 Weather
Increasing temperatures in our warming climate is directly correlated to pollen increases. Projections continue this trend over the next several decades.

She says there are studies that show the length of pollen season increased 20 days for each of the pollens. Nearby in Harrisburg, the total seasonal increase is 13 days since 1970.

Credit: FOX43 Weather
The pollen season in Harrisburg has increased by 13 days since 1970.

On top of that, pollen types such as trees, grass, weeds, and ragweed are lasting longer through the seasons and overlapping as well.

“The more humidity, the more it rains, the more damp it is, that can increase the mold that you’re seeing, and that mold can also affect patients with asthma,” Dr. Chong says.

And there’s more bad news, particularly for asthma patients, according to Dr. Chong. “The pollen itself can carry more of the harmful irritants in the atmosphere that we consider pollutants.”

And unfortunately, this means asthma patients could be reaching for the inhaler more often as our climate continues to warm.

If climate change continues unchecked, we’ll have to keep adjusting and learn to live with the growing inconveniences and health concerns of more pollen and more mosquito bites.

Of course, the best way to mitigate these issues is to substantially reduce carbon dioxide emissions on a global scale.

But there are small steps you can take every day to protect yourself from these blooming issues in our warming climate.

You can reduce mosquito habitats by cleaning out rain gutters, emptying bird baths regularly, and disposing of old tires properly.

As for pollen, planting more trees helps sequester carbon. But on a more individual scale, getting tested for specific allergens helps better manage seasonal allergies. Taking this step allows you to monitor pollen types more closely on a daily basis, so you know which days to spend less time outdoors. Also, keep in mind that mold can fester in piles of leaves in the fall and winter, so be sure to properly dispose of them during the colder seasons.