A warm and dry summer is to blame for crop damage and failure scattered across farms in Pennsylvania. 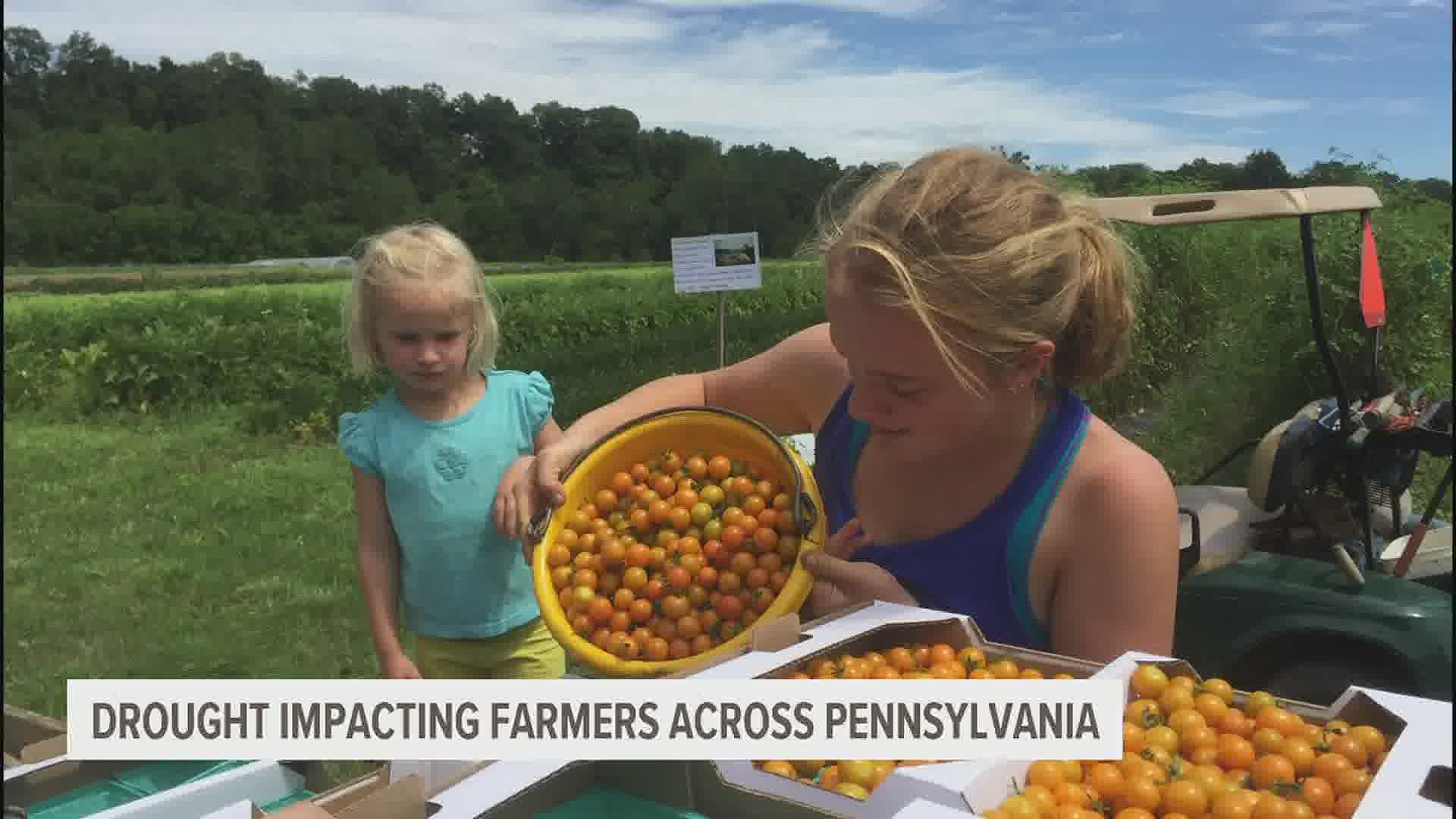 PENNSYLVANIA, USA — There are currently 29 counties on drought watch across the state of Pennsylvania. Four of those 29 counties are in our area - Mifflin, Perry, Juniata & Cumberland.

With moderate to severe drought being reported for weeks in central portions of the state, local farmers are feeling the impact.

Co-owner of Village Acres Farm, Hannah Smith-Brubaker says, “We were especially hit hard. At one point we had gone, I think, 6 weeks with less than a quarter of an inch of rain at the height of the growing season.”

During the COVID-19 shutdown, when grocery store shelves were empty – Hannah says local farmers were doing fantastic. Customers were buying directly from them.

Now, the effects of the drought could make things difficult for local farmers markets.

Farmer Hannah says, “I worry that the availability of product from local farmers at farmers markets or through CSAs is going to be disrupted somewhat.”

One crop that has been particularly damaged this year as a result of the lack of rain is corn.

“We had a complete crop failure when it came to sweet corn this year. We didn’t have any at all. It just didn’t grow. It started off as a really great stand, but then the drought was so bad that we lost the entire crop," Smith-Brubaker explains.

Agronomy educator from Penn State Extension, Justin Brackenrich says, “What we see is things like this, where our yield starts to change. What we see is this tip is not filled out. It kind of slightly curves because this side has a different size kernel than over here. That’s a very characteristic ear of a drought.”

While crops are seeing severe impacts, the drought is also impacting livestock and pastures.

Brackenrich says, “There is a big concern now because of the drought and how it affected grasses – ‘Are these livestock producers going to have enough forage to get through the winter on what they have and feeding their livestock?’”

Smith-Brubaker explains, “It’s sort of this vicious cycle where our animals didn’t have prolonged or robust pasture to graze on and so our grazing season is going to be shortened – so they will need more hay in the winter.”

Pumpkins are also being affected across Pennsylvania, but not because of the drought. Smith-Brubaker says their farm saw the earliest frost in nearly three decades this year. As a result, pumpkins had to be harvested early, and those that weren't - didn't make it.

Unfortunately, the consequences of the drought will likely leave farmers paying more out of pocket, and therefore an increase in prices, especially at the local farmers markets may be the only option.