The shortest nights of the year will bring excellent stargazing opportunities. 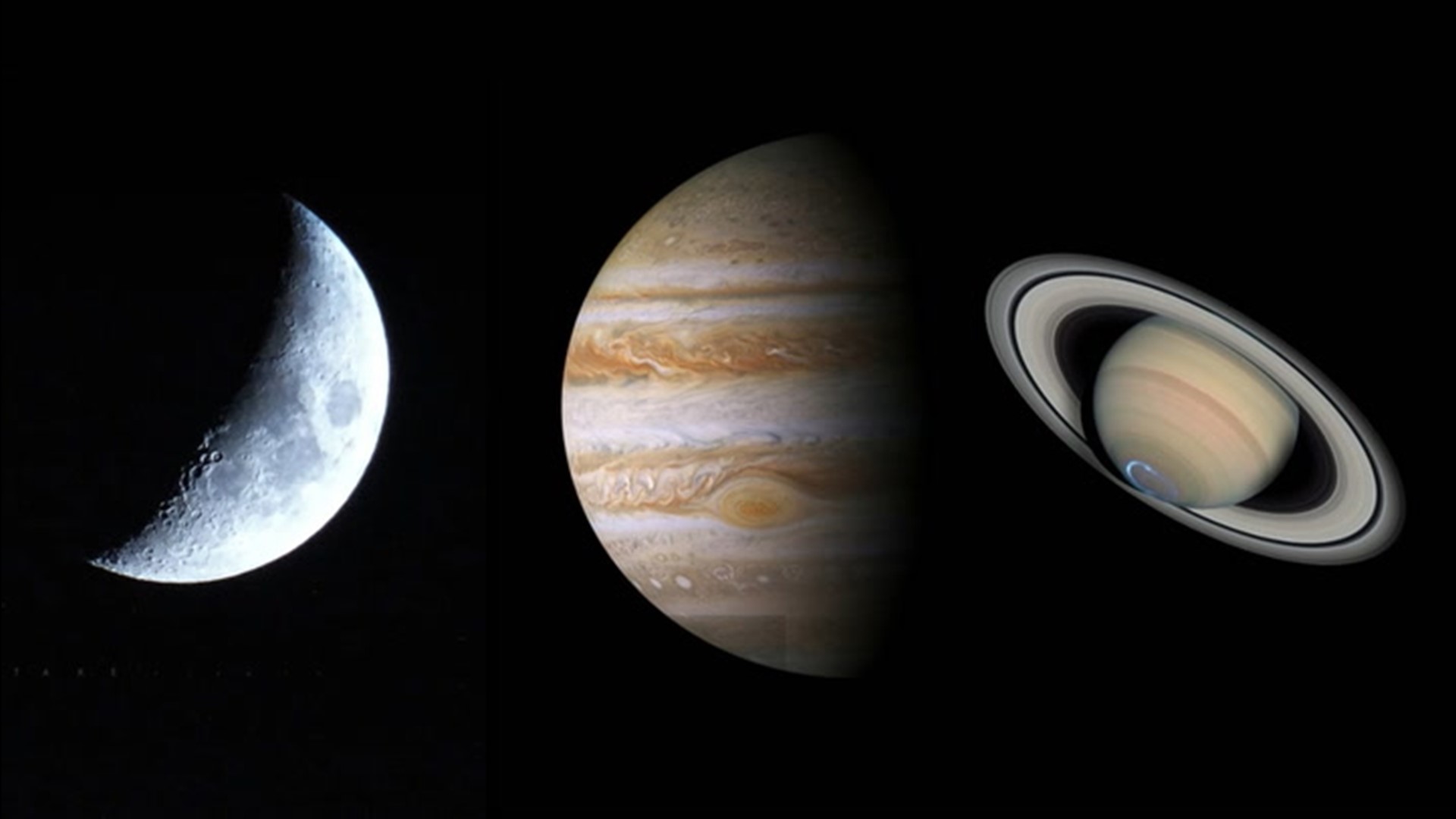 Summer is knocking on the door for those across the Northern Hemisphere, and while June does bring the shortest nights of the entire year, stargazers will be treated to mild weather and a diverse collection of astronomical sights.

No telescope is needed to see any of the astronomical events this month, but a grouping of Jupiter, Saturn and the moon will bring the perfect opportunity for people to get familiar with a new telescope.

Here are the top three astronomy events to look for in June:

The first weekend of June will kick off with a full moon rising in the eastern sky right around sunset on Friday, June 5. For onlookers across North America, this is commonly called the Strawberry Moon.

"This name originated with Algonquin tribes in eastern North America who knew it as a signal to gather the ripening fruit of wild strawberries," the Old Farmer's Almanac explained.

June's full moon takes on different nicknames around the globe. In Europe, it is typically called the Rose Moon, but in China, it is known as the Lotus Moon. For those in the Southern Hemisphere where the season will soon transition into winter, it is referred to as the Long Night's Moon.

The full moon will also come with an added bonus for some areas of the world.

A penumbral lunar eclipse will be visible on Friday night across Australia, Asia, Europe and Africa, as long as cloudy conditions don't obscure the event.

2. A celestial trio you can spot with the naked eye
When: June 7-8

Jupiter and Saturn will shine brightly next to each other all month long, and just before the middle of the month, the planets will have a visitor.

On the nights of June 7 and June 8, the moon will swing by Jupiter and Saturn, rising in the southeastern sky just before midnight, local time. The trio will climb higher in the sky as the night transpires and will be hard to miss.

"If you stay up very late on the nights of June 7 and 8, 2020, you can glimpse the moon with the bright planets Jupiter and Saturn, ascending in the east. Or see them before daybreak, in your southern sky," EarthSky explained.

This will take place over the course of two nights, so stargazers will have a couple of opportunities to see the event.

No telescope is required to see the celestial meetup, but having one will add to the experience.

Pointing a basic telescope at the moon will give onlookers a more detailed look of all the craters on its surface. More powerful telescopes will allow folks to see some of Jupiter's largest moons and even Saturn's famous rings.

3. Stargazing on the summer solstice
When: June 20

Summer officially gets underway across the Northern Hemisphere at 5:44 p.m. EDT on June 20 with the summer solstice. The solstice features the longest day and shortest night of the year, but don't let that dissuade you from stargazing.

The first night of summer should bring mild weather for stargazers, making it more comfortable to spend time under the stars when compared to the long, cold nights of winter. There will also be a new moon around the solstice this year, meaning that there will be a dark, moonless night to kick off the summer stargazing season.

The summer is also the best time of the year to look for the Milky Way, although people will need to head to dark areas away from light pollution to see it.

"The little dipper appears to ‘pour' into the big dipper, and the tip of the handle of the little dipper is the north star," Samuhel said. "You could see either of these in July as well."

May kicked off with the Eta Aquarids, a meteor shower sparked by debris left behind by Halley's Comet. This was also the final major meteor shower until late July.

A few nights later, the ‘super flower moon' rose and shined bright in the night sky, making it difficult for stargazers hoping to catch some shooting stars just several days after the peak of the Eta Aquarids. This was also the final supermoon of 2020.

By the middle of the month, people stepping outside just before daybreak were able to spot Comet SWAN, which became bright enough to see with the naked eye.

During the final week of May, SpaceX and NASA worked together to attempt the first crewed rocket launch from Florida since the end of the Space Shuttle program in 2011. The launch was set for Wednesday, June 27, but bad weather forced it to be delayed.

Astronomers just got their best-ever look of Jupiter's atmosphere with the help of NASA's Juno space probe. Juno took an image of the planet that revealed the structure of storms raging across the planet, giving scientists clues into the weather cycles on Jupiter.

Jupiter may be the largest planet in our solar system, but a planet three times as large was discovered 1,240-light-years from Earth. The planet is so massive that it influences other planets in the Kepler-88 system.

Elsewhere in our solar system, astronomers discovered a black hole just 1,000-light-years from home, making it the closest one to Earth ever discovered. While this is close on a cosmic scale, it poses no threat to our planet.