Here's a look at the science behind the spectacle. 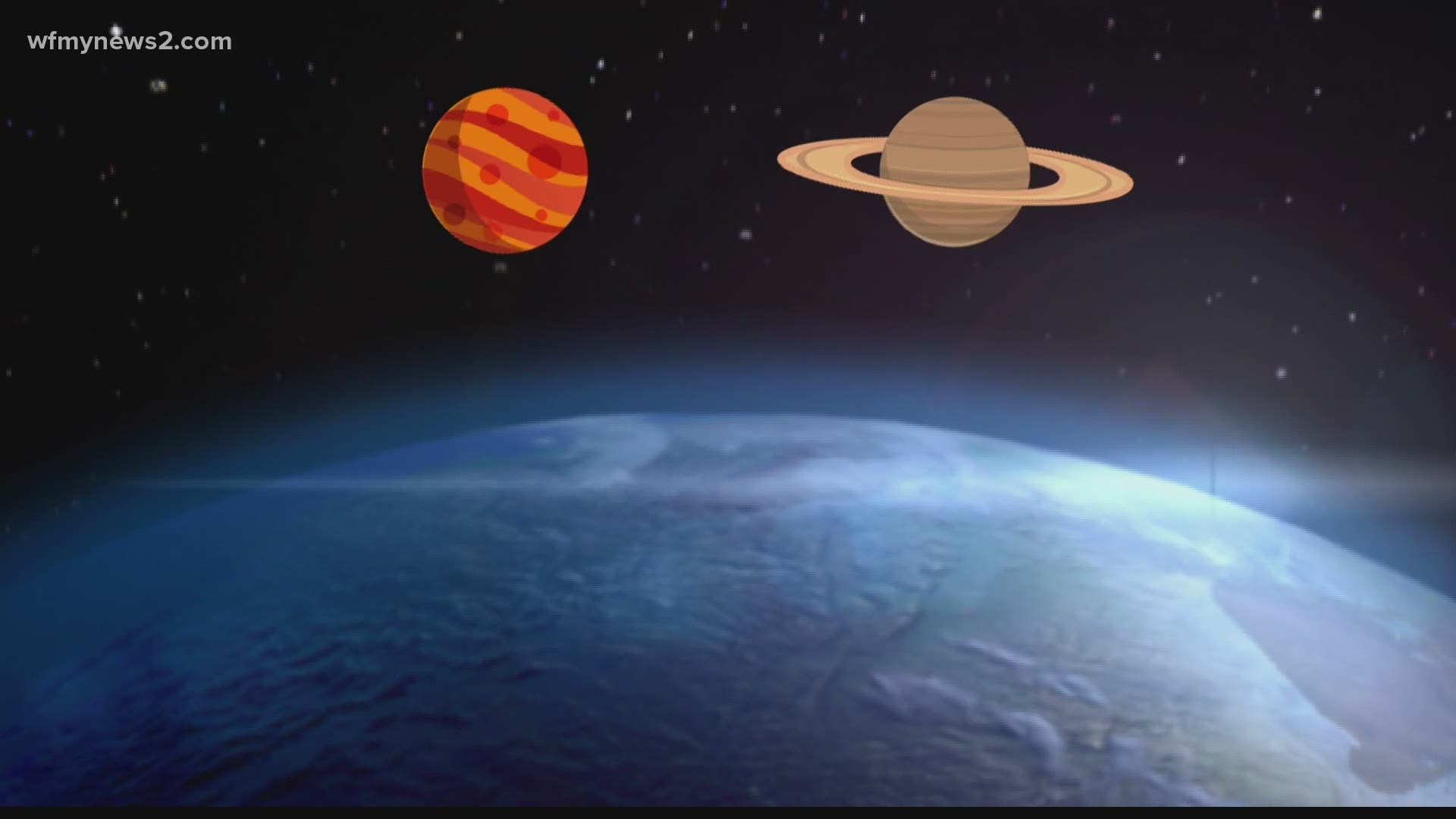 GREENSBORO, N.C. — You've likely seen this headline all over the internet in the last few weeks: "Christmas Star appears on December 21, 2020". Lots of folks will look to the starry sky that Monday night because, it's true, something special will happen. Saturn and Jupiter will appear to overlap. It's called a great conjunction. The event will look like a bright star in the southwestern sky. It's also true, the event is bright and rare and, this time, it happens near Christmas.

However, it's probably not the "Christmas Star."

To better understand this, I spoke with David Weigel, the planetarium director for the INTUITIVE Planetarium at the U.S. Space and Rocket Center in Huntsville, Alabama.

How close are the planets going to be?

To be clear, Saturn and Jupiter won't literally be close to each other. Weigel said the two massive planets, each about 760 to 1,300 times the size of Earth, will still be hundreds of millions of miles apart.

The planets appear close together because of their orbits, or their paths around the Sun. Those paths aren't a perfect circle, so when both planets and the Earth reach a certain point on their paths, they appear close together from our perspective here on Earth. During this year's conjunction, Saturn and Jupiter will appear to be 0.1 degrees apart, and that's special. It will be visible in the night sky.

This is a look at all three planets' paths leading up to December 21. 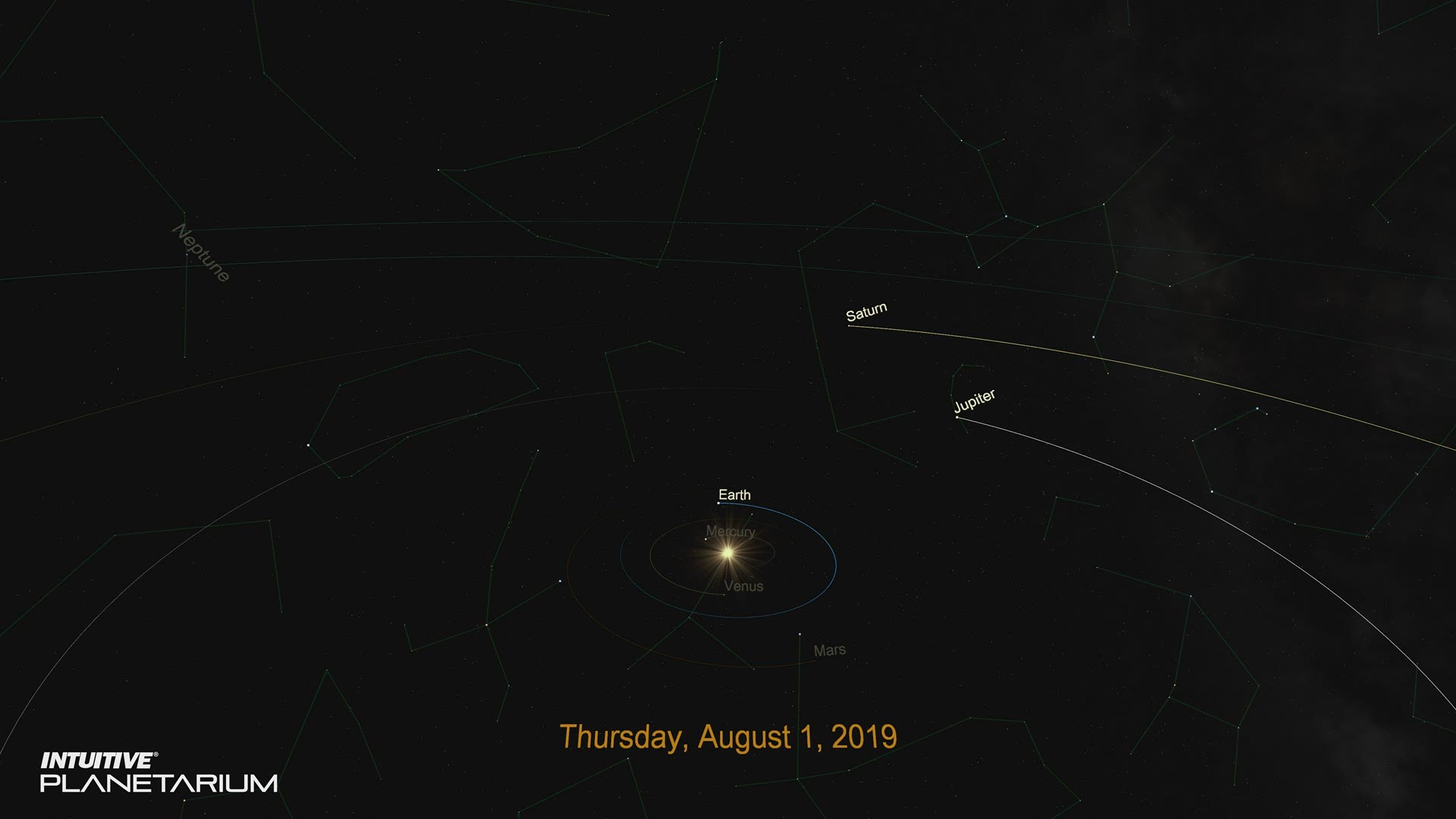 Video credit to David Weigel and Erin Nagelkirk at the INTUITIVE Planetarium at the U.S. Space and Rocket Center.

How often does this happen?

Weigel said conjunctions happen about every 20 years. The last time this happened, in 2000, the event wasn't so impressive. Saturn and Jupiter didn't appear as close together.

The last time we saw a conjunction like the one coming on December 21 was back in 1623. German astronomer Johannes Kepler had just put together his theory of celestial mechanics. Essentially, he figured out how to use math and physics to more accurately predict what the night sky looked like hundreds of years ago. Kepler was a pretty brilliant guy.

Unfortunately, the great conjunction in 1623 was a bust. Saturn and Jupiter's paths were too close to the Sun, and people likely couldn't see anything.

Before that, there was another great conjunction in 1226 AD. This one happened at night, so people likely saw it.

How bright will it be?

Weigel said don't expect anything crazy. It won't be as bright as the Moon.

"It will be a treat to look at, but don't expect some enormously bright beacon in the sky," Weigel said.

It will probably look like a very bright, motionless airplane. The event will happen in the southwestern sky, pretty low on the horizon; so you'll need to get clear of any trees or other tall structures.

Plus, the event can only be seen right after sunset. This time of year, the sun goes down sometime between 5 p.m. and 6 p.m., and it will only be visible until about 7 p.m.

Here's what the night sky will look like on December 21. If you look at the bottom right corner, you'll see two bright spots. The brighter one is Jupiter. The dimmer one is Saturn. The two planets move closer together until they overlap. 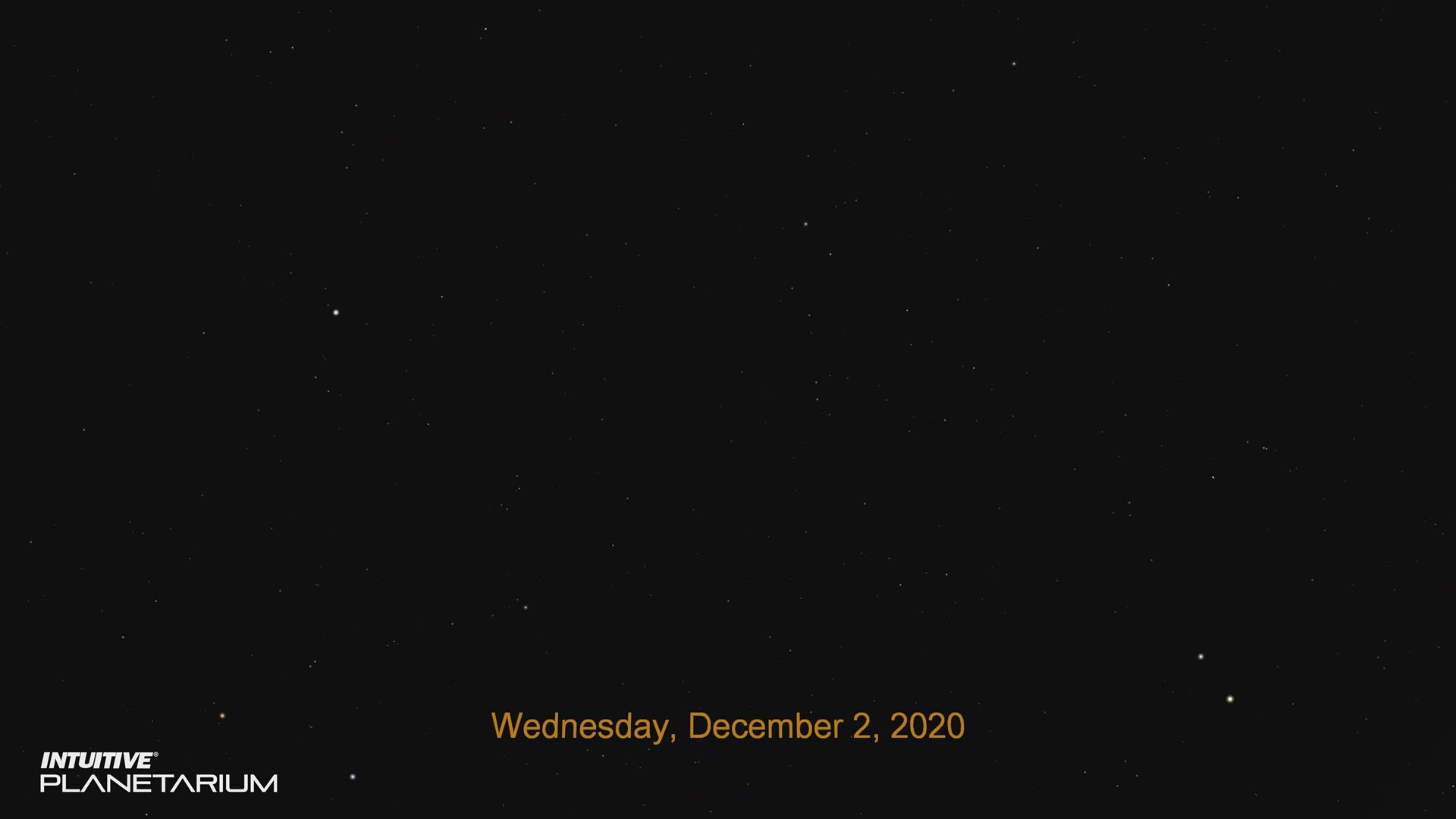 Video credit to David Weigel and Erin Nagelkirk at the INTUITIVE Planetarium at the U.S. Space and Rocket Center.

Is this the Christmas Star?

Back in 7 BC, there was a conjunction between Saturn and Jupiter, just like we're going to see this year. The two planets appeared close together. However, there are a couple of key differences.

If you want to know how that's possible, read about "retrograde motion".

The key question we have to ask: Was the event spectacular enough to motivate the wise men to travel hundreds of miles, through deserts and mountains, so they could figure out what was going on?

Weigel said Saturn and Jupiter appeared 10 times farther apart in 7 BC's third conjunction as compared to the upcoming 2020 event, so it wasn't nearly as bright as what we're going to see on December 21. He says what happened in 7 BC alone likely isn't impressive enough for the wise men to make a months-long journey.

Why do people call this event the Christmas Star?

Weigel said that's where the confusion comes from. People mistakenly take the idea of a Saturn/Jupiter conjunction, triple or otherwise, as a possible 'Christmas Star' explanation and associate it with Kepler's theory. But, there's another piece to the puzzle.

So, what was the Christmas Star?

There isn't a clear consensus.

When we ask, 'What was the Christmas Star?' we must return to the question, "Why would the wise men be motivated to travel hundreds of miles, through deserts and mountains?"

The answer depends on whether the wise men were astronomers or astrologers. Back in the age of the wise men and the first Christmas, these were one and the same.

Astronomy is the scientific study of objects in space and the physical universe as a whole.

Astrology is the interpretation of the motion of objects in space to foretell one's fate.

Did the wise men prioritize the science of space, or did they want to find the meaning behind it? It's likely a little bit of both.

Right off the bat, Weigel said the Christmas Star likely wasn't a comet or a meteor.

One of the most spectacular celestial events is a supernova, the moment when a star explodes. Weigel says there weren't any supernovas around the time of the first Christmas, so this probably isn't it.

A solid runner-up is a nova, like the one Kepler witnessed in 1603. Weigel said this is a solid choice. It would be significant to both astronomers and astrologers.

A third possibility is another conjunction. Conjunctions do carry significance to astrologers. If planets appeared to align three times in one year, the wise men looking for meaning in the stars were probably interested.

Weigel said it's possible a conjunction, or triple conjunction, was followed by something more spectacular, like a nova. If the wise men were interested in the planets lining up, maybe they were paying attention at just the right time to spot a nova in the night sky.

Weigel said the idea of multiple celestial events happening around the same time is perhaps the most plausible theory behind the Christmas Star.

The bottom line is something pretty darn cool is going to happen in the night sky on December 21, so take a moment to see it. Whether or not you can prove it's the Christmas Star is a discussion for all the other days of the year; maybe even the next 20 or 60 years.

We get to see beautiful lights every holiday season, and we don't normally see them any other time of the year. They go on trees, on homes and in yards. Some put up a whole lot, others just a few; everyone expressing different styles of celebration.

In 2020, there's one beautiful light we may not see again for far longer than one year. It will be in the night sky on December 21. Let's all look up and celebrate it.