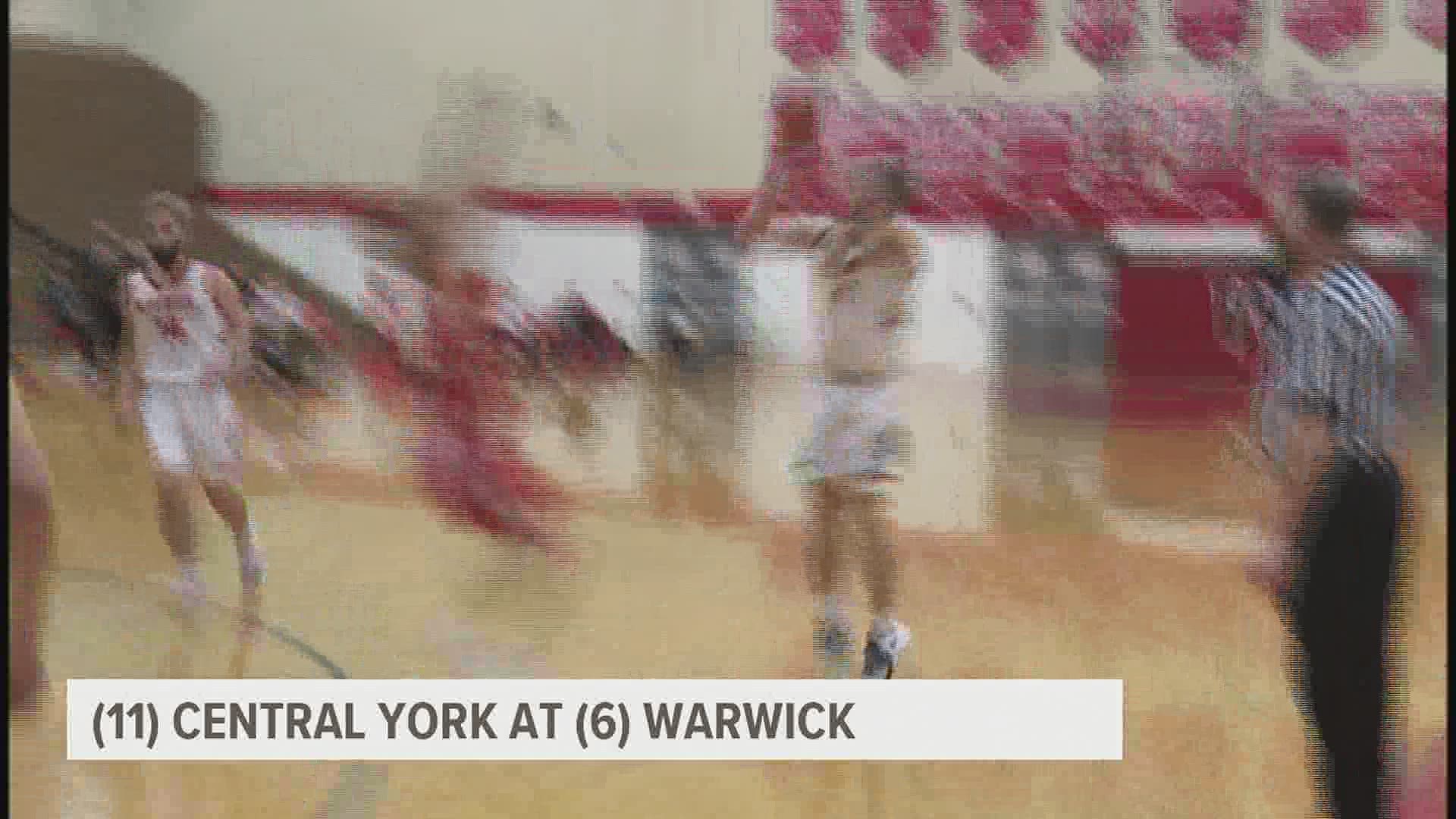 LANCASTER, Pa. — Day two of first round action for the District III basketball tournament and a bunch of good matchups for the big schools in 6A.

Warwick welcomed Central York with some college scouts in attendance.

After trailing at halftime, Central York came out fierce in the third quarter with a jumper by Steve Betancur that helped the Panthers come within three.

Anyone on the court knows you don't want a one-on-one with Warwick's Kia Cipella he has a huge block. That only gave his teammate Tate Landis fuel to his fire as he hits one, two then three 3-pointers in a row to start the fourth quarter.

"We had to stay within ourselves. It's that simple. The game isn't over until that final whistle blows. We knew this team could stay with us this whole time," said Landis.

Landis wasn't done, he then knocked down two more. He finishes with 19-points in the fourth quarter, 5-for-5 from three in the fourth to help the Warriors win their first district playoff game since 2010, 62-47 over Central York.

"It was a full out team win. We had different guys step up in different moments. It was awesome for our guys. Just to overcome some runs," said Chris Christensen, Warwick head coach. The Warriors will head to Central Dauphin on Friday.

Still in 6A play, a rematch of the Lancaster-Lebanon boys championship from this past weekend that went into overtime, Hempfield visiting Lebanon. The Black Knights get off to a great start with a 7-0 run to start the game.

The Cedars come scratching back to come within a possession.

The Black Knights wanted revenge in this game and get it to move onto the 6A Quarterfinals with a 62-58 win against Lebanon.

More 6A boys action, this time from Cumberland Valley. The Eagles host the Colts. The Colts up a dozen in the third, carnage underneath but points on the scoreboard, Trentin Smith gets the bucket and the three point play.

Don't count out the Eagles, Grant Kuffa is smooth from the corner and then Spencer Titus helps cut the lead to nine but it wasn't enough. The Colts hold off the Eagles comeback and pull the upset to win 55-43. Cedar Cliff will head to Muhlenberg Friday.

"Tough as nails mentally and physically we did feel that going into tonight that if we imposed our will and played the brand of basketball that we wanted to play it would be advantage for us. Almost 32 minutes we played that brand of basketball," said Tigh Savercool, Cedar Cliff head coach.

Two teams were forced to forfeit before the tournament even starts. For Manheim Township, the majority of their varsity squad is forced to quarantine so it's up to the junior varsity guys to go on the road and try to upset Red Lion.

Not an easy task, the varsity guys are represented with their jerseys hanging on chairs in the Blue Streaks area. No one on the floor can handle Davante Dennis, he rises to the rim to flush it thru with authority.

One of the lone varsity guys, Seth Miller doing his part for the Blue Streaks as he banked it home on the drive but it was too much from the York-Adams Division One champs as Red Lion moves on winning, 63-47.

Onto the girls side of the District III playoffs. The 5A top seed, Mechanicsburg hosted Hershey.

Wildcats start out fast as Jayden Eager three ball from the corner pocket. The Hershey bench looks for some excitement and they get it from Anna Coulter to cut the deficit to three.

Hershey would lead at the break but after, the Wildcats know what needed to be done. Mechanicsburg's Talia Jackson sets some history tonight, she finishes with 11 points. In the third Jackson, knocked down the jumper and sets a new school record for career points of 1,255 in the Wildcats win over Hershey to advance, 35-31.