Sunday Sitdown: Discussing health of local sports in a pandemic with OAL

Players, parents and coaches are making it work 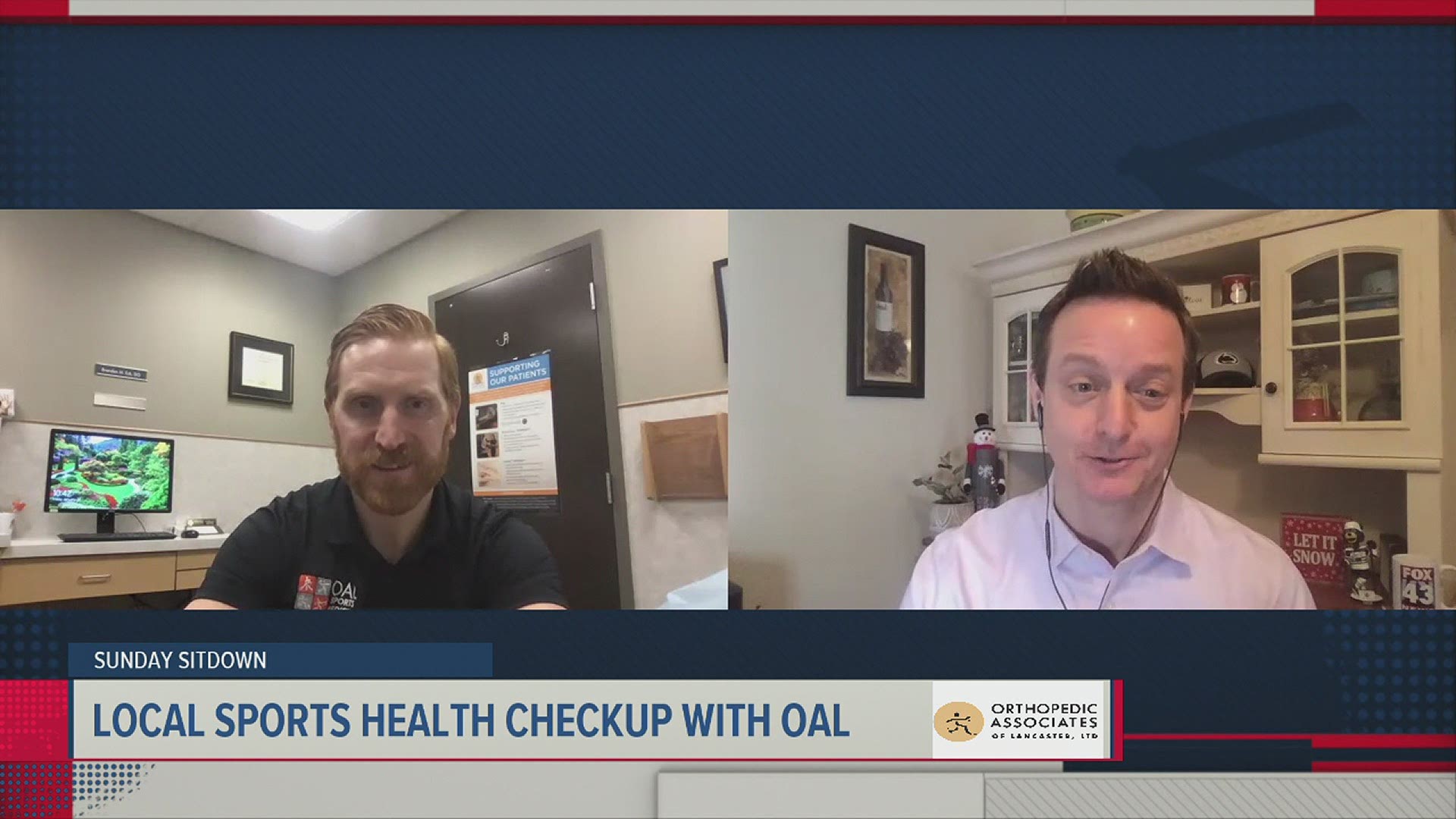 Local sports has been impacted by the COVID-19 pandemic for almost one year.  We thought it would be a good time for a local sports health checkup with Orthopedic Associates of Lancaster.  In this week's Sunday Sitdown, we speak with OAL Primary Care Sports Medicine Physician Dr. Brandon Eck, D.O.  The first subject we discuss is treating people during the tough winter months both physically and mentally.

(Dr. Brandon Eck)
"This is the strangest winter that I think we've ever encountered. In general, we had to be very dynamic and fluid with the changes that have accompanied everything. In general, most people tend to be inside more but that doesn't necessarily mean if you're inside, you are not going to be active. But for people that normally go to a gym, go swimming on a regular basis in the winter, they may not be able to do those things so unfortunately, you had to actually make a significant shift in the type of activities that you are doing and some have had to totally curtail how much activity they have been doing in general. That's been a real stressor in and of itself. At the same time, I think it's created opportunities for us to focus on some of the things that matter and spend more time with family and friends in smaller environments but also kind of do a lot of reflection."

(Todd Sadowski - FOX43 Sports Director)
"It's about one year that people have been dealing with the pandemic. From your perspective, how has COVID-19 changed local sports in our area?"

(Dr. Eck)
"Well apart from just having several disruptions in several sports, I think it's concentrated a lot of the competition and I think that's going to be interesting to see how the next one to two years goes. Particularly as we start to get back into things. In an area that is already competitive, the level of competition is only going to increase. I think that we could potentially see from pretty high level performances from a lot of athletes and it would be nice to see some championships come our way."

(Todd)
What are some areas that they need to improve on or work on as we've come to about a year dealing with this?"

(Dr. Eck)
"I think the thing that is most impressive to me about the coaches, parents and even the athletes in general is their ability to adapt and be flexible physically and mentally. It's been a real positive here when we've had a lot of focus on little things and again we've had to kind of tap into our sports psychology to a degree at least on the competitive side. More importantly, parents are listening more, athletes are more understanding, coaches are more dynamic and they are not focusing on just the score or the skills they are developing. It's also about having fun and enjoying the competition as much as we possibly can. Allowing kids to really have fun has been very helpful in all of the other aspects of their life. It's also been a little bit of a challenge and finding new ways to cope with injury or cope with the stressors of life, that's been a big challenge and I think we still have a long way to go with that going forward and I think there's going to be a lot to learn from this whole pandemic as we move out of it hopefully in the next couple of months."

(Todd)
"Certainly no one will appreciate getting out there more than the Spring athletes, we're starting to head towards that direction. That's who was shut down last year in 2020, how do you think it will be different this time around for the Spring sports as they get back outside?"

(Dr. Eck)
"I think it's going to be exciting especially for Winter sports that didn't get to have their championships, there's going to be a little bit of redemption hopefully for them to get out there and give everything they have to win some championships. Then for the Spring sports who didn't even get to compete at all, they are going to make up for lost time. For them, they are going to be going 110 percent for the next couple of months which I think is going to really cool to watch and hopefully, there is a lot of competition to go around."

(Dr. Eck)
"We do a lot of different things in the community especially with our offices in Lancaster and Lebanon.  We've been doing a lot of outreach with high schools where we have a lot of athletic trainers, servicing those areas as well as doing a lot of athlete assessments on a regular basis.  Then getting involved with community events such as Girls on the Run which is a really big event that we help with every single year.  Then also at Spooky Nook where we have another office and we are able to be involved with a lot of the tournaments and bigger events that happen throughout the year."

If you want more information about Orthopedic Associates of Lancaster, make sure to visit their website at fixbones.com.