Logan Wagner clinched his fourth consecutive Port Royal Track Championship on the night before the Tuscarora 50. The next night, wins his first Tuscarora 50. 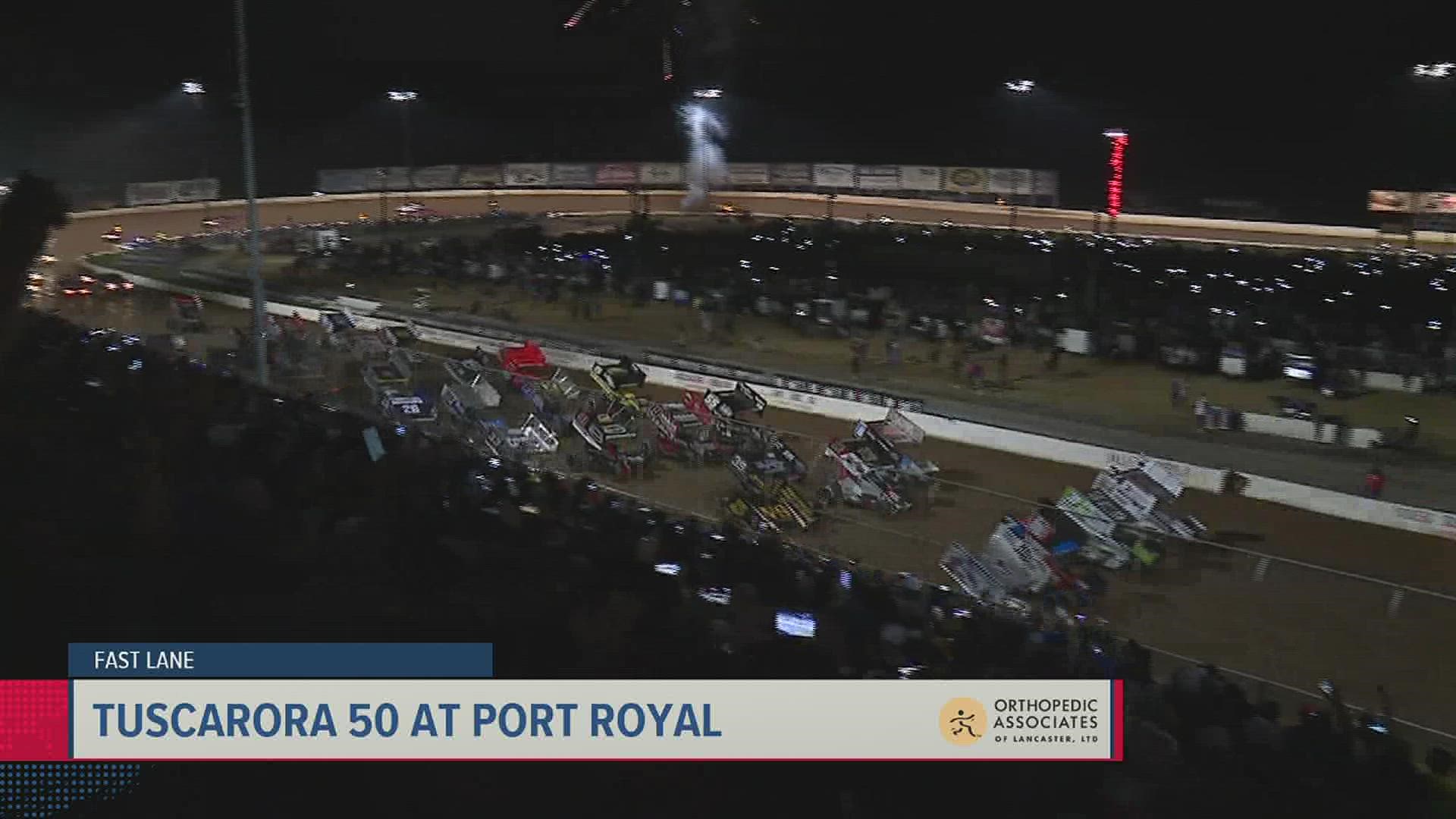 PORT ROYAL, Pa. — The stakes were high this week. It was the All-Stars verse the Pa Posse and a few invaders at the Speed Palace for the 54th Annual Tuscarora 50 but it was California dreaming for the shark Logan Schuchart.

On Labor Day, Schuchart put in the work winning his heat, winning the dash then leading all 30-laps to take the checkered at Grays Harbor.

Then, on Saturday at Silver Dollar Speedway, it was all gold for the shark with the top qualifying time then took the lead with 10-laps to go to win two races in a week breaking a two month drought.

“Used to be a place I really did not enjoy coming to its way different from Pennsylvania way different from our big half miles that are smooth and slick and you know this place is usually choopy and you're jumping around and on the edge of crashing the whole time. So, it's something I had to grow accustomed to race on and getting experience and getting better with it,“ said Schuchart won is currently 21th on the World of Outlaws all-time win list having 28 wins.

With just a dozen Outlaw races left, it’s important to have a strong finish.

Tuscarora 50: Night one of the Tuscarora 50, the posse took Thursday with the "Myerstown Missle" moving from 5th to the lead. Brent Marks nabbed the preliminary night.

Friday, the Posse and All-Stars were both denied when Invader Daryn Pittman wires the field to capture Swindell’s first win at the Speed Palace.

That same night was also a win for Logan Wagner. He added his name along side Keith Kauffman’s becoming just the second driver to win four consecutive track championships at Port Royal.

“Honestly, it doesn't even seem real. You know, to be able to classify myself in the same group as him. He's the guy that looked up to my whole entire racing career and even before and it's an honor really," said Wagner.

Dylan Yoder clinched the super late model championship with a last lap pass to knock out Gary Stuhler. Wagner had a lot of work ahead of him but showing speed having one of the fastest cars all three nights.

It was a complete sell out of the grandstands, only elbow room in the infield as the track pays tribute to the lives lost on September 11th.

Danny Dietrich led the field to green. He led every lap and as Dietrich took the checkered, Jared Esh and Aaron Reutzel get together.

Skylar Gee was disqualified after changing a right rear for the B-Main which allowed AJ Flick to be the last to transfer into the show.

One of the greatest sights, the four wide fan salute. Rico Aberu would lead the 54th Annual Tuscarora 50 field to the green flag. Moving from fifth, Lance Dewease rode the rail to check off the lap car of Flick and slides by Aberu to lead lap 12 but Dewease had problems. An oil hose came loose before he even took the lead. At the half way point, Dewease and his car were covered in oil. Couldn't even see the No. 69k on the left side of the tail tank. They dumped a few quarts of oil in.

Dewease was able to get a little relief to stay in clean air when Zeb Wise blew a left rear. When the tire exploded, it hit his wing and a lap later, the left side of the wing shears off.

Two laps later, Sunshine Tyler Courtney is in for a blown right rear.

That would be the final caution. With two laps left, Wagner does exactly what Dewease did to take the lead but he slides up a little too much and Dewease is able to hold the bottom. But, exiting turn two is where Wagner had a better run on the high-side and jumped down in front of Dewease in turn three, coming to the white flag.

He was the fastest qualifier, won his heat and now a Tuscarora 50 champion.

“I knew if he was out of the race I could probably win it but hindsight 2020, I mean, I'm so happy that he didn't and I could beat him fair and square around the bottom and I'm at a loss for words on this thing," said Wagner.

Bear hug from dad as Wagner added his name to the record books but Dewease on the other hand knows how good their car was before the oil line on the pressure gauge came loose.

“I'm not here for second. We're here to win this thing that's all we worry about. I was very disappointed because we had a good race car. I couldn't see on restarts. I couldn't see where I was going. I couldn't hit my marks. It was just the easiest way of putting it, we're driving in fog," said Dewease.

The month of money continues with the Dirt Classic Saturday and Selinsgrove and Williams Grove National Opens.