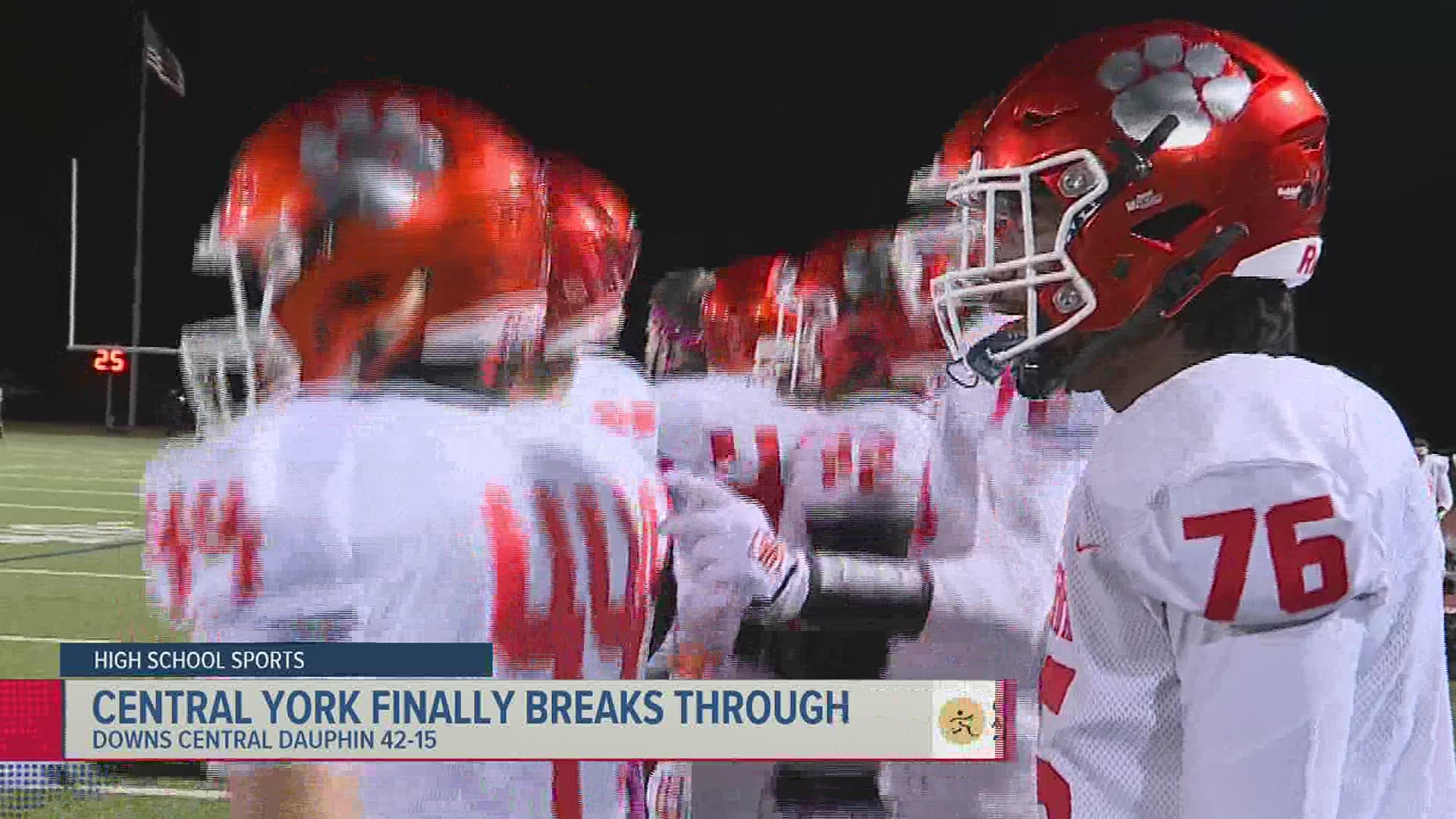 HARRISBURG, Pa. — Everyone loves a good controversy but it was time to put the debates aside, (at least briefly) for the kick-off of the District III football playoffs.  For a fleeting moment all the talk of who is in or out was upstaged by the performances on the field.

The biggest moment of the weekend came from maybe the biggest surprise to many. Central York told everyone that teams from the YAIAA can compete on the big stage as they controlled Mid-Penn power Central Dauphin the 6A semifinal. The Panthers led by junior quarterback Beau Pribula broke out big plays when they were needed the most. Judah Tomb was a favorite target on the night for Pribula.  First he did it as a receiver with a 43 yard catch to put Central York up 13-7 and then with a back breaking 40 yard catch and run with under 20 seconds left in the half to put the orange and black up 20-9 heading into the break.  Tomb then returned the second half kick 95 yards for a score.

Not to be out done the Central York defense came up with stops every time they were needed. This victory was all about proving the doubters wrong and coach Gerry Yonchiuk told his guys before the game that he had confidence this group.

"I said you have a lot to prove, I believe in you, I believe in everybody in this room. It is one hell of a football team in here tonight, and I said you are going out to win this game tonight."

This was Central York's first playoff win since the 2012 season and the first time the Panthers will play in a District III title game since 1990.

Next week it is all an York county final in 6A between York and Central York. That is the first time two York county schools will meet for a district title above the 2A classification.

In the 3A semifinals, Middletown and Bermudian Springs clashed once again. The Blue Raiders used an opportunistic defense and their vaunted power run game to advance with a big win. Coach Brett Myers likes where his team is going at the moment.

"We got to keep moving in the direction we are moving, keep playing clean football. We are just excited to be able to keep playing football at this time of the year."

Middletown will see a familiar foe in the title game with Wyomissing.  The Berks county powerhouse steamed the Bubblers of Boiling Springs over the weekend. The Spartans will bring one of, if not the best defense in the district to Middletown next week.

One classification has already moved on to the state bracket and while it may have rained on their parade Friday night the Rollers are excited to keep on, well, rolling.

It was a battle of perfect records in the 1A title game. Undefeated Delone Catholic and undefeated Steel-High.  Last season it was a come from behind victory for the Squires and while they kept this one close, this year there was no late game magic.

A big reason why was Odell Greene who carried a whopping 42 times in this one. Leading Steel-High to the 23-13 win and their first district crown since 2017.

Check out the FOX43 Sports Team YouTube channel in the video below.