After being so close the past few years, Palmyra finally wrote the ending they wanted. 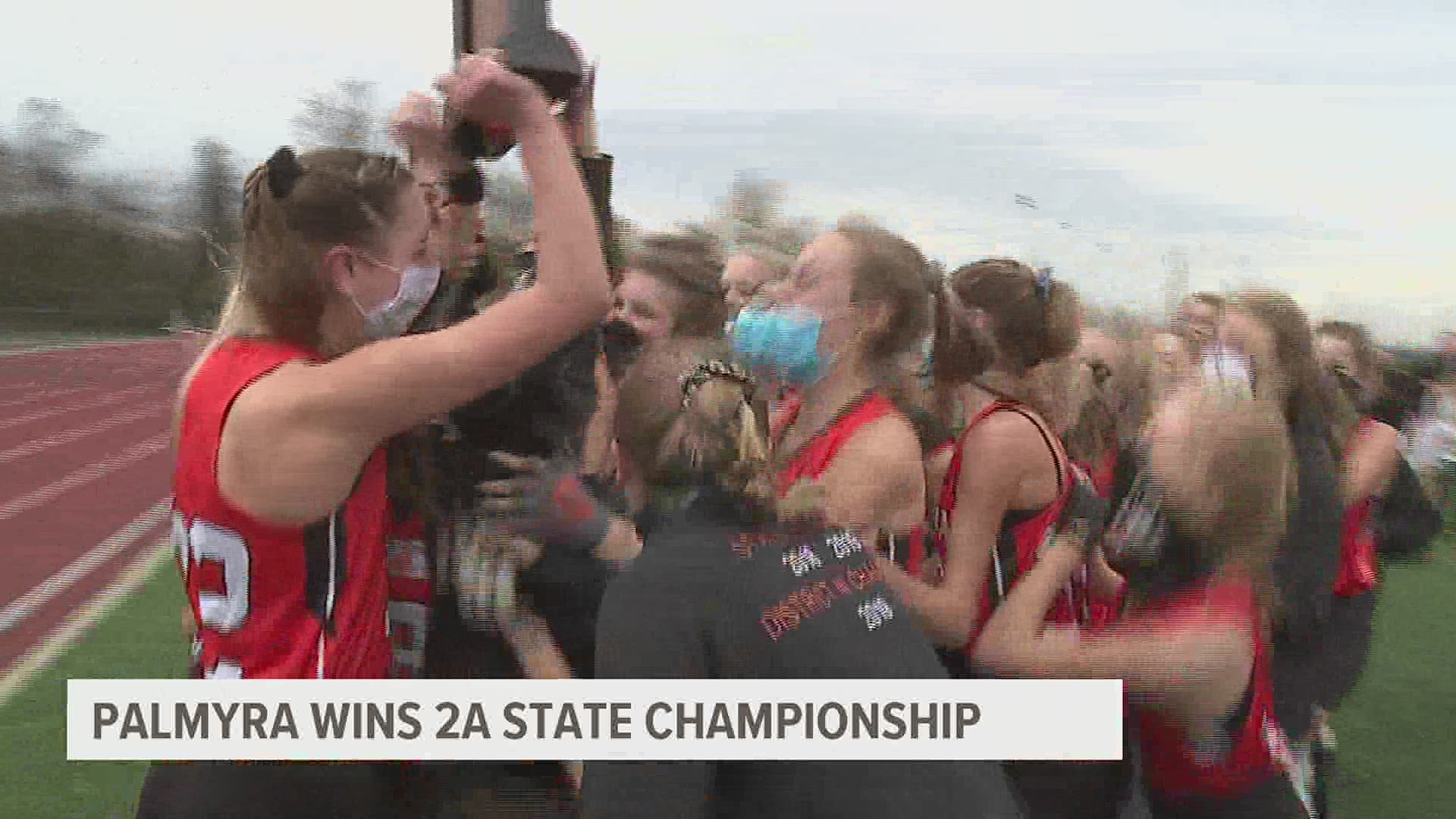 ALLENTOWN, Pa. — As darkness fell over Whitehall High School there was a mixed bag of emotions in the air Saturday night.  Joy, disappointment, accomplishment, vindication and heart break were just a few to circulate on the faces of athletes, coaches and parents.

Back in August the thought of holding state championships seemed like an after thought and a pipe dream.

Three District III teams though made it a reality.

The Palmyra Cougars walked onto the field confident in their abilities to finally claim another state title since their last one in 2014.  They had been here before, many times over the last seven years, including the past two seasons, and each time they walked away with the silver.  There may have been some thoughts in the back of their minds of a jinx or curse, but they didn't let it show. The Cougars weren't necessarily searching for vindication but they were determined to show that they deserved to be called state champions.

After finding the post of the cage twice early in their game against Archbishop Carroll, Palmyra was in a scoreless fight after dominating early.  Were there thoughts of "here we go again," possibly?

What we know is there was a focus to push through and execute. Keely Bowers did that when she reached out and poked in the first goal of the game in the second quarter.

After Carroll found the equalizer in the second, the Cougars remained undeterred. Defensively they kept the ball in front of them and controlled possession, peppering shots on the offensive end. None broke the tie and this 1A final went to overtime.

If you were to look in the stands you could see Palmyra fans had their first clutched or faces cover in worry. Some you could imagine holding rosary beads saying prayers.

Whatever thoughts that were in their minds, they were played out in real life just 65 seconds into the extra session. Off a corner, junior Anna Miller, found a loose ball down low and with grit she dug it out. Miller playing with a sprained foot, begged Coach Harshman for this opportunity. It paid off, as she pulled back, collected and paused, which seemed like an eternity. She surveyed, saw the goalie and defender guarding the net and seemingly effortlessly and calmly lifted the ball in for the golden goal and 2-1 victory.

The emotion was clear for this group of ladies who have been so close over the years but always came up just one game short.

For Coach Ken Harshman, he dismissed talk of this victory being any type of vindication but rather one dedicated to hard work and determination.

In the 1A classification the Greenwood Wildcats were back where it all began in 2017 with their state championship. This year was a cherry on top of a run that has included not only that state gold, but multiple district titles. The ending may not have been what they envisioned falling 3-0 to Wyoming Seminary but as coach Kent Houser told me after the game.

"I don't think to many would complain about that," he said referring to this run that senior class engineered.

Central Dauphin made a run into the finals, their reward facing one of the state's most storied programs Emmaus.  CD put up a fight but they just didn't have enough juice to break the Hornet's nest falling 4-0. Afterwards senior Hope Rose summed up the season and this Ram team.

Always appreciate when a high school athlete can give us the time to speak after a game in which they suffer an emotional defeat ... @CDAthletics @CDFHvarsity Hope Rose represents the Rams very well. Best of luck @TerpsFH @USAFieldHockey pic.twitter.com/DF4ZFY68F1