The Cardinals were supposed to play the Cubs on ESPN's Sunday Night Baseball. Instead, the team announced another positive test and more postponed games 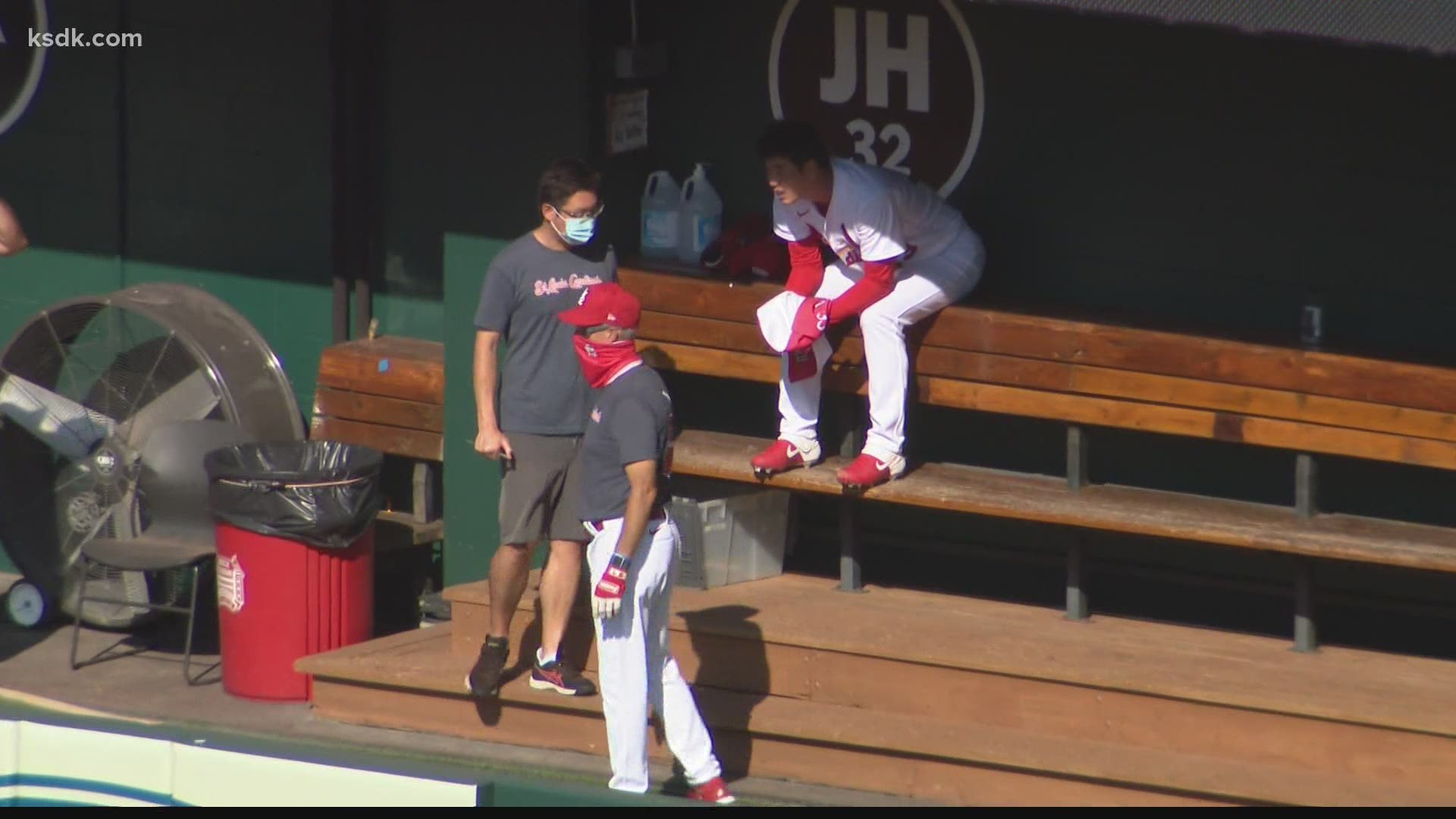 ST. LOUIS — As John Mozeliak conducted another zoom briefing with the media on Sunday night confirming a 10th Cardinals player had tested positive for the coronavirus, a baseball game was on the television behind his desk.

“We were supposed to be in that game,” Mozeliak said of the ESPN broadcast of a game between the White Sox and Indians. “Shucks.”

That broadcast — ESPN's Sunday Night Baseball — was supposed to feature the Cardinals and Cubs but that was one of three games postponed over the weekend. Three more were added to the growing list on Sunday after Lane Thomas tested positive for COVID-19. All of the test results on the other players and staff members from Saturday were negative, Mozeliak said.

The team’s president of baseball operations said Thomas’s positive test was not a surprise because his roommate, Ryan Helsley, also had previously tested positive.

The total number of players and staff who have tested positive in the last 11 days is now 17, including seven staff members. Mozeliak also was able to confirm that one unnamed player and one staff member did seek precautionary treatment at a hospital emergency room because of how they were feeling after they tested positive, but both were released after treatment.

The information on the test results was about the only certainty Mozeliak was able to offer on Sunday night, with more questions than answers available while the team waits to find out when it can safely return to the field and play a game.

“I’m not going to guess,” he said. “We will allow a few days to come and go and then we will reassess. … It’s a bummer. We’re learning as we go.”

Mozeliak said the team, and Major League Baseball, likely will err on the side of caution as it evaluates medical opinions and the daily test results to try to determine when the Cardinals have been isolated long enough that the threat of the virus spreading has become negligible.

The players and staff have now been isolated in their homes since Friday, being allowed to leave only to drive to Busch Stadium to take that day’s test, which is conducted through a drive-thru process.

“When we ended up leaving Milwaukee we ended up having additional positive tests from that,” Mozeliak said. “What’s the right amount of time to not assemble and to try to prevent spread? I don’t think we know that answer perfectly.

“We thought we waited long enough (before leaving Milwaukee) and obviously we didn’t.”

The postponement of the three-game series against the Pirates, scheduled to start on Monday night, brings the total number of Cardinals games postponed because of the outbreak to 13, and means the Cardinals will go a full two weeks, if they are lucky, between games.

Starting on Thursday, there will be 46 days left on the calendar before the season is scheduled to end on Sept. 27.

Mozeliak said he has not thought too much about the odds of playing 55 games in that length of time, preferring to concentrate on the health and well-being of the team’s players and staff.

“We’re dealing with people who are sick. The reality is this has hit very much to home,” he said. “We have friends and colleagues who aren’t doing well because of that and it shows you powerful COVID-19 is. There are people who have shown no symptoms, but there also are people who are being affected. To me it’s scary.”

One of the players Mozeliak has thought most about is Kwang Hyun Kim, who signed with the Cardinals over the winter and left his family behind in South Korea when he reported to spring training in February in Florida.

“I remember when we were loading up the other day (to leave Milwaukee) I looked at KK and thought, ‘Oh my gosh.’ Here’s a guy to fulfill his dream came over to play baseball in the United States and our country has mishandled this pandemic and South Korea has controlled it. Instead of him playing baseball all of a sudden he’s been sidelined for so long because this pandemic is out of control here.

“Then of course it hits our team and sidelines our team. Here’s a guy who hasn’t seen his family for six months. I was just sad for him. He’s always happy, he’s always smiling. This can’t be good. You’re living in a foreign country, you don’t speak the language. There’s nothing we can do.”

The team’s traveling party was isolated in their hotel rooms in Milwaukee for more than five days before two days of 100% negative test results allowed the team to travel back to St. Louis on Aug. 5. The team worked out that day and Aug. 6 at Busch Stadium, then learned the next day of three more positive tests, two players and a staff member, that they believe still could be traced back to the original outbreak.

That forced the postponement of the series against the Cubs, and the new result on Sunday led MLB to postpone the games against the Pirates. In a press release, MLB said, “In light of the most recent positive test results, MLB and the club believe it is prudent to conduct additional testing while players and staff are quarantined before the team returns to play.”

“We can’t have a repeat of what we just saw,” Mozeliak said. “We thought we were clear, we thought we were good and then 48 hours later we’re told we have a positive. And then you end up with what we’re dealing with now.

“That’s the concern. That’s the problem we all have right now is trying to ensure that people who are negative stay negative and before we re-assemble as a group we have the confidence that that’s going to happen.” 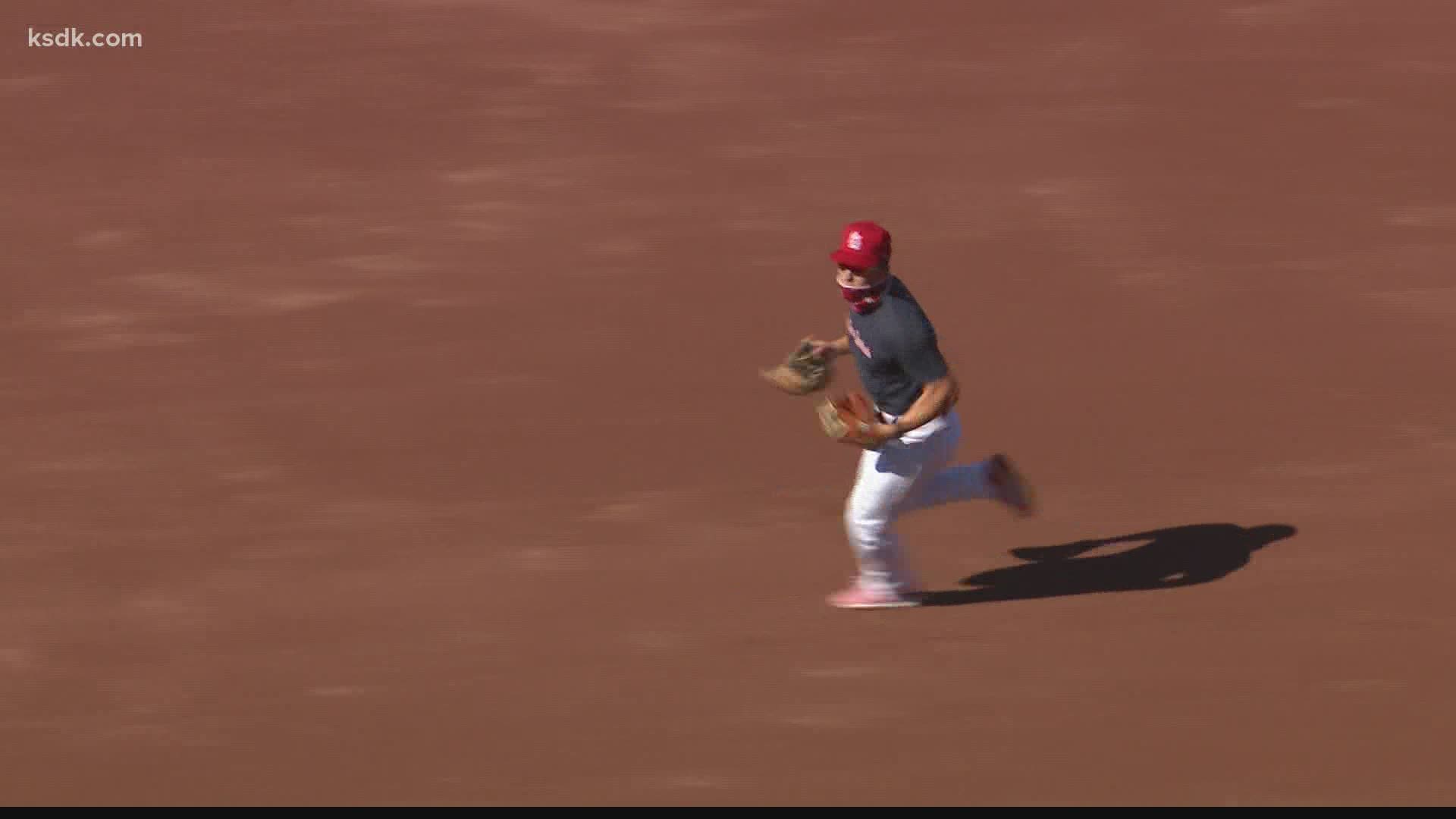