Heather Zimmerman shares how her husband spent the 2020 season away from baseball, and how the family is happy to see Ryan on the field once again. 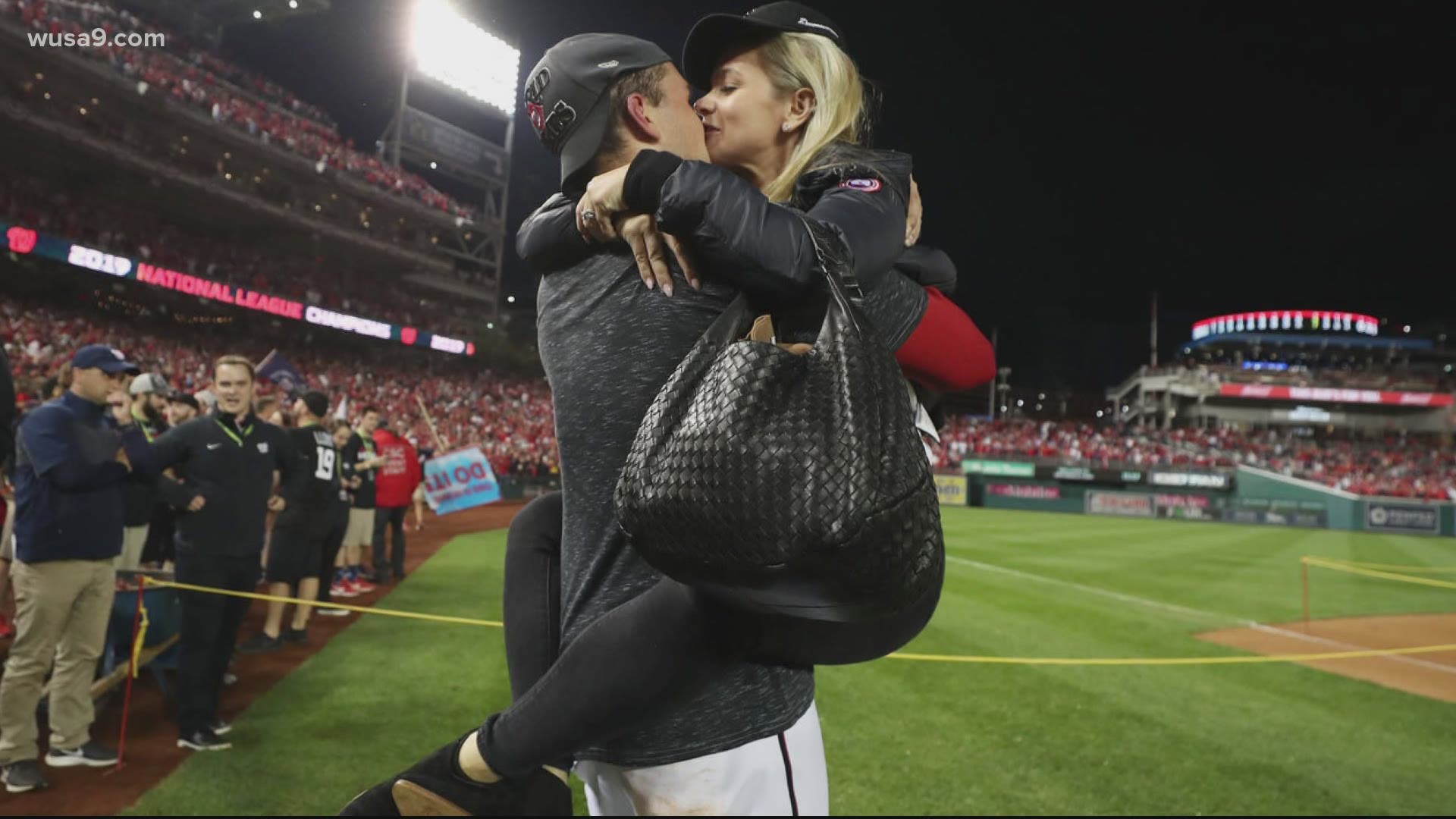 WASHINGTON — The saying goes that behind every great man, there is a great woman. For this story that woman is Heather Zimmerman.

The wife of longtime Washington Nationals infielder Ryan Zimmerman, Heather may be a huge reason why he decided to come back for his 16th season.

“Before Ryan made any decision on his future, he asked for my opinion. I said 'absolutely, you should play as long as they let you,'” said Heather Zimmerman.

Ryan Zimmerman decided to opt out because of COVID-19 concerns before the start of the 2020 Major League Baseball season. At the time, he said in a statement his family factored into his decision. His mother was diagnosed with multiple sclerosis in 1995 and is at high risk for complications from the coronavirus.

Ryan and Heather Zimmerman also have three young children, including a newborn, which also played a crucial role in his decision last year.

“I was not surprised because of his character ... That’s the guy that I married. He always puts family first. It meant a lot to us as a family. Keeping our family safe is cool. I know how hard it was for him to make that decision"

Having Ryan at home was great for Heather. Their new baby was born in June, and Ryan was there to help out with the two older kids, during a hectic time bringing their newest addition into the world.

Like always, he was super involved with the kids' school work, projects, and other extracurricular activities. However, a few weeks after the baseball season started, Heather noticed Ryan getting a little antsy about baseball.

“It was messing with my routine with the kids,” Heather said jokingly. “We loved having him at home, but I learned he also loves hanging out with his teammates”

Ryan and Heather married in January 2013. Since then -- three kids, a World Series ring, an All-Star Game appearance for Ryan in 2017 - shows that a mix of baseball and family time has paid off for this couple.

“This is going to be the first year I’m going to be going solo. I will be there but it’s going look a little different than what we are used to," said Heather about Opening Day at Nationals Park.

Usually, Ryan’s parents come up from Virginia Beach. Heather is local so her parents would attend opening day too, along with Heather and Ryan’s kids.

The last time Heather has seen Ryan play an actual game that counted was almost a year and a half ago when the Nationals defeated the Astros to win the World Series.

Aww... you all have been so sweet with welcoming Ryan back to the team! 17 years of @Nationals hype!! We are all THRILLED for him to play again and are crossing our fingers that these can see some ballpark action!! ⚾️🎉 pic.twitter.com/36ayYDFhto

RELATED: 'He's the face of the Nationals' | Ryan Zimmerman gets ready for his 16th season with Nationals

When the Nationals play the New York Mets on Opening Day, Heather admits, she will get emotional.

Ryan Zimmerman was the first-ever Major League Baseball draft pick for the Washington Nationals franchise back in 2005. Since then, he has only played in Washington, giving reason to why fans call him "Mr. National."

Zimmerman signed a one-year, $1 million deal to play for the Nationals this season. He’ll be 37-years-old when the season is over.

Just like this season, if Ryan wants to play another season of baseball, his wife Heather already gave the green light to go for it.

“He can play for as long as he can hobble out there onto the field. I love him. I love having him around and at home. I learned how much he loves to play the game. It makes all of us happy. It’s special but we know it will come to end one day."

SUBSCRIBE: The Locked On Nationals podcast is on Apple Podcasts, Spotify, Stitcher and wherever you listen to podcasts.