On the Locked On Today podcast, we break down the Field of Dreams game, Kawhi Leonard's new deal, the Patriots' first preseason game, BYU's NIL deal and more. 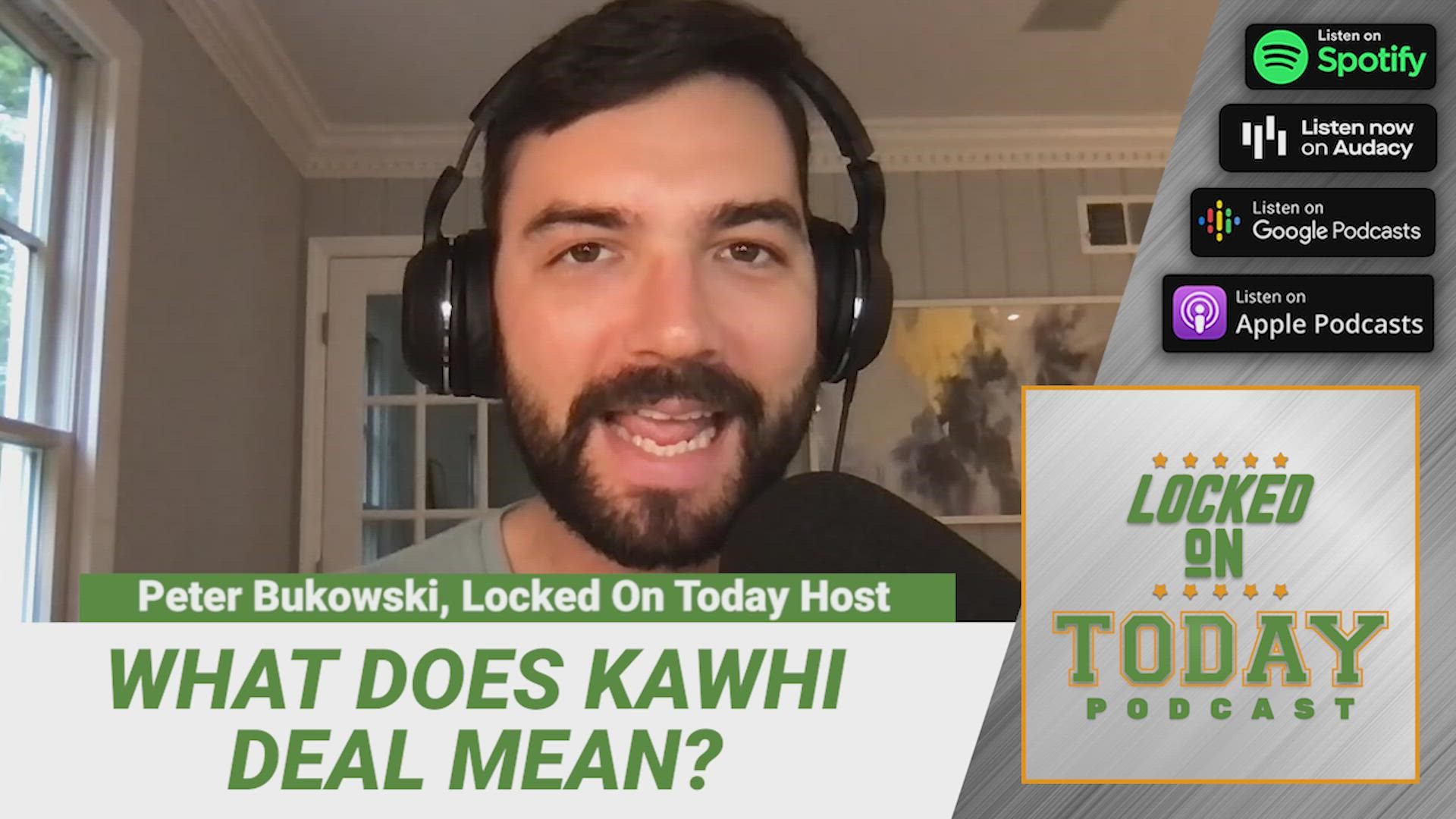 DYERSVILLE, Iowa — The first ever MLB game in Iowa did not disappoint.

Eight home runs, a walk-off winner and 17 total runs., all in a cornfield in Iowa.

On Friday's Locked On Today podcast, we recap the Field of Dreams game, talk Kawhi's Leonard's new deal in Los Angeles, take our first look at the New England Patriots and speak with Built Brand CEO Nick Greer on a groundbreaking NIL deal with BYU.

We saw action from both Cam Newton and rookie first round pick Mac Jones, but the real story for the New England Patriots in their first preseason game was rookie 4th-round pick running back Rhamondre Stevenson out of Oklahoma, who rushed for 127 yards and two touchdowns on 10 carries.

Locked On Patriots host Mike D'Abate joined Locked On Today to talk about what he saw with our first on-field look at the Patriots and Mac Jones.

"Mac Jones still looked like a rookie at times and there are teaching moments, you saw him sitting with Josh McDaniels, talking to Bill Belichick. He is still learning the ropes in this offense," D'Abate said. "But the one thing that I was very impressed with is the poise that Mac Jones showed. I thought he showed great footwork, he continuously shows the ability to shed the ball early. He's got a very quick release. And he processes the play very quickly, especially for a rookie, really for any quarterback."

D'Abate said Stevenson was definitely impressive, but don't expect him to carry a big load in the regular season.

"I definitely think that Rhamondre Stevenson  is a big part of what the Patriots want to do in their running game moving forward into the future. But we have to remember that Bill Belichick takes a temporary approach when grooming his running backs. He usually red shirts his running backs when they're rookies, giving them a chance to hold the clipboard learn a little bit more about the system," D'Abate said.

"We saw the skillset that Rhamondre Stevenson brings to the table on Thursday. He can run for power. He had a couple of nice power side steps, one of which he got in for a touchdown. And then you can also see that he can run with finesse and he can run with speed, breaking for a 91 yard touchdown. I really like what I see how to remind Ray Stevenson kind of that dual threat running back that the Patriots would love to pair alongside Damien Harris."

The first MLB game in Iowa was a thriller at the White Sox defeated the Yankees 9-8 on a walk-off 2-run homer by Tim Anderson.

Stacey Gotsulias of Locked On Yankees joined Locked On Today to break down the game and measure where the Yankees are at in their season.

"I had a bad feeling when Zack Britton was brought in, because I've watched him all year. So I, I kind of had a feeling something bad was gonna happen," Gotsulias said. "When Aaron Judge made it 7-6, I thought, that's nice, at least they made it close. And I was kind of hoping it would end there. Then Gallo gets the walk. And then Stanton hits the home run. And I'm like, they're gonna break it all. No, not again. Because the Yankees have had so many games like this, where it turns from being a really good game to being a heartbreaking loss in about two seconds. So we're kind of used to it by now. But what are you gonna do? I mean, good for the White Sox."

The Yankees have been hot since the All-Star break, have won five series' in a row heading into this series with the White Sox and are now just two games out of the Wild Card behind Boston.

Kawhi Leonard has agreed to re-sign with the Los Angeles Clippers on a 4-year $176 million deal. It was a bit unexpected, but a pleasant surprise for Clippers fans.

While Leonard may miss much of next season due to a partially torn ACL, what does this move mean for the future of the Clippers in the Western Conference picture? Charles Mockler of Locked On Clippers joined Locked On Today.

"This locks up a top three player in the NBA and it locks up a top 10 in Paul George for the next handful of years. Also the fact that this is a four year deal and not a one and one gives the Clippers cap flexibility, there can be some maneuvering, we have some tradable contracts like that," Mockler said. "This front office is very good at trades and not very good at drafting, so this is the best possible scenario."

Does this make the Clippers Western Conference favorites over the next several years?

In total, 123 football players with BYU will enter into agreements directly with Built. Of those include 36 walk-on players in the program this year.

"We thought how can we do something that involves the family? And to unify this team like no other because it's not about one player, it's about every player," Greer said. "And that's what we believe as far as NIL is concerned. Every player on a college team, how can they benefit from this? And we went immediately to the to the walk-ons, and then to all 123 players from there."

"I think in life right now, we're all about the one, we're all about the individual," Greer said. "We're all about me, you know, our hope and desire that most of these athletes out there can realize is, wait a minute, it's not about me. In fact, when I get off the field, it's not gonna be about me, it's gonna be about others. It's about lifting others. And so our hope and desire is basically that spirit, this is about family, this is about team and how can I make an impact in the world."

Hear the whole conversation on Locked On Today.

What are we Locked On Today?