Manning’s father, Archie, received the Distinguished Citizen Award in 2016. The Mannings are the first father-son recipients of the award. 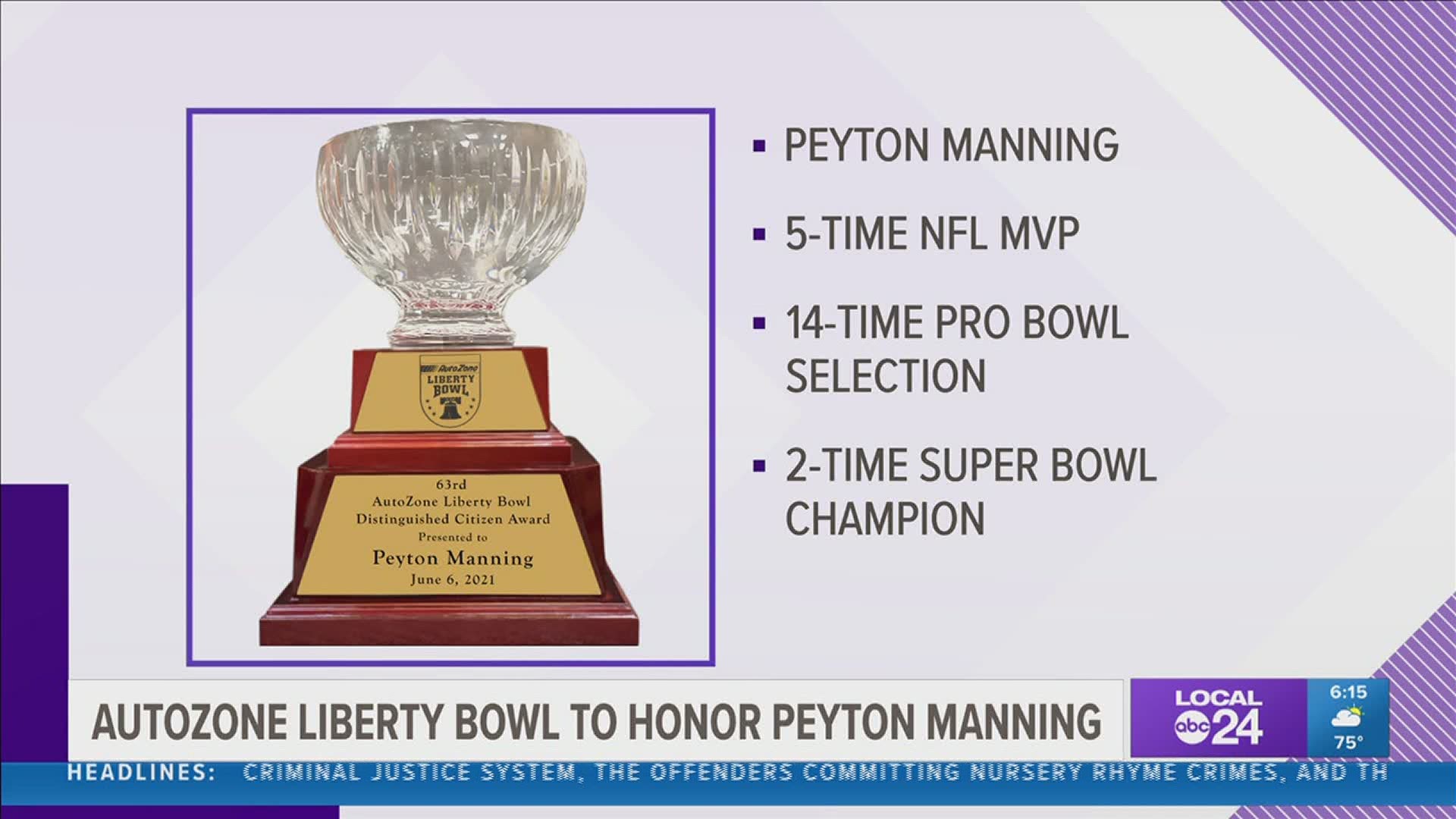 MEMPHIS, Tenn. — Peyton Manning, the NFL’s only five-time Most Valuable Player and a 14-time Pro Bowl selection, will be the guest of honor and will receive the AutoZone Liberty Bowl’s most prestigious recognition, the Distinguished Citizen Award, on June 6, 2021. Manning’s father, Archie, received the Distinguished Citizen Award in 2016. The Mannings are the first father-son recipients of this award from the AutoZone Liberty Bowl.

Peyton Manning, a 2-time Super Bowl Champion, will be here to receive the award on Sunday, June 6 at the Hilton Memphis Hotel. A cocktail reception will begin at 5:30 p.m., followed by dinner and the award presentation at 6:30 p.m. A live auction and silent auction will also be held during the evening, with 100% of all proceeds going to St. Jude Children’s Research Hospital. The 26th Annual AutoZone Liberty Bowl Golf Classic will be held the following day, Monday, June 7 at TPC Southwind.

“The AutoZone Liberty Bowl has a long history of excellence and is one of the most tradition-rich college football bowl games in America. To be recognized with the 2021 Distinguished Citizen Award by such an outstanding organization is a tremendous honor,” said Manning. “Many exceptional American icons in business, sports and entertainment have received this award, including Elvis Presley, Tony Dungy and my father. I very much appreciate the AutoZone Liberty Bowl including me on this list of incredible individuals.”

We are proud to present the @AutoZone Liberty Bowl Distinguished Citizen Award to 2-time Super Bowl Champion Peyton Manning on June 6, 2021. Please join us at the @HiltonMemphis for a dinner and auction benefiting @StJude.

Legendary quarterback Peyton Manning, the NFL’s only five-time Most Valuable Player and a 14-time Pro Bowl selection, has earned his place among the greatest quarterbacks in league history as one of the leaders in nearly every statistical passing category.

During the 2015/2016 season, Manning led the Denver Broncos to a 24-10 win over the Carolina Panthers in Super Bowl 50, making him the first starting quarterback in NFL history to win a Super Bowl with two different teams.

Manning entered the NFL in 1998 with the Indianapolis Colts as the first overall draft pick. When he retired in 2016, Manning held numerous records including the most career touchdown passes in league history in addition to ranking first all-time in completions and passing yards. Named a first-team All-Pro selection by the Associated Press on seven occasions, no quarterback in NFL history had more playoff appearances or 300-yard passing games than Manning when he retired.

In 2013, Manning was named Sportsman of the Year by Sports Illustrated. In his first year with the Broncos in 2012—and after missing the entire 2011 campaign with a neck injury - Manning finished as the Associated Press NFL Comeback Player of the Year and runner- up for the league’s MVP.

During his first 14 NFL seasons with the Colts, Manning set club records in nearly every career passing category. He led the franchise to its first World Championship in 36 years during the 2006 season, earning MVP honors in the Colts’ 29-17 win over the Chicago Bears in Super Bowl XLI. In 2017, the Colts honored Manning by retiring his number 18 at Lucas Oil Stadium.

He will be enshrined into the Pro Football Hall of Fame this summer.

During his time at the University of Tennessee, Manning epitomized the term “student-athlete.” He claimed 43 records at the school, conference and national levels while graduating with Phi Beta Kappa honors. He led Tennessee to an SEC Championship as a senior in 1997 and earned consensus All-America honors. Following his senior season, Manning was honored with the Sullivan Award for the nation’s top amateur athlete based on character, leadership, athletic ability and the ideals of amateurism. In 2005, the Volunteers retired his number 16 and in 2017, he was inducted into the College Football Hall of Fame. Most recently, Manning was named to ESPN’s College Football 150: College Football’s 150 Greatest Players list announced in January 2020.

He has also received numerous awards for his philanthropic work off the field and was honored as the recipient of the Byron “Whizzer” White Humanitarian Award and the NFL’s Walter Payton Man of the Year in 2005, the Bart Starr Award in 2015, and the Lincoln Medal in 2017.

fundraising events throughout the year. He also sits on the American Red Cross National Celebrity Cabinet – lending a hand during disaster relief.

He and his wife, Ashley, established the PeyBack Foundation in 1999 to promote the future success of disadvantaged youth by assisting programs that provide leadership and growth opportunities for children at risk. The PeyBack Foundation has provided more than $14 million of impact to disadvantaged youth through its grants and programs since its inception. Manning is a champion for the Peyton Manning Children’s Hospital at St. Vincent (Indiana); serving as an ambassador, advocate and fundraiser. Peyton and Ashley co-chair the signature fundraising event for the hospital each spring, which raises money to expand and enhance departments and services offered.

Manning hosts and writes the NFL version of Detail on ESPN+ and is the host and executive producer of Peyton’s Places, which is currently airing on ESPN+. He balances these projects, while continuing his iconic commercials and various business partnerships.

About the Distinguished Citizen Award:

As the 7th oldest college football bowl game in America, the AutoZone Liberty Bowl was founded on the principles of freedom, patriotism and liberty. One of the Bowl’s time-honored traditions is the annual presentation of the Distinguished Citizen Award. The award has been presented to a cross section of prominent Americans from a wide range of professions, including military commanders, governors and congressmen, as well as leaders in business, medicine, education, entertainment and sports.