Middletown and Wyomissing, the two participants in Saturday’s District 3 Class 3A championship game, are certainly no strangers to one another. This is th... 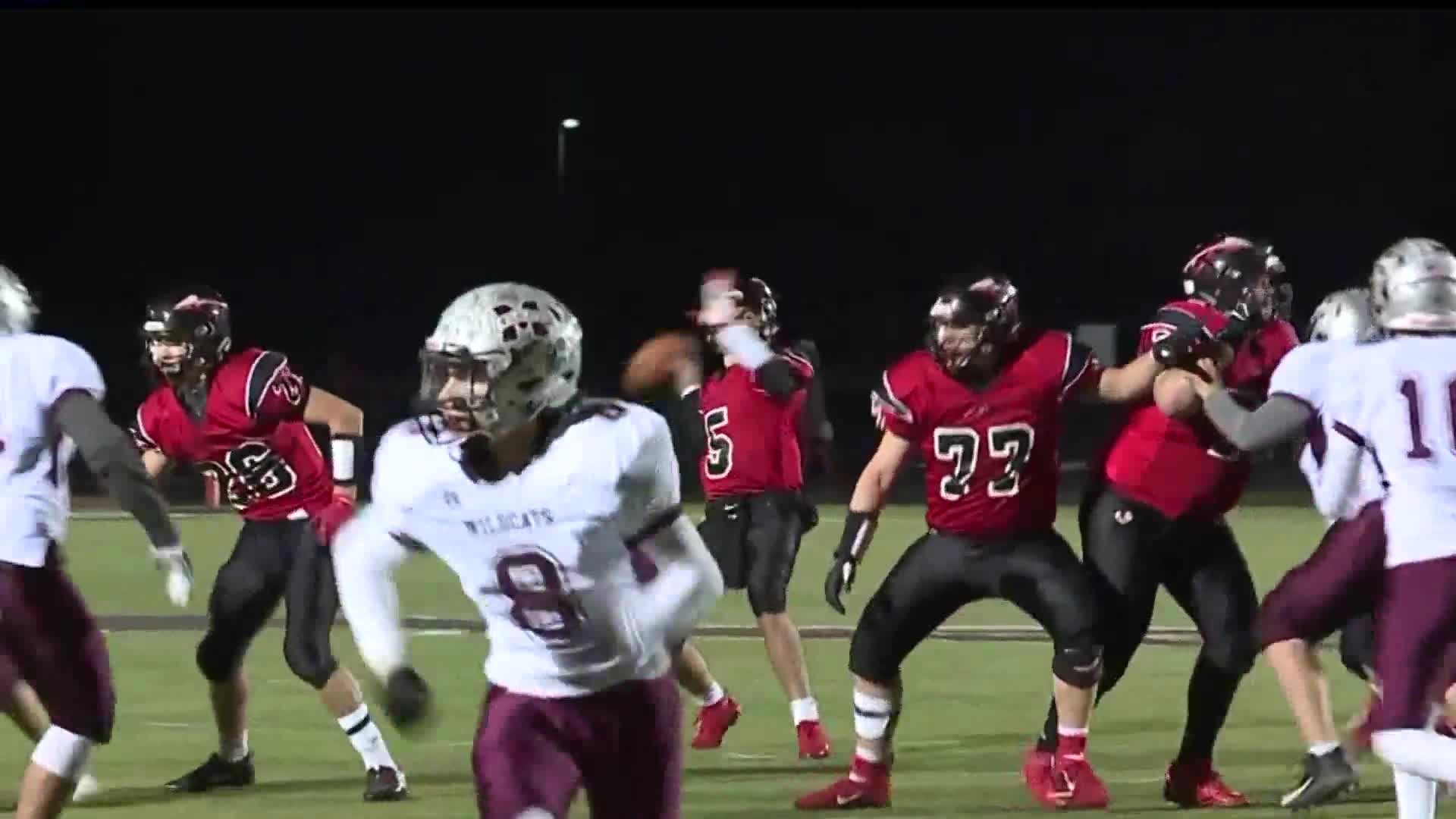 Middletown and Wyomissing, the two participants in Saturday's District 3 Class 3A championship game, are certainly no strangers to one another.

This is the fourth consecutive season the teams have met in the playoffs, and the third time in four years that they'll be competing in the finals.

Middletown, the three-time defending district champ, knocked off Wyomissing 41-6 in last year's semifinal, so the Spartans will be looking for revenge on Saturday when they host the Blue Raiders in Berks County.

Kickoff is at 1 p.m. Here's a preview of the game.

The top-seeded Spartans clobbered Annville-Cleona 62-28 last Friday, riding a career performance from Evan Niedrowski, who ran for 162 yards and scored three touchdowns. Wyomissing scored touchdowns on all nine of its possessions and racked up 575 yards against the Little Dutchmen -- all but 65 coming on the ground.

Max Hurleman added 126 yards and two TDs on 11 carries for Wyomissing, which booked its eighth trip to the district finals. The Spartans are 2-5 in championship appearances, with their last title coming in 2014. Wyomissing fell to Middletown in the semifinals last season.

The Spartans captured the Berks League Section 2 championship in the regular season and led the league in rushing, averaging 301 yards per game. Hurleman is Berks County's third-leading rusher, with 1,168 yards and 15 touchdowns on 110 attempts. Niedrwoski has 653 yards and 15 scores on 113 carries for the Spartans.

Middletown also has a two-pronged ground attack, and it was clicking on all cylinders in last week's 33-15 victory over Lancaster Catholic. The Blue Raiders got three TD runs from Jose Lopez, who finished with 169 yards on 25 carries, and a 92-yard scoring burst from Tymir Jackson, who finished with 140 yards on nine attempts. Middletown rolled up 293 yards on the ground and 428 total yards in its impressive victory over the Crusaders.

Tony Powell completed six of 11 passes for 135 yards and a touchdown for the Raiders.

Lopez has 1,564 yards and 19 touchdowns on 201 carries this season. He's got more than 6,000 career rushing yards and Middletown. The 5-9, 190-pound senior reportedly received a scholarship offer from Georgetown over the weekend, and already has offers from Dartmouth and Moravian.

Middletown has captured three straight District 3 Class 3A championships and has made three consecutive runs to the state championship game, though the Raiders have fallen in the final all three times.

The District 3 Class 4A playoffs continue Friday night with a pair of semifinal matchups.

Defending champion Bishop McDevitt hosts familiar playoff foe Lampeter-Strasburg in one semifinal matchup, while Berks Catholic and Milton Hershey meet for the second straight season on the other side of the bracket.

The winners will play in next Friday's championship game at the home of the higher seed.

Here are previews of both games:

The host Crusaders won a rematch with Mid-Penn Keystone Division rival Susquehanna Township 21-7 last week, defeating the Indians for the second time in three weeks. Now the defending Class 4A champions will attempt to book their third straight trip to the title game. They get a familiar foe in Lampeter-Strasburg; McDevitt defeated the Pioneers 47-17 in the 2017 Class 4A semifinals and are 4-0 all-time against L-S in the district playoffs.

This season, McDevitt finished second to Cedar Cliff in the Keystone race. The Crusaders got off to a slow start and were 2-3 at the season's halfway point -- a slump that included a 20-17 loss to the eventual division champs. But McDevitt got hot in the season's second half and enters Friday's game on a six-game winning streak.

Against Hanna last week, McDevitt got a pair of touchdown runs from freshman Marquese Williams, who carried 16 times for 116 yards in all. The Crusaders also scored a defensive touchdown on a 30-yard pick-six by Ben Marisco. McDevitt held Hanna to 193 total yards and three first downs. The Crusader offense racked up 254 yards despite playing with starting wide receivers Mario Easterly and Omari Hopkins.

Williams has emerged as McDevitt's top playmaker and is closing in on the 1,000-yard milestone for the season. He's got 933 yards and 14 touchdowns on 137 attempts. QB Lek Powell has completed 139 of 222 passes for 1,780 yards and 15 TDs. Easterly, who was held out last week on what was termed a coach's decision, has caught 51 passes for 739 yards and seven TDs. Hopkins, who was injured, has 20 catches for 492 yards and three scores.

L-S reached the semifinals with a 27-18 victory over York Suburban, the previously unbeaten top seed. It was the fifth straight win for the Pioneers, who finished third in the L-L League Section 2 race. Quarterback Connor Nolt, who missed the Pioneers' playoff-opening 34-7 victory over Elco with an injury, returned to the lineup to score the decisive touchdown with a seven-yard run in the fourth quarter that stretched his team's lead to eight points.

Prior to that, Suburban had rallied from a three-touchdown deficit to cut the L-S lead to 21-18. The Pioneers won the game despite being outgained 323-274 in total yardage. Alex Knapp scored a pair of touchdowns and rushed for 95 yards on five carries for L-S. One of Knapp's TD runs was an 85-yarder.

The Pioneers are chasing their second district title. Their last crown came in 2007, when the defeated Gettysburg 35-21. L-S is 15-11 in overall in the playoffs.

Berks Catholic, the No. 3 seed, held off sixth-seeded Gettysburg 14-7 in last week's quarterfinals, riding a 307-yard performance on the ground and a defense that held the Warriors to 244 total yards and a single visit to the end zone. The Saints got touchdowns from Colby Newton and Abdul Macfoy, who both cleared the 100-yard plateau in the victory. Macfoy, the team's leading rusher, had 113 yards on 15 carries and scored on a 35-yard run in the third quarter. Newton had a 64-yard TD run and finished with 119 yards on seven attempts.

BC has won five of its last six games. The Saints, who fell to Class 3A finalist Wyomissing 23-0 in Week 10, finished second to the Spartans in the Berks League Section 2 race. Their other three losses were non-conference setbacks that occurred early in the season; the most notable a 31-6 loss to Class 6A finalist Central Dauphin in Week 3.

Macfoy leads BC with 821 yards and 12 touchdowns on 102 carries, while Newton has chipped in 489 yards and six scores on 62 attempts. QB Bradley Hoffman has completed 32 of 91 passes for 370 yards and three TDs; so it's clear the Saints depend heavily on their rushing attack.

BC is trying to get back to the district finals for the third straight season and the seventh time overall. The Saints fell 41-31 to McDevitt last year, and are 4-2 in the finals overall. Their last title came in 2017, when they defeated McDevitt 45-24.

Milton Hershey is the No. 2 seed in the 4A bracket. After sitting out the first round on a bye, the Mid-Penn Capital Division champions defeated Conrad Weiser 22-10 in last week's quarterfinals. It was the ninth straight victory for Milton Hershey, whose only loss was a 20-13 setback to Susquehanna Township in Week 2.

Against Conrad Weiser, running back Tigere Mavesere rushed for 216 yards and two touchdowns to lead the offense. The Spartans also got a pair of TDs from wideout Josh Parra (4-104), while Dion Bryan racked up 109 yards on two receptions and scored on a 16-yard run. Terrill Chadwick added 80 rushing yards for Milton Hershey.

This is as deep as the Spartans have ever gotten in the District 3 playoffs. They are 4-12 overall in their playoff history, with seven previous visits to the semifinals. Berks Catholic defeated Milton Hershey 49-21 in the semifinals last year.

The District 3 Class 5A playoffs continue Friday night with a pair of semifinal matchups.

Top-seeded Cocalico hosts Warwick in one semifinal matchup, while Cedar Cliff faces Exeter Township in the other.

Friday's winners advance to the championship game, which will be held Nov. 22 at the home of the higher seed.

Here's a look at Friday's matchups:

Their high schools might be located less than 15 miles apart, but Friday night's District 3 semifinal clash between Warwick and Cocalico marks the first time the northern Lancaster County neighbors have met on the field since 1978, according Ephrata Review sports editor Todd Ruth.

Looking forward to Friday's District semifinals between Warwick and Cocalico. Did you know...according to our archives, this will be the first time these two teams have faced one another since 1978. Warwick won that one 38-0. @BruceMorgan8 @CocalicoSports @WarwickWarriors

The top-seeded Eagles won a rematch with Governor Mifflin in the semifinals, riding another stellar two-way performance from senior quarterback/defensive back Noah Palm to a 42-14 victory. Palm, University of New Hampshire recruit, rushed for a team-high 91 yards and four touchdowns while running Cocalico's Veer offense, and made a game-changing defensive play by sacking Mifflin QB Kolbie Reeser, forcing a fumble, and falling on the loose ball.

That turnover led to a run of 22 straight points for the Eagles, who blew the game open and cruised to their fifth straight victory.

Warwick also defeated a team it had beaten earlier this season, but the Warriors had a much more difficult time subduing perennial District 3 powerhouse Manheim Central the second time around. Tanner Haines booted a 17-yard field goal as time expired to lift Warwick to a 31-28 triumph over the Barons. It was just the third playoff victory in program history for the Warriors.

Warwick beat Central 37-7 in Week 3 of the regular season, but needed a late rally to win the rematch. Adam Martin blocked a Baron punt with 1:55 to play to set up the Warriors' game-winning drive.

Those numbers are reflected in the players to watch for both teams.

The host Colts punched their tickets to the semifinals with a 41-13 rout of New Oxford, riding a spectacular effort from running back Jaheim Morris, who raced for 303 yards and three touchdowns while racking up 40 carries. Morris also hauled in a 66-yard TD pass from quarterback Gannon McMeans as Cedar Cliff scored on its first three possessions to quickly take control.

The Colts racked up 512 yards of total offense, while the defense held New Oxford to 146 yards.

Cedar Cliff has won eight straight games since falling 43-13 to Cocalico and 41-7 to Harrisburg in back-to-back weeks in September. The Colts won the Mid-Penn Keystone Division championship in the regular season. They are seeking their fourth district championship. Cedar Cliff's last appearance in a title game was in 1996, when the Colts defeated Wilson 38-13 in the Class 4A final.

Exeter fought its way to the semifinals with a 16-14 upset of Shippensburg, the No. 3 seed. It was the first loss of the season for the Greyhounds.

The 11th-seeded Eagles got a 161-yard rushing performance from running back Wender Polanco. Sean Henry added three field goals for Exeter, whose lone touchdown came on a one-yard plunge by Tyler Yocum.

Exeter's pass-heavy offense was held to just 70 yards through the air, but the Eagles managed 200 rushing yards while holding Shippensburg to just 128 yards of offense. The Greyhounds also committed four turnovers.

Polanco and Jeremiah Nixon split the bulk of the rushing duties for Exeter, combining for 1,198 yards and eight touchdowns on the ground. But Nixon was limited by an injury against Shipp, and managed just five yards on one carry.

Quarterback Gavin McClusker has completed 106 of 197 passes, for 1,896 yards and 24 touchdowns. Those totals are all tops in Berks County.

Exeter has won seven of its last eight games. The Eagles are 4-10 in their district playoff history and are making just their second appearance in the semifinals.