OTHER GAMES TO WATCH Bishop McDevitt (6-3) at Susquehanna Township (7-2) Barring something extremely unexpected, neither team will be able to catch Cedar Cliff ... 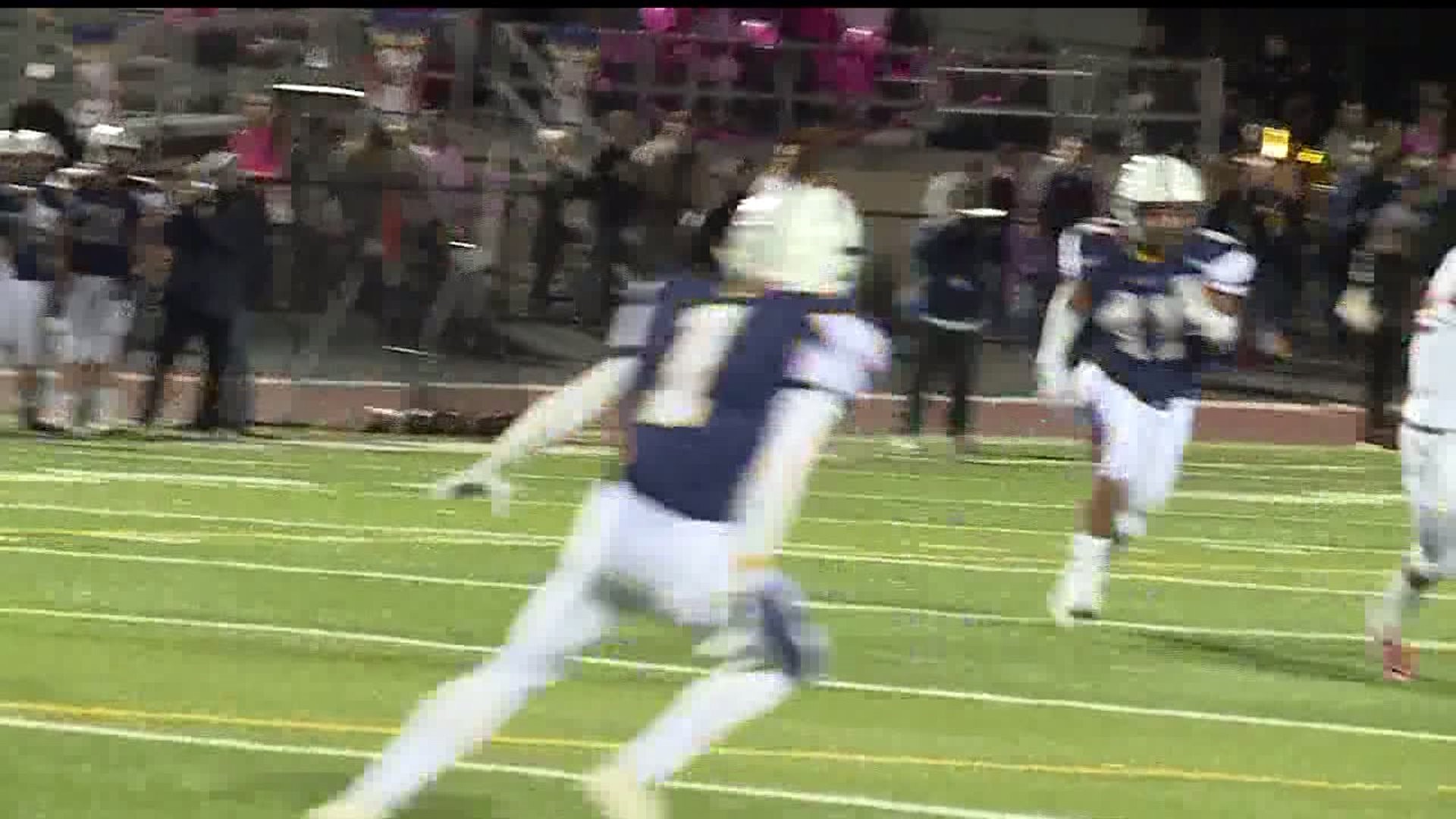 Barring something extremely unexpected, neither team will be able to catch Cedar Cliff for a share of the Mid-Penn Keystone Division crown. But both are vying for home-field advantage in the District 3 Class 4A playoffs, so the outcome of this one still has some meaning.

As it stands now, both teams have already earned first-round byes; McDevitt is ranked fifth, while Hanna is third. That's good enough to get them both free passes through the first round, and even Friday's loser will probably be OK in that regard. But McDevitt needs to move up one more slot in the rankings to earn home-field advantage in the quarterfinal round, so the Crusaders have a little more riding on the outcome.

Hanna's seven-game winning streak -- and, most likely, its best hope at winning a share of the Keystone title -- came to an end with last week's 21-14 loss to Cedar Cliff in the FOX43 High School Football Frenzy Game of the Week. The outcome wasn't decided until the game's final minute, when Cedar Cliff intercepted a pass from quarterback Rahsaan Carlton in the end zone to turn the Indians away. Carlton finished with 210 yards on 11-of-19 passing, including a 38-yard TD strike to Steven Graves. Jacob Seigle led the Indian ground game with 76 yards on 16 carries, and his 28-yard TD run in the third quarter accounted for Hanna's other touchdown.

McDevitt was 2-3 at the season's midpoint, but the Crusaders have gotten hot in the season's second half and are riding a four-game winning streak. They stomped Mechanicsburg 42-7 in their last outing, taking advantage of two defensive and two special teams touchdowns in the rout.

The Rollers can force a tie with the Spartans for the Mid-Penn Capital Division championship with a win on Friday, and both teams are hoping to head into Districts with some momentum, so it's safe to say there's a lot riding on the outcome of this one.

The Spartans are ranked No. 4 in the 10-team Class 4A playoff field. They have all but assured themselves of a first-round bye, but would love to maintain their current spot, which comes with home-field advantage in the quarterfinals.

Steel-High has won four straight since its 49-21 loss to Middletown back on Sept. 20. The Rollers knocked off Boiling Springs 22-12 last week. Quarterback Nyles Jones threw for a pair of touchdowns in the victory. He's one of the Rollers' players to watch, along with all-around threat Mehki Flowers and RB Odell Greene, who also had a touchdown against Boiling Springs.

The Rollers are ranked second in the District 3 Class 2A power rankings, trailing only Upper Dauphin. Steel-High is pretty much locked into the second spot, and will likely host Delone Catholic in the semifinals of the four-team field on the first weekend in November.

Both teams' L-L League Section 2 title hopes were effectively dashed with losses to Manheim Central earlier this season, but now they're looking ahead to Districts.

The host Eagles are battling to hang on to their No. 2 position in the Class 5A rankings -- an important spot, since only the top two teams in the 14-team field earn a bye through the first round. L-S is currently No. 6 in the Class 4A field, where the top 10 teams get in. The Pioneers need to hold on to that spot if they want a bye through the first round in their bracket.

Cocalico's offense revolves around senior quarterback Noah Palm, who leads the team in rushing (112-1,019, 20 TDs) and has completed 38 of 59 passes for 821 yards and eight scores, with just one interception. Palm is also one of the anchors in the Eagle secondary.

The YAIAA Division I title is out of reach for both teams, but berths in the District 3 Class 5A playoffs are assured. It's all about positioning at this point, but that's not the only reason both teams will be fighting hard for victory Friday night.

New Oxford is currently the No. 8 team in the Class 5A field, while Northeastern checks in at No. 7. Neither team is likely to jump up enough in the rankings to earn a free pass through the first round, but if they were to maintain their current positions, both would be at home in the first round. Friday's victor would clinch a first-round home game, while the loser would be sweating it out while the district's math whizzes figure out the final power rankings to seed the bracket.

Northeastern still has one of the York-Adams league's top offenses, but the Wildcats are definitely slumping. They've dropped three of their last four games, including back-to-back losses to Central York (57-7) and York High (32-7) that effectively sank their Division I title hopes. RB Manny Capo has been shut down in Northeastern's last two games, but he still leads the league in rushing, with 1,435 yards and 15 touchdowns on 206 carries. QB Zech Sanderson has completed 89 of 194 passes for 1,305 yards and 15 scores. Sanderson's top target, wideout Jordan Lagana, ranks second in the league with 39 catches for 686 yards and 10 TDs.

New Oxford suffered through a three-game skid earlier in the season, but the Colonials have reeled off four straight wins since. Quarterback Brayden Long is the league's top passer, with 1,929 yards and 22 touchdowns. He's completed 125 of 197 attempts, and has been picked off six times. Long's top targets are Abdul Janneh (league-high 810 yards and 10 TDs on 39 catches) and Connor Herring (32-318).