The change will affect all winter sports. But the new order also comes mere days before several fall sports championships happening this weekend. 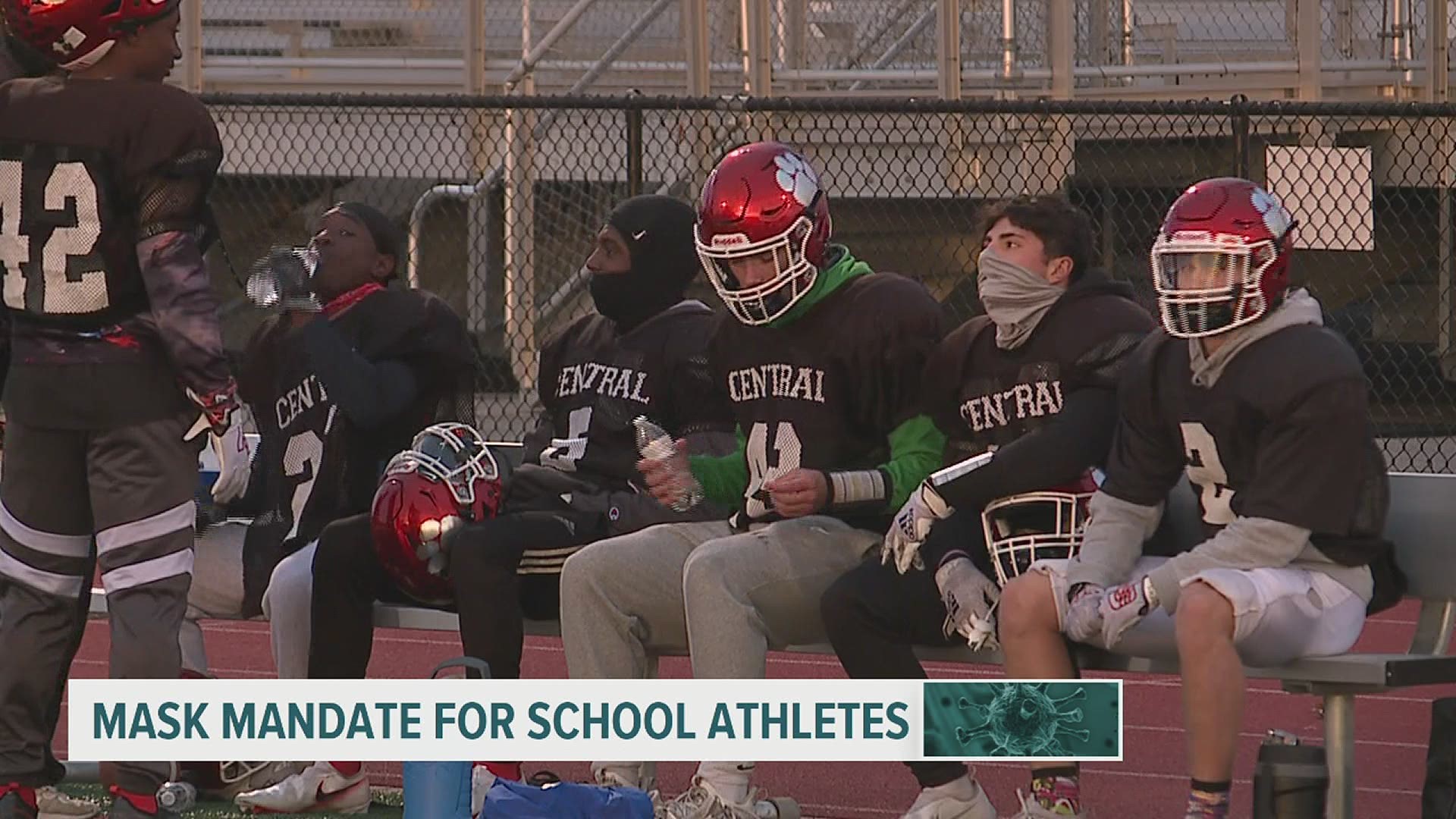 YORK, Pa. — High school sports teams are grappling with how to follow new mask guidelines from the Pennsylvania Department of Health that require athletes wear masks at nearly all times, including during competition.

“It’s fair on the sidelines that everybody has them on. It’s fair that the coaches have them on. We haven’t taken them off on the field all year long. It kind of stinks for these kids,” said John Manion, Lampeter-Strasburg head football coach. “They’re playing pretty high level competition to have the rules changed on them in the end. And it’s physically impossible for them to do what we’re being asked to do.”

The new mask mandate, which went into effect Nov. 18, says masks must be worn at all times for indoor sports, and when distancing isn’t possible between people of different households for outdoor sports.

Previously athletes had to wear masks when on the sidelines or not playing, but could remove masks to play.

“A couple days before the championships, the timing is not very good. However we’re going to work with our schools and do our best to comply because we’re talking about complying with an order,” said Robert Lombardi, executive director of the Pennsylvania Interscholastic Athletic Association (PIAA).

With two days notice before the game, Central York’s team began practicing with masks on Thursday.

“You're dealing with teenagers. And all of a sudden you're telling these guys, guys you've been masked up since March but now you may have to mask up,” said Gerry Yonchiuk, Central York head football coach. “Like yesterday [I said] I didn't know guys if you were going to have to mask up while you're playing.”

The World Health Organization (WHO) says people should not wear masks while exercising, as sweat can get the mask wet and make it hard to breath. A damp mask can also promote the growth of microorganisms.

“Obviously breathing can be a difficulty with a lot of these guys, especially with the colder air,” said senior left guard Ethan Cramer, who has been wearing a gaiter while playing all season.

Due to the safety concerns of heavy exercise while wearing a mask, many team leaders feel athletes on the field fall under a medical exception to the order.

Section 3-B of the order states, “If wearing a face covering would either cause a medical condition, or exacerbate an existing one, including respiratory issues that impede breathing, a mental health condition or a disability.”

Central York is currently planning to have team members wear a gaiter around their necks while playing, Yonchiuk said. However, they are required to pull the gaiters up as soon as they remove their helmets.

“Will we be ready by the game? I hope so,” said Central York defensive coordinator Mike Cesarano. “I think our kids have been pretty resilient.”

PIAA officials said they were awaiting further clarification on the mask mandate from the Department of Health.