Frenzy Five: Here are five games to watch on Oct. 16

Warwick visits Solanco in a battle for first place in Section 2 of the L-L League in the FOX43 Frenzy Game of the Week, plus other juicy matchups 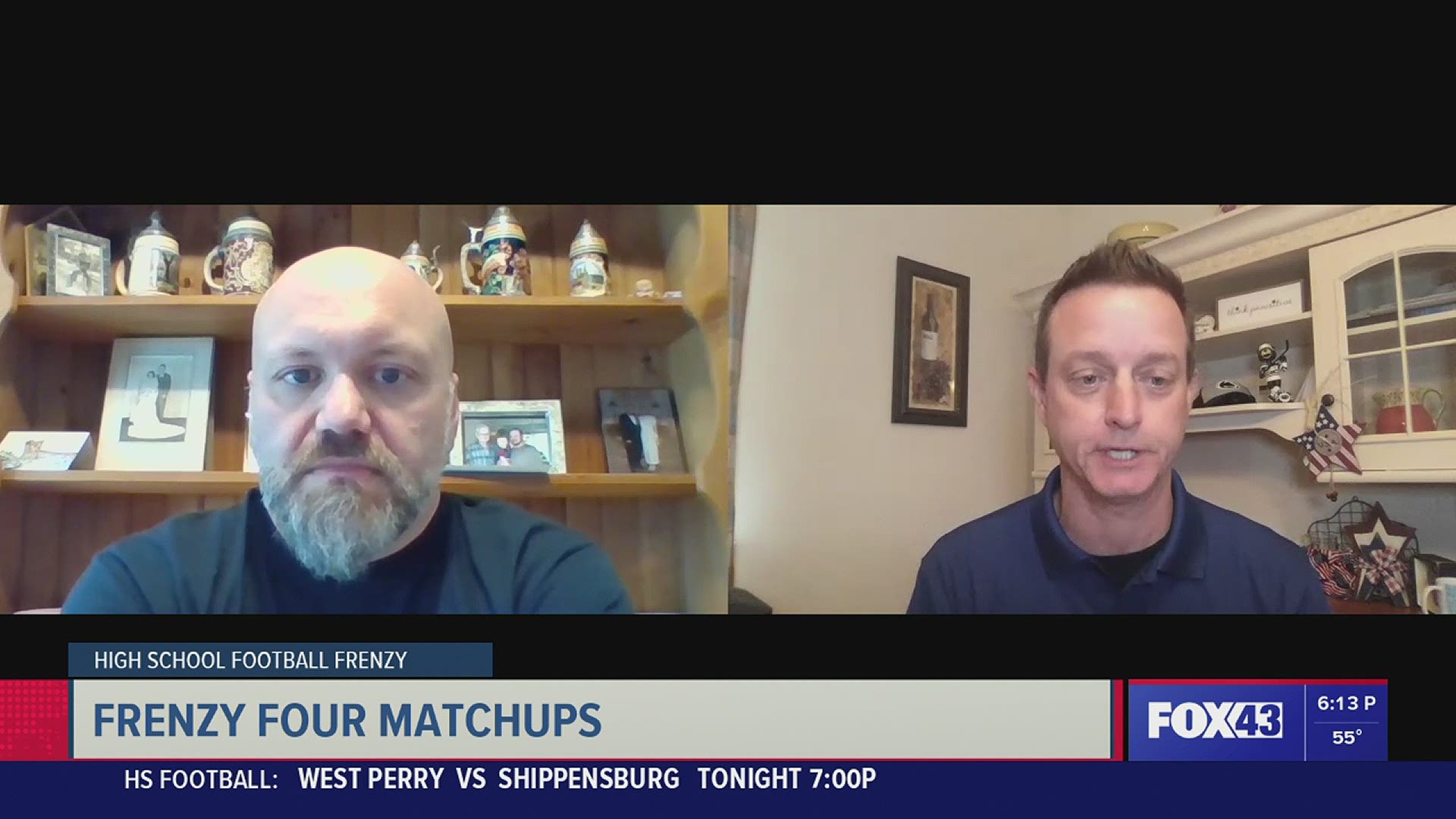 Hard to believe, but we're already at the midpoint of this abbreviated high school football season. In just two weeks, we'll be looking at District 3 playoff brackets and trying to fill them in.

That means that every game's a big one from here on out for Central Pennsylvania's contenders.

Here are five games to watch this week, starting with the FOX43 High School Football Frenzy Game of the Week.

First place in Section 2 of the Lancaster-Lebanon League will be on the line Friday when the red-hot Warriors visit Quarryville to take on Solanco. It’s the first time these teams have seen one another since 2003.

FOX43 will preview all the action live from Quarryville at 6 p.m. with the High School Football Frenzy show.

To upend the unbeaten Warriors, Solanco will have to find a way to slow down Warwick QB Joey McCracken, who has 520 passing yards and three touchdowns through four games. Colton Miller has rushed for 339 yards and a league-leading 13 touchdowns and Caleb Smitz has a league-high 25 catches for 365 yards and two scores, so Warwick is far from a one-man show.

The Golden Mules have won three in a row since falling 47-15 to Section 3 leader Lampeter-Strasburg in its season opener. Those three wins -- over Elizabethtown, Cocalico, and Manheim Central -- have come by a combined total of 16 points, so Solanco is used to playing in nail-biters.

The Mules have the league’s third-ranked rushing attack, with three guys carrying for at least 250 yards -- QB Mason St. Clair, Ronnie Fulton, and Zachary Turpin. That trio has a combined 16 touchdowns.

Solanco will need that ground game to be effective if it wants to chew up the clock and keep that potent Warwick offense off the field.

It's always a fun time when these two L-L League rivals square off, no matter what the sport. This year’s game will have even more juice, since Hempfield is off to its best start since it opened the 2015 season with five straight wins.

The Black Knights have won three in a row since falling 41-34 to Exeter Township in their season opener, powered in part by the combo of QB Cameron Harbaugh (546 passing yards, 2 TDs) RB Tanner Hess (479 yards, 8 TDs) and WR Jadin Jiminez (20 catches, 229 yards).

Township has won two in a row since starting the season with losses to St. Joseph’s Prep and Wilson, beating Cedar Crest 49-14 and Penn Manor 14-6. The Blue Streaks’ player to watch is QB Evan Clark, who has thrown for 621 yards and 8 TDs and is the team’s second-leading rusher with 180 yards and two scores.

Hanna has been idle since Sept. 25, thanks to COVID-19. The Indians lost to Greencastle-Antrim 20-13 in their only game.

The Rams are rolling behind RB Timmy Smith and QB Max Mosey; none of their first three opponents have been able to stay within 20 points of them.

Mosey has completed 30 of 49 passes for 552 yards and nine TDs in his first three games.

Altoona has sandwiched wins over Cumberland Valley and Chambersburg around a 28-12 loss to Hollidaysburg so far.

Just wanted to give a shout-out to the Bulldogs, who are off to a 2-0 start in the YAIAA after struggling to a one-win season last year.

West York is historically one of York County’s most successful programs, but the Bulldogs have fallen on hard times in the last five years or so.

This year, they’ve won a couple of shootouts, beating Susquehannock 42-35 and Eastern York 40-39.

We’ll see if West York is for real over the next few weeks. After tonight's test with K-D, the Bulldogs face defending Division II champ York Suburban and undefeated New Oxford in the next two weeks.

Kennard-Dale ranks fourth in the YAIAA in rushing offense, averaging 236 yards per game. Darius Bailey (45-344) is the team's top rusher.