Hersheypark Stadium –  Four games, four thrillers in the 2019 edition of the District III soccer championships on Saturday. Start with 4A boys and a clash... 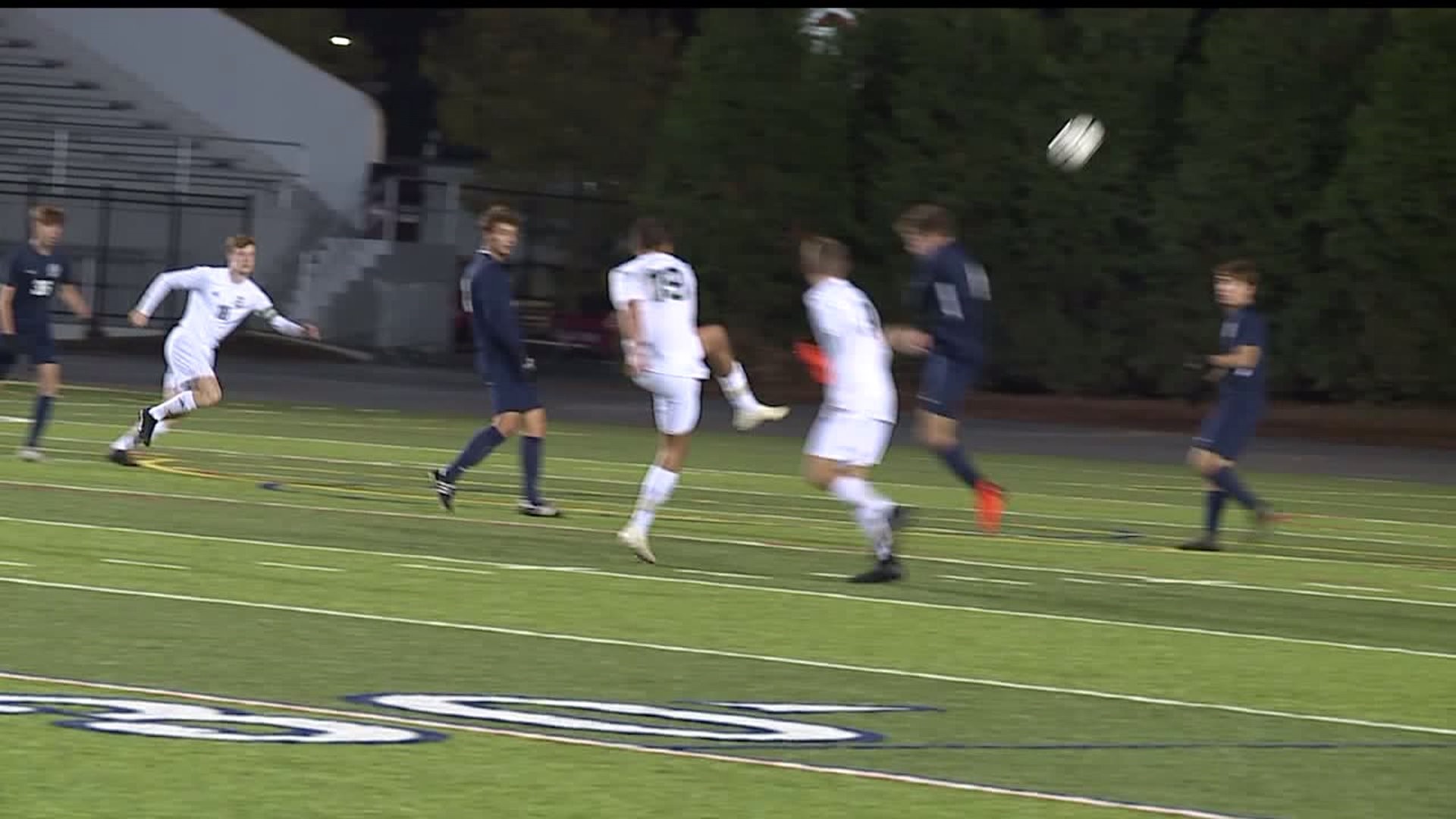 Start with 4A boys and a clash of titans. Nationally ranked and undefeated (23-0) Dallastown faced off against (19-1-1) Central Dauphin. The Rams have not lost since the second match of the year.  It was a back and forth game in the first half until a penalty was called in the box against C.D.

Up to the dot stepped Joe Hanuska for the Wildcats and after a few moments of deliberation, he delivered his right foot to the ball which lined towards the lower-left corner.  That is where C.D. keeper Eric Axtman was diving and he was able to deflect it out before the Rams cleared to keep this one scoreless. That proved to be a huge moment in this game.

After a blank card in the first half, the Rams were able to strike first as Luke Johnson used his left foot to float one perfectly under the cross-bar from 25 yards out to give C.D. a goal advantage.

Dallastown upped the pressure but time and time again Axtman stood tall securing the gold for Central Dauphin. Afterward, Axtman was all smiles.

"We practice pk's a lot in practice and I know I can save some. I knew him because he plays on my brother's club team so I was confident in my ability.  Now we are  rolling into states with this district win and we haven't lost since the second game of the season and we are just going to keep rolling."

In the 2A boys' title game, Lancaster Mennonite was up against the top-seed, Fleetwood. The Blazers lit up the bulbs on the board first after a service into the box. Off a header, the ball found the foot of Cameron Hoober, and he did not take long to deposit it into the back of the net, as Mennonite jumped out, 1-0.

But Fleetwood showed why they're the top-seed, answering right back minutes later.

That didn't deter Mennonite. Mesa Dula just ripped one right through the hands of the Tigers' net-minder. Blazers were up 2-1 at the break.

While they (Mennonite) went with a defensive approach in the second half, the Tigers were on the attack. Fleetwood scored the next two, the final one coming in overtime to secure the 3-2 victory.

On the girls' side the drama was even more intense. In 2A it was Boiling Springs and ELCO. You know you have a great soccer match when after 110 minutes you need penalty kicks to crown a champion.

Bekah Becker had a hand in this one for the Bubblers as she comes up with the big save.

But after a pair of Boiling Springs shots that rattled the woodwork, the pressure came down to Paige Thomas. No worries for Paige, she stepped up and delivered a championship for ELCO.

Second straight year the Raiders are your District III, class 2A champs, after winning it in shootout fashion, 4-3.

Finally, in 4A girls, Hempfield and Cumberland Valley treated the crowd to a score fest in the first half.

After a few Black Knight attacks, the Eagles were able to counter with a perfect ball for Gina Lukoskie, who used her left foot to guide one as Cumberland valley jumped out to the lead 1-0.

Hempfield though wasted no time in the answering back. On a corner, Jess Weinoldt cut perfectly to the back post and delivered a thigh to the ball that sent it home for the equalizer.

Minutes later it was Gabi Hollinger that had the lead on her mind and made a nifty cutback and then a well place strike floated one just high enough for the score to put Hempfield up 2-1.

Cumberland Valley would tie this game up at 2-2 before the half and after a scoreless second that meant another overtime.  Two minutes into the first extra session, after a scramble in front, the ball popped out to Megan Grube who didn't waste a second delivering the game-winning kick into the top right corner to give Hempfield the 3-2 victory and the district championship.