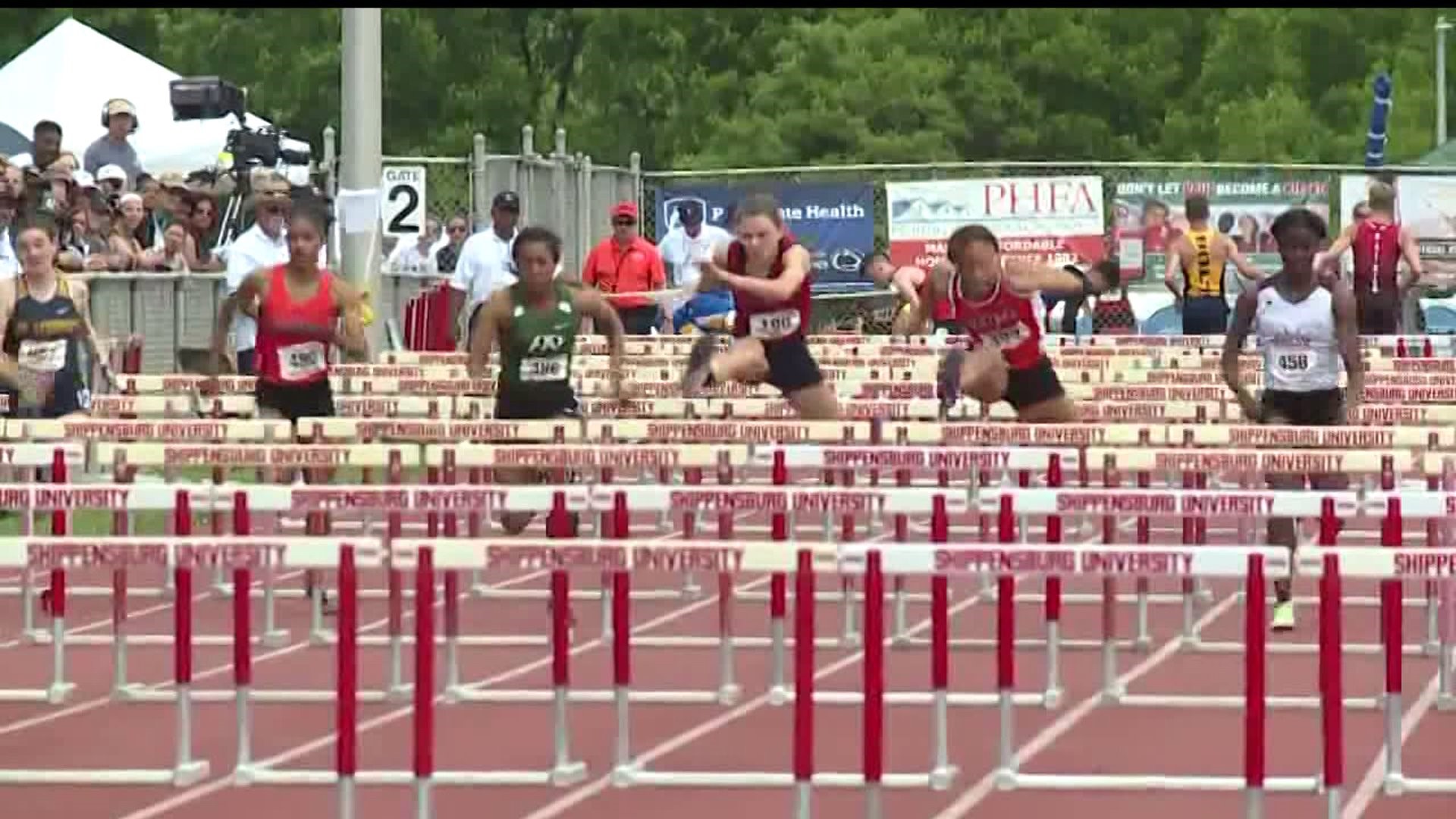 SHIPPENSBURG TWP., Cumberland County -- Hot and sunny day for the final day of the PIAA State Track and Field Championships. District III certainly represented well to close out the 2019 season.

In the girls 3A, 100-meter hurdles, Jane Livingston of Conestoga Valley comes in as the underdog. This race is so close, both ladies finish in 13.77. Officials have to go to the thousandth of a second to name Livingston the champion. She also won the 3A girls 300-meter hurdles in 41.96 seconds. Taylor Jede of Cumberland Valley finishes 5th.

“It’s the best way to end a senior season and this season has been incredible. I’m really bless and very excited," said Jane Livingston, Conestoga Valley.

“I was really trying to break the 14 barrier but I got a school record and a PR (personal record). So, it was something to close out my year off with," said Emmanuel Niang, C.D. East.

3A girls 100-meter dash, second, third and fourth for the trio from Warwick of Lily Palacio-Lewis, Leah Graybill and Meghan Quinn. After a false start, Shawn Brown of C.D. East takes the 3A boys 100-meter dash in 10.89 seconds. Kamere Day and Donte Kent of Harrisburg place 3rd and 7th and Tyeshawn Worrell of Chambersburg places 4th.

Showdown in the 1,600. Northern's Marlee Starliper and Greencastle-Antrim’s Tayrn Parks. Parks leads every lap and it doesn’t get mush closer than this. Parks edges out Starliper by a half a second, 4:37.07 seconds and a new PIAA record. Parks and Starliper now have the number one and two fastest times in the nation.

“I would not have been able to run that without her. She’s such a great competitor. I’m just really happy how today went," said Tayrn Parks, Greencastle-Antrim.

3A boys, Manheim Township’s Evan Dorenkamp takes it wide to pass, never looks back and wins in 4:08.15. Dorenkamp misses the PIAA record by less than a second.

“Hold on. You have a stronger kick than these guys. We went out fast and I was a bit worried because I felt it on the third lap. I was able to hold on by a hair and out kick," said Evan Dorenkamp, Manheim Township.

Onto the quarter mile, from out in lane six, Donegal's Taylor Nissly wins the bronze in the girls 3A 400 meter. 3A boys 400 meter, C.D. East’s Stephon Brown finishes second and Cumberland Valley’s Jay Jaysing fourth.

“I was a little nervous, as everyone is. I was confident. I was reassured. I know what I needed to do," said Ezra Mellinger, Lampeter-Strasburg

Warwick girls finish fourth in the 4 by 400 and take the 3A team title with 44 points.

Onto the field, Warwick's Nate Good is good over 6 feet, 7 inches for fourth in the boys 3A high jump.

Kolt Byers of Bermudian Springs, Brody Myers of Camp Hill and Neil Waldhausen of Annville-Cleona clear 14-feet in the 2A boys pole vault on different attempts to place third, fourth and sixth.

Central Dauphin’s Gabriella Recce with a jump of 18 feet, 11 1/2 to place third in the 3A girls long jump.

Saving the best for last, unified track and field athletes from Red Lion High School competed in the 100, 4 by 100, 400 and 800 to place third overall.

For the second straight day, Penn State bound Mallory Kauffman has won gold. This time, the Greenwood senior claimed the top spot in 2A shot put.

Northern's Chris Barrett wins gold in the 3A boys javelin with a throw of 203-1.