Hersheypark Stadium would annually host exhibition games between the Eagles and Baltimore Colts. 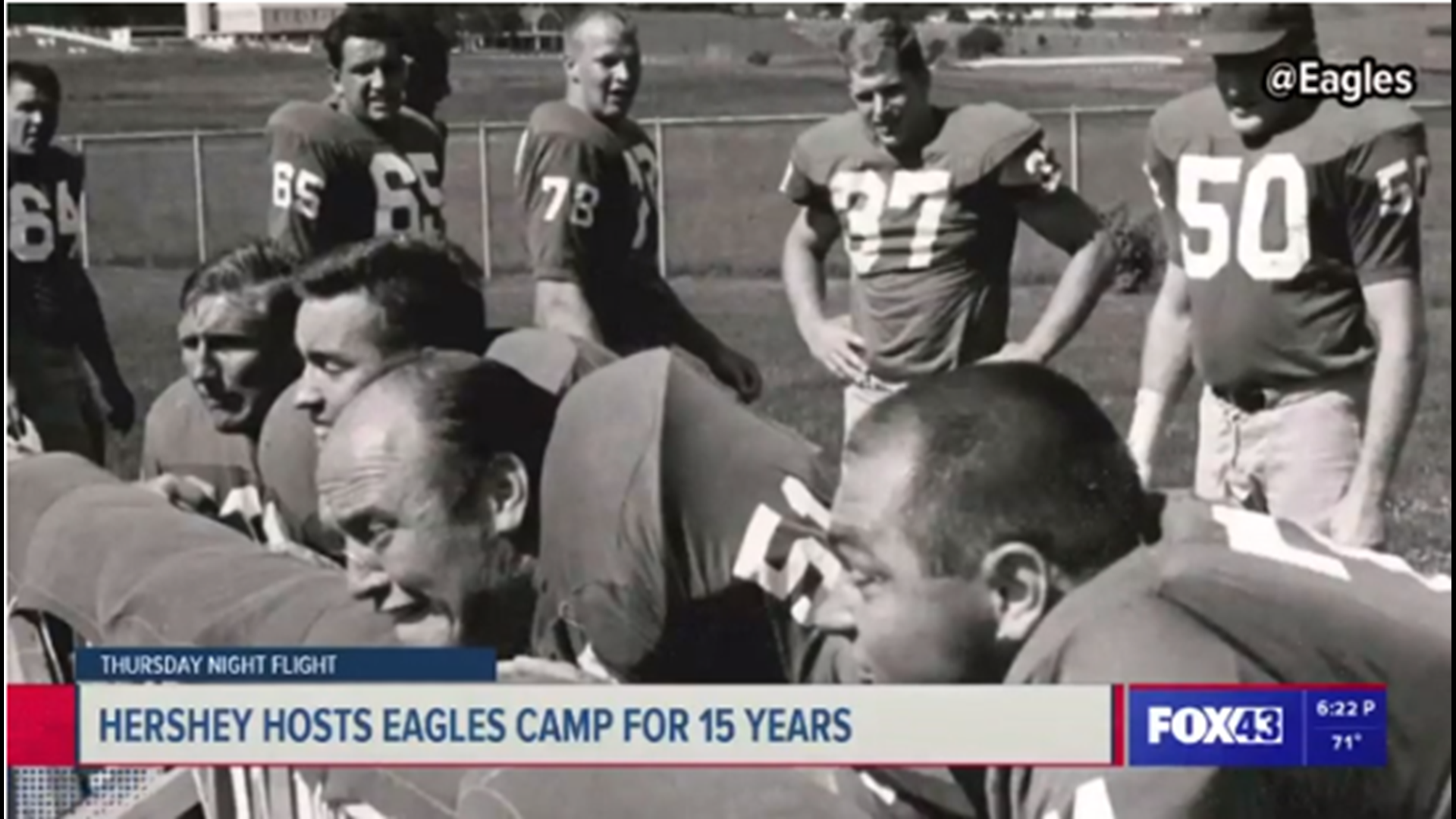 HERSHEY, Pa. — After taking their training camp to New York and Minnesota for a five year period, the Philadelphia Eagles returned to the state of Pennsylvania, calling Hershey their summer home from 1951-1967, with the exception of a summer in New Jersey in 1964.

Unlike the training camps today, the fans access to the players seemed endless.

"Every morning they would walk to the stadium and kids would ask if they could carry their helmets.  They would always sign autographs and the practices back then were open so anybody could go and watch," said Amy Zeigler, the Senior Director of the Hershey Story Museum.

The camp would even lead to some once in lifetime opportunities for some of the young fans from the region.

"They had a water boy competition, where kids between eight and 12 could practice throwing and catching balls and whoever did the best job got to sit with the team so it was a really big deal," recalled Zeigler.  "I'm sure you've heard of Ray Didinger, the sportscaster for the Eagles.  He and his family used to travel to Hershey every summer just to see Eagles training camp.  He actually got to carry Tommy McDonald's helmet once when he was walking between the Community Building and the stadium."

It wasn't just at Hersheypark Stadium where people could connect with the players and coaches.  The team stayed on the third and fourth floors of the Community Building and they were fixtures around town during the summer.

"The Community Building had rooms where you could stay in, like a hotel, but it also had a gymnasium, a library, game rooms, a bowling alley, a theater, so it had a lot going on," added Zeigler.  "It was really the epicenter of Hershey and so the fact that the players would stay there and be so open about the community, seeing them and interacting with them was really a cool a thing."

Hersheypark Stadium was home for the camp practices, but as the regular season neared, the town would get to witness exhibition games involving the Birds and a few other NFL teams.

"Training camp was three weeks long and at the end they always had a preseason game.  Usually they played the Baltimore Colts.  A couple of times they would play the Colts and later on have another preseason game at the stadium.  The New York Giants were here, among some other teams.  It was a really fun time to be living in Hershey," said Zeigler

For as excited as fans were to see their team on the field, the lasting memories for so many came off of the grid-iron.

"We have many oral histories.  The players were extremely kind and gracious with people in town.  They often ate at the Community Building restaurant with the public.  They played pool and handball with the local kids in the community.  It was a very big deal," added Zeigler.

In 1968, the Eagles moved their training camp to Albright College in Reading, Pennsylvania, before having stints at Widener University, West Chester University, Lehigh University, and the NovaCare Complex in Philadelphia, where they've held their camp since 2013.