Matt Moulson, Patrick Wellar and Chris Patrick detail how they got started in hockey 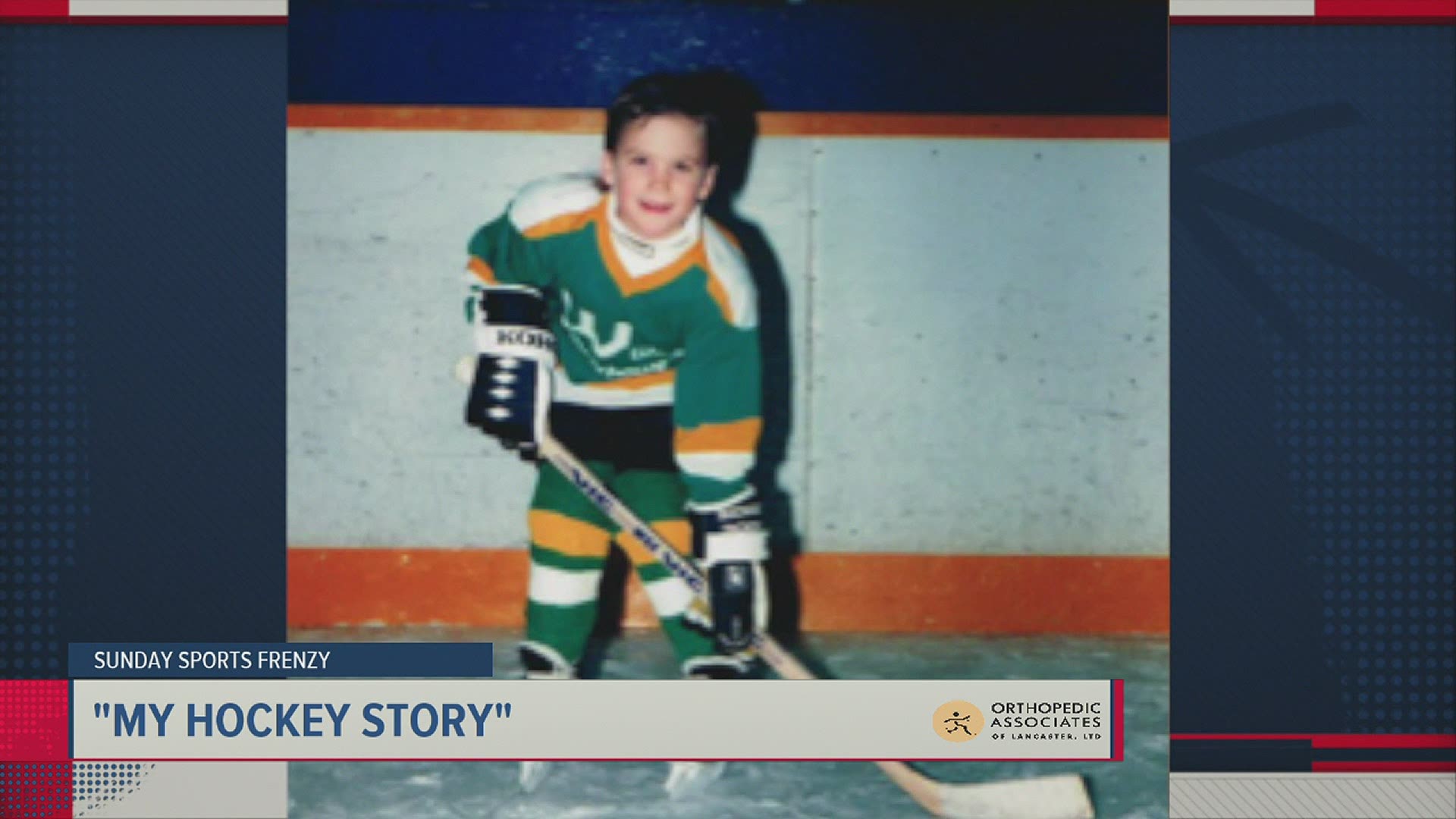 HERSHEY, Pa. — The following is the script for the attached story that aired in the FOX43 Sunday Sports Frenzy and during an intermission of FOX43's broadcast of the Hershey Bears-Binghamton Devils game.

April 8th,1995.  The Flyers win the game 3-1 over the Capitals in Landover, Maryland but I win the girl. That’s the night I proposed to my wife as she sat three rows from the glass at the Capital Centre.

She said yes and we were married a little over a year later. How do I remember our anniversary?  It’s on a hockey puck, my wedding gift to my groomsman on the big day.  I've been passionate about the game for almost half a century.  If you let this game get in your blood, it will never leave and everyone infected has a hockey story.

(Picture) Isn’t he adorable?  Yes, I’m talking about my dog Ben.  As for me, I’m rocking my first Capitals t-shirt in the mid-1970’s. Check the history books, the Caps were awful then, losing 37 in a row in their first season.  (Second picture) Here’s me again sitting next to someone on the Baltimore Blades. Anyone remember the Baltimore Blades?  Me either ..

I was on skates soon after but no team in high school meant a transition to other sports, temporarily. After college, back to the ice to center a line with two of my best friends, Dan on the right, Jeff on the left.

One year later, line mates that share the same blood. My older brothers Ted and Tom. I still remember Tommy and I jumping the guy that hit Ted with a cheap shot, the rest of the team called us the Hanson Brothers.  That’s a few decades ago. Now I’m fortunate enough to spend a little time telling other peoples hockey stories. For example, the Bears captain Matt Moulson.

“My Dad took me out when I was three years old and I cried the entire time and he said he would never bring me out again," laughed Matt.  "Then I guess he waited a year and the steam settled from me crying the whole time so he took me back out and I kind of fell in love with it ever since then.”

(Picture of Matt) The piano never had a chance. Matt chose to make sweet music on the ice instead, always with a stick in his hand.  Moulson played in college for the Big Red of Cornell and realized his NHL dream when he scored 30 or more goals three consecutive years for the Islanders.

"I kind of lived and died with the Toronto Maple Leafs and their captain Wendel Clark. I just always loved it, loved playing it, working hard to do something that you love seemed like a bonus."

Matt’s hockey story evolved to include his kids who let him know he would be the Hershey Bears Captain.

Just one week ago, he added another souvenir to his collection when he tallies his 700th professional point.

Patrick Wellar is the Bears Assistant Coach and a Calder Cup Champion player with the Bears in 2010. If he would have had his way initially as a kid, he would have never laced up the skates.

“My brother is a year older than me. We started out, I was 6 and he was 7, it’s  funny but my Dad wanted my brother Chris and I to start, and I actually didn’t want to play," explained Patrick.  "Looking back that is kind of funny because to your point it getting in your blood, it took one season and I’ve been hooked ever since."

Wellar’s Dad was a police officer and the family moved around a lot, allowing Patrick to play in a lot of good hockey towns.  He says the game has taken him all around the world before he landed back in Chocolatetown as a coach.

“I owe it a lot and hockey has certainly given me a thrill ride that I hope it continues to keep going because I know how lucky I am and I’m extremely grateful to my parents for giving me the chance to do it.”

The Capitals Director of Player Personnel is Chris Patrick and I’m not sure I have enough time to tell you the hockey history of the Patrick family. Let’s concentrate on Chris and just say he became the 7th member of his family to have his name etched into the Stanley Cup when the Caps won it all in 2018.

“For me, it’s just really all I’ve ever been around," admitted Chris. "You go to family reunions, that’s really all people talk about I would just sit there and listen to my grandfather’s stories, eyes wide open and just loving it."

How could he not get hooked into the family business? Chris played in college with Princeton. After his playing days, he took a job in finance.  Eventually, he took former Caps GM George McPhee up on an offer to join the organization.

"For me, this is really the only thing I could see myself doing, not everybody is fortunate to get a job in an industry that they love. For me, I’ve been lucky to get that."