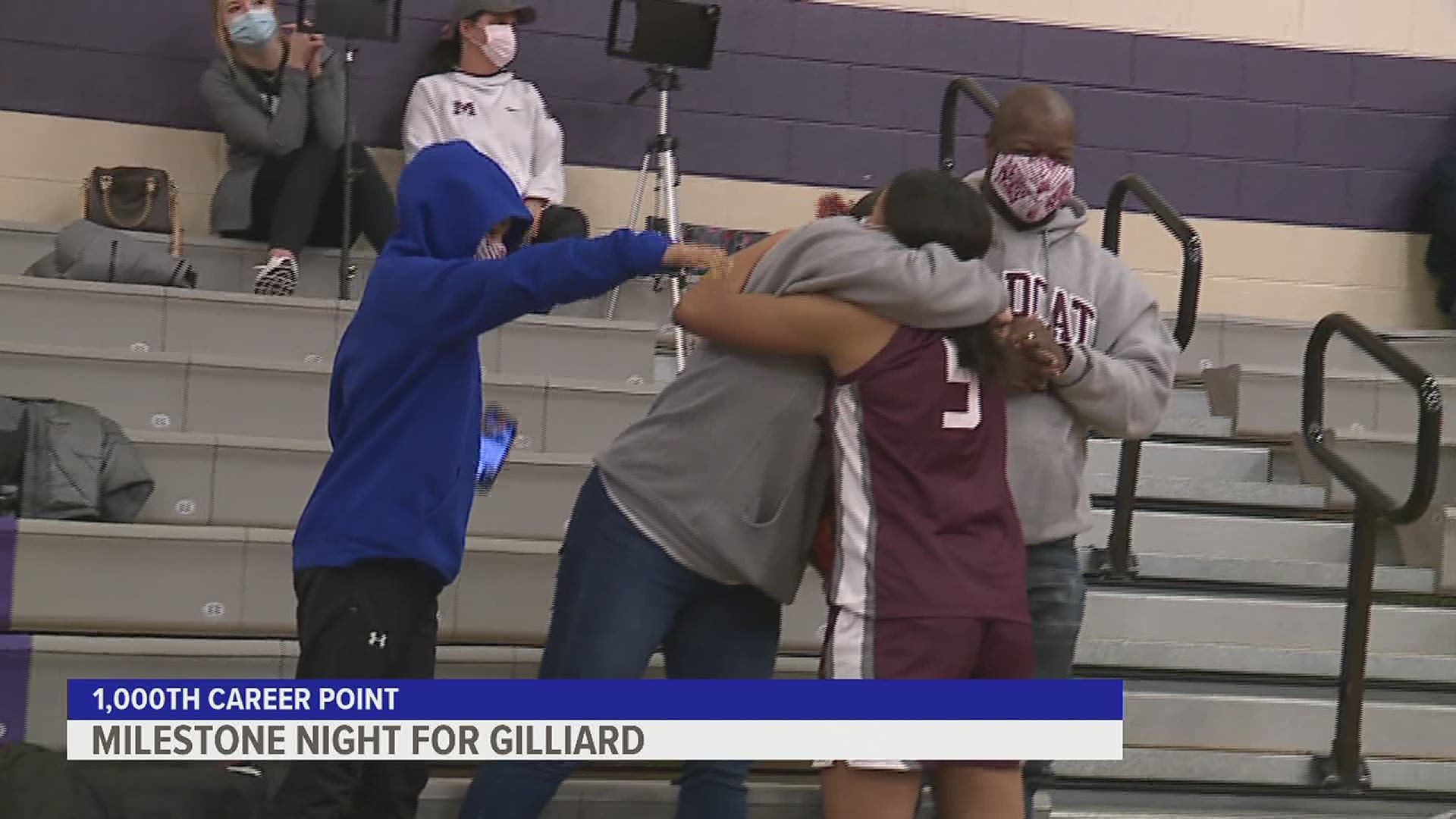 DILLSBURG, Pa. — The second time was twice as nice for Talia Gilliard. In her second game in 24-hours, the Mechanicsburg senior reached a career milestone and turned her attention towards another.

After Friday nights season opening game Gilliard entered the contest at Northern York with 999 career points. A nice number to maybe to play in Las Vegas.  A not so nice number to have looming over your head with uncertainty everywhere this year due to COVID-19.

With mom, dad, and her younger brother in the stands. The seconds on the warmup clock seemed to drag on much like this career milestone that was delayed after last year's post season was called.

Finally as the game the got started, Talia took the court with confidence.  The only question was how would the bucket occur.

The first attempt was a step back corner three that found the iron.  A tough runner in the lane followed that wouldn't drop.  Talia's third field goal try drew a whistle and sent her to the charity stripe. But no milestone is a free-bee.

With her family clutching cellphones and a camera in their hands to capture the moment, Talia took a deep breath and took the second of the foul shots. Her eyes pierced throw the gym lights, frozen as the rotation on the Spalding ball looked pure and it was, touching nothing but bottom of net. A brief moment of silence took place before he buzzer sounded. Finally, career point 1,000 on January 9th, 2021.

Congratulations to Talia Gilliard on getting her 1,000 point! Class act by @NHSpbears for letting her parents in to witness it! Thank you

Talia's arms went into the air and after a few hugs from her teammates and coach, as a "congratulations" sign was displayed on the bench, she was handed the ball and off to the stands she went for hugs with her family.  Seeing your daughter succeed is always a great moment.

"Of course for mom is was emotional," said Crista Jackson laughing. "We are just very excited and elated for her that she was able to accomplish this goal this year."  Jackson added that the waiting and not knowing (if their would be a season) was the hardest part.

"She was really looking forward to getting it done last year but I think she is just happy that she had the opportunity to get it done this year."

We don't know if Talia is a Tom Petty fan but now she knows all about waiting to achieve your goals, though she has other plans for something bigger on the horizon.

"It is a relief," said Gilliard. "I think it is a step closer to the end goal that I want to achieve, it is a step forward."

That goal is 1,255 points which would make her the schools all time leading scorer.

As for the game Mechanicsburg downed Northern 48-27.