Fisch carries on the rich tradition of Bears broadcasters | Spotlight

Players and coaches aren't the only thing that Hershey has sent on to the NHL as there's a long list of broadcasters who have called Chocolatetown home. 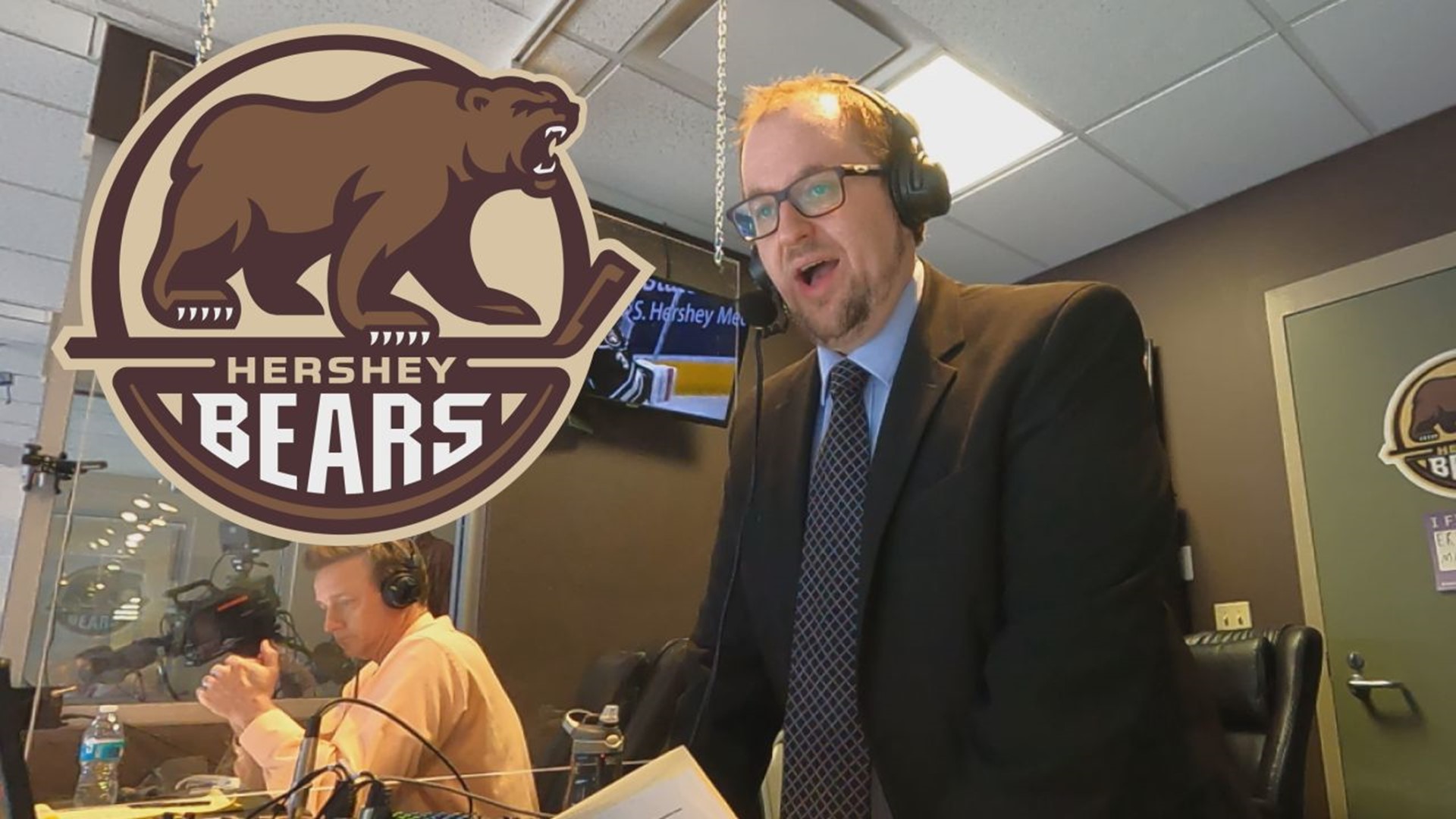 HERSHEY, Pa. — Throughout the history of the Hershey Bears, Chocolatetown has had some stellar players taking aim and playing between the pipes, but off the ice, the tradition might be just as rich for those using their golden pipes to make fans all ears, every game.

For as memorable as the visuals have been of the Calder Cup championships, there have been memorable voices attached to them all.

"Recent ones that come to mind, Dan Kamal and that 1989 championship.  He went on to broadcast in the National Hockey League for the Atlanta Thrashers," recalled current 'Voice of the Hershey Bears,' Zack Fisch.  "Dave Mishkin called the 1997 Calder Cup.  He's gone on to call a couple of Stanley Cups for the Tampa Bay Lightning.  Then, of course, John Walton.  Three championships here and I think he's the voice a lot of younger Bears fans, a lot of newer Bears fans, and long time Bears fans resonate with."

"You don't get to the NHL level without a lot of help along the way and for me, Hershey was that place," recalled Capitals play-by-play man and former Bears broadcaster John Walton.  I walked in in 2002 and I didn't know a soul.  By the time that I had left after three Calder Cup championships and the fans hold you to a count, the players, broadcasters, everybody, and that made me better."

For the voice who currently occupies the booth, high expectations are the only way to go.

"You don't want to go to a spot where you're the best of the best and nobody knows any better," said Fisch.  "I've got to come in and elevate my game every year and every broadcast because the gentleman before me were so good at what they did and I love that."

Even dating back to his time at St. Cloud State University, Fisch could be found by the ice with a microphone.  He eventually worked his way to the ECHL's South Carolina Sting Rays in 2015, where he turned some pretty important heads.

"The Bears had called me looking for a recommendation and I was really impressed with his work and I said, 'I think you should give him a shot,' and he's been terrific for them," said Walton.

In 2018, Fisch received his first taste of calling an NHL game.

"My family is all there. They don't really care necessarily to watch the game a ton. They wanted to see it. They'll have headphones in listening to me synced up, trying to catch the broadcast," said Fisch.

While he had months to prepare for that NHL broadcast, the same can't be said in 2021.  COVID precautions have led to some sudden call-ups, not only for the players but also the broadcasters.

"About 24 hours of notice that, 'Hey, you're coming to DC tomorrow and you're calling Caps and Bruins.'  And it was a shock.  I went to prep work right away and started learning as much as I could about the Boston Bruins. Luckily, I knew a lot about the Capitals but I was brushing up on them and getting everything ready to go," added Fisch.

The quality of the games and milestones called is as memorable for those in the booth, as those on the ice.

"He's got some great games to call, too. I mean, he had Nick Backstrom's 1,000th game, Zdeno Chara's last goal that he had was when Zack was on the mic.  I was a little jealous of that one, to be honest with you," said Walton with a smile.

And it's his voice that's already caught the ear of many, including his own.

"I was sitting there feeding my one-year-old son and I had the Capitals game on NBC.  It was a nationally televised game that day and I turned around and heard my voice and I went 'That was me,'" laughed Fisch.  "Immediately my phone started blowing up right away.  John Walton texted me, my folks texted me, and I had friends in the broadcast world all giving me a hard time, 'All look at the big-timer.'"

Fisch is looking forward to that marquee call of his own in Chocolatetown, but in the meantime, the feedback from those that came before him means the world.

"He's NHL caliber right now and certainly, I know no one wants to see him run off and may not want me to say that, but he does a tremendous job up there," said Walton.

"Before I did my first game, he sent me this big, long, nice email that I still have to this day about, 'You know what, you're going to get a taste of this and when you're driving back from Wilkes-Barre at the end of a three and three and you're dead tired, that's going to be your drive to continue to keep pushing.  That email really touched me and made me feel that this is what I was meant to do.  This is where I want to go.  I have someone on my side," said Fisch.