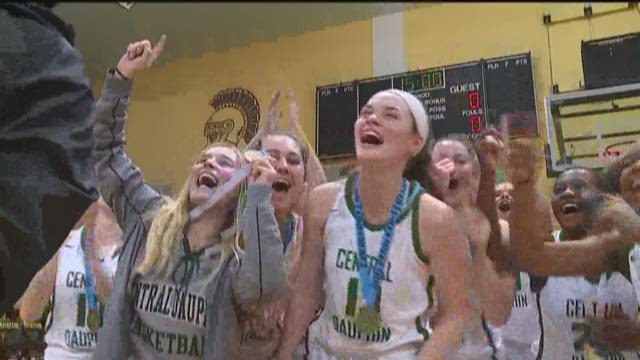 HERSHEY, Pa. — The Spartan Center at Milton Hershey was packed on Thursday night as the Mid-Penn crowned both the girls and boys champions on the basketball court.

In the girls match-up Trinity jumped out to an early lead versus Central Dauphin but the Lady Rams clawed their way back into the game. Even though Trinity had the lead at the break by two, the momentum seemed to be on the side of Central Dauphin.

The Lady Rams started the third quarter on a run, took the lead, and every time the Shamrocks got close, they found the answer whether it was on defense or a clutch basket as they grabbed the victory 55-42

When the CD boys took the floor, their opponent Bishop McDevitt was already on the court and the packed student sections for both schools made sure to raise the temperature.

The Rams used an inside out game to perfection in the first half jumping out to a 16-point lead at the break.

The second half featured more of the same, with an added flare on the defensive end with block after block on their way to a 66-53 win.

Check out the highlights in the link above.