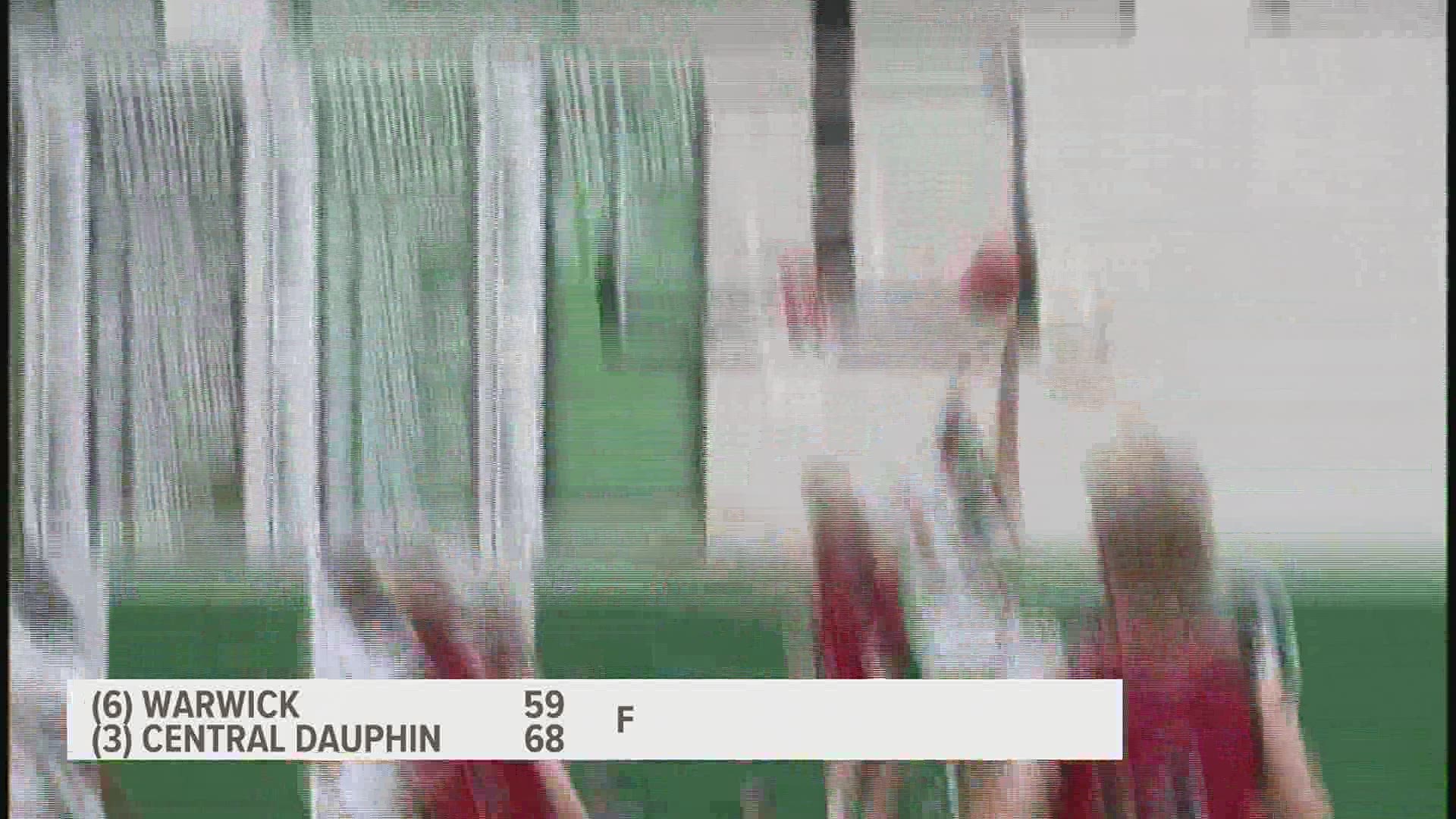 HARRISBURG, Pa. — Huge night of District hoops on the high school hardwood. Just one boys classification in action but it was the big boys up in 6A.

The headline game in the area, Warwick fresh off their first district playoff win since 2010 up against a talented Central Dauphin team.

The Rams would lead this one at the break, but the Warriors fought back. Kai Cipalla put on his Steph Curry and Reggie Miller hats as he knocked down seven triples in this contest to surpass 400 points on the year. Cipalla ended the game with 34 points.

The momentum swung over to Central Dauphin with their defense.

Off a turnover Ryan Smith took one to the rack to rattle the iron and teammate Donovan Hill followed suit.

Not to be outdone Cipalla got some airtime as he tried to keep Warwick close. with a little of that dunk action.

Central Dauphin controlled most of the action as they move on to face Wilson next Wednesday after a 68-59 win.

"We wanted to make sure we got the playoff jitters out so getting a lead early was good for our confidence," said Rams coach Wayne Fletcher.

"When we execute the way we do, we're such a hard team to stop. I feel like the lead took us up a lot and brought the energy for the whole team," said Donovan Hill, junior forward.

Lancaster Lebanon League runner-up Hempfield was on the road against #2 seed Wilson who are the reigning District III champs.

The Black Knights came out strong in the first as Daniel Sears cataloged in a bucket and completed a three point play for an early lead.

Bulldogs stormed back however.  Marquette bound Stevie Mitchell was looking for his 2,000th career point as he slammed one home. The Bulldogs scored 13 of the next 14 points to take the lead.

In the second Mitchell grabs that career milestone with another dunk as Wilson claimed a commanding victory to advance to the semifinals with a 56-30 win.

In the upper half of the bracket Red Lion made the long trip to Reading to tip-off against the Red Knights.  To accommodate fans this game was moved to nearby Berks Catholic.

Early on the Lions roared. If AJ Virata wasn't slashing to the hoop hitting floaters he was spotting up from deep to lead Red Lion out to an early 7-0 spot.  Reading would bounce back, and throughout the first half the lead changed quite often.

Red Lion's leader Davante Dennis was a force as usual adding buckets down low.  His defense was even more impressive, as he sent a message early on with a monster block that Red Lion came to compete and then altered two more shots in short order.

Reading lead by four after three quarters and was steady at the line down the stretch to win 52-42 ending the Red Lion season with a record of 17-3.

Final games are tough, especially for seniors. I love that the @RLAthletics waited to great every player. What is missing from this video is the applause from the parents as the kids emerged. An emotional moment for sure @fox43 @FOX43Sports pic.twitter.com/7FjE4WduU7

The final 6A boys game of the night was Cedar Cliff and Muhlenberg as the Colts looked to gallop into upset city once again as a #12 seed.

Nick Strain and Tyler Houser lit a spark in third quarter to start a mini comeback but Muhlenberg had too much fire power in this one as the Colts season came to an end with 70-44 defeat.

All District III scores are below.