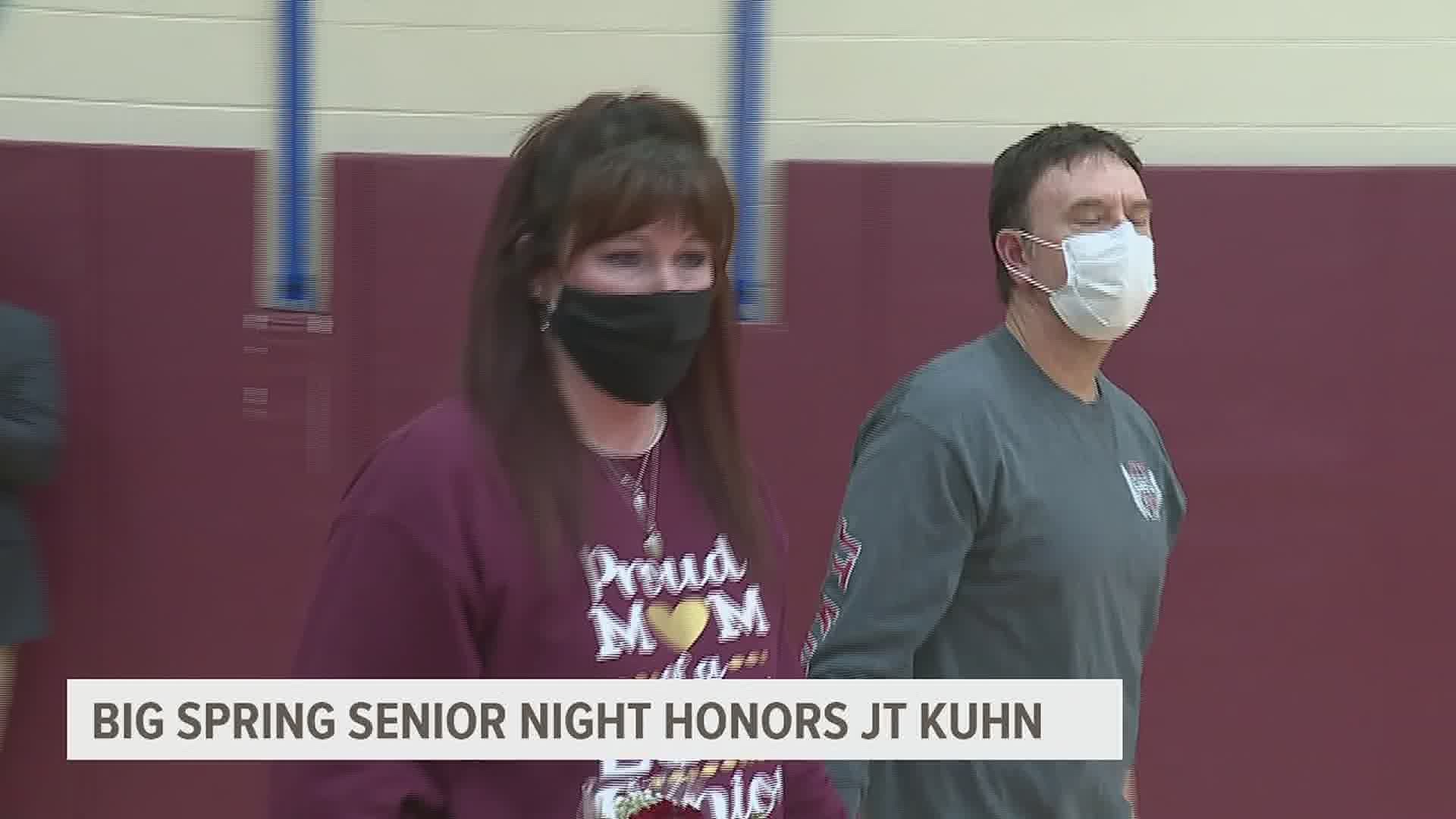 NEWVILLE, Pa. — Big Spring's J.T Kuhn died in March of 2019 of a heart attack at the age of 16. He was a huge presence for the Bulldogs over the course of his time at the school and not just because of his  6' 5" frame. Yes, on the court he helped Big Spring to a playoff run.  But it was who he was off the court that people remember.  A young man that was known for his compassion, his kindness and yes his big heart as he was always willing to give to others.

During Friday night's Senior Game against Northern York the Bulldogs wanted to honor their former teammate who could not attend what should have been his night to walk out with his mother Jenn and father Toby.  While he couldn't be there in person, his parents did the walk together wearing shirts that commemorated their son.

"It kind of hit us when the boys came down the hallway and Jonathan wasn't there," said Toby Kuhn.

"That was tough but we were happy to be there for the other boys because we're all like family. We've been together a long time."

Coming together is what families do.  Friday night when it came time for tip-off four Bulldogs took to the court.  Sixty seconds ticked off the clock, a long minute to reflect and honor their teammate who couldn't be there to play among them.

This wasn't just a one sided honor. Northern York's Nathan McGill, played AAU basketball with Kuhn.  During pre-game, he found Toby and Jenn in the stands, walked over and presented them with a jersey and hug.  As Toby said, "We're all like family".

"Special thanks to Coach McGill and his understanding of our situation."

"That's tough to be a part of that and understand where we're coming from. Coach McGill's son Nate played in an AAU league with J.T. and we thought it was best to pick Northern due to that connection."

On emotional nights teams can start hot, filled with adrenaline that carries them to unseen heights.  A level maybe only currently J.T. Kuhn knows, but one we are all destined to achieve at some point.  When or how that takes place we don't know, and sometimes we don't understand the how or the why.  In 2019 teammates and friends may not have understood the "why" or the "how" of J.T.'s passing.  Friday night though everyone knew the "why" of him being remembered and they knew just "how" to do it, as a member of this Big Spring basketball team.

First minute of the game, the bulldogs played with a missing man honoring the late JT Kuhn. Highlights on @FOX43Sports at 10! pic.twitter.com/7TaiWFi463