All-Stars invade Central PA; Larson picks back up where he left off | Fast Lane

Kyle Larson has first 410 start of the year and doesn't come as a surprise "Yung Money" landed in victory lane. 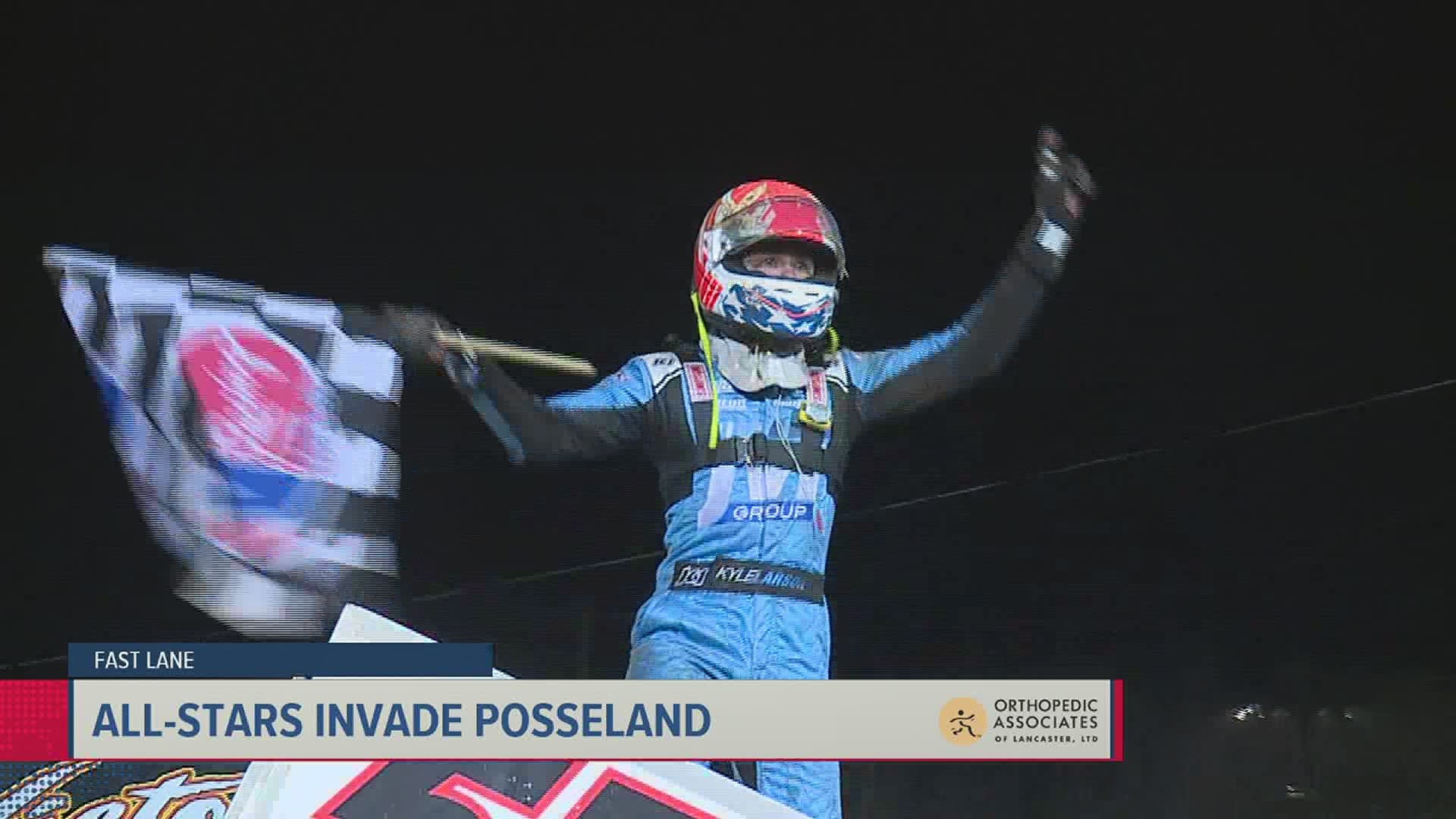 CUMBERLAND COUNTY, Pa. — The All-Star Circuit of Champions made their first of four swings to Central PA but all eyes weren’t on the Pa Posse or the All-Stars Friday night at Williams Grove. They were on a driver by the name of Kyle Larson, making his first 410 start of the year after he captured over a dozen wins in posse land last year.

"It's a lot of fun. I love racing. I've been in my motorhome traveling around this week. It's cool to get some time behind the wheel," said Larson.

"Yung Money" raced four nights this week with two in the late model, one in the sprint car then in the Cup Series on Sunday at Richmond.

In the third heat, Landon Myers hit the inside guardrail and went onto his lid and came to a rest on all fours. Then in the fourth heat, Chad Trout completely ripped his car apart on the front stretch. He was okay and climbed out under his own power.

Larson looked to defend his "Tommy Classic" title but he had to battle a fast Lance Dewease as he had the quickest time in time trials and picked up the pole in Dash No. 1 and just took off from the field to win the dash.

The Madsen brothers were able to catch up as Ian picked the pole in Dash No. 2. Larson started fourth and moved to second before even completing the first lap. He dropped to the inside of Madsen on the final lap to win the second dash and start right next to Dewease.

Friday night was also nothing but problems for Danny Dietrich. The team changed the motor twice and finished second to Brent Shearer in the B-Main; who locked himself into his very first All-Star A-main. Dietrich barely made it out on time for the feature. Just as the four wide parades around the track, Double D finally pushed off.

Three laps into the A-main, TJ Stutts tipped over after blowing a right rear. The team changed the tire and Stutts came right back out.

Just before the field caught up to lap traffic, Larson got a run on the high-side to pass Dewease. "Yung Money" denied Dewease of reaching his 100th at the Grove.

“Really, honestly, the dash was probably the most important thing for me. You know, starting from fourth. I was wanting to at least get one car, if not two. We were able to get all the way to the win. I knew once we could line up on the front row with Lance, I’d have a really good shot beating him," said Larson.

Larson continues to add to his remarkable stretch. Crazy to think that was his first time out in a 410 this season and it's his first 410 win of 2021.

In the 358s, Tyler Brehm and Whytt Hinkle racing for the lead. Hickle went right up the race track, spins out and handing the lead to Brehm. Derek Locke, last years Williams Grove Track Champ started 8th in the feature. He tracked Brehm down and took it three wide in the turn with a lap car. After a restart, he knew he had the faster car. Locke won the first 358 race at the Grove this season.

“I mean, winning is hard. Everything has to go together. Whenever you can get a win is definitely a step in the right direction and I’m proud of this team," said Locke.

The All-Stars moved onto to Port Royal Saturday night. 2020 "Speed Palace" Track Champion, Logan Wagner, went from fourth to the lead but it’s the "Concrete Kid" who’s the hard charger and last weeks winner, Anthony Macri looking to win back-to-back. He advanced 19 spots, 21st to second. With two laps left, the duo battled side-by-side then "The Pilot" just took off on Macri to win his first All-Star race since 2017.

At the fabulous Lincoln Speedway, polesitter Tim Shaffer tried to hold off defending track champ Freddie Rahmer and Chase Deitz. The leaders nearly go three wide on the final lap. Rahmer was able to pass Shaffer driving the middle then Deitz tried to steal second from "The Steel City Outlaw. Rahmer won his first feature of the year.

In the 385s, Ashley Cappetta held off Justin Foster and led all 20-laps for her second career victory at Lincoln.

“When you have so much expectations for yourself, where you start is where you want to finish. I just tried to keep my cool and tried to run my own race and I saw Justin (Foster) come up beside me and knew I had to drive it that much harder,“ said Cappetta.

Anthony Macri closed out the All-Stars swing in Pa at Bedford with his second career All-Star feature. Macri has placed in the top five in the last three races.