VERIFY: Can kids transmit COVID-19 to other kids or adults? 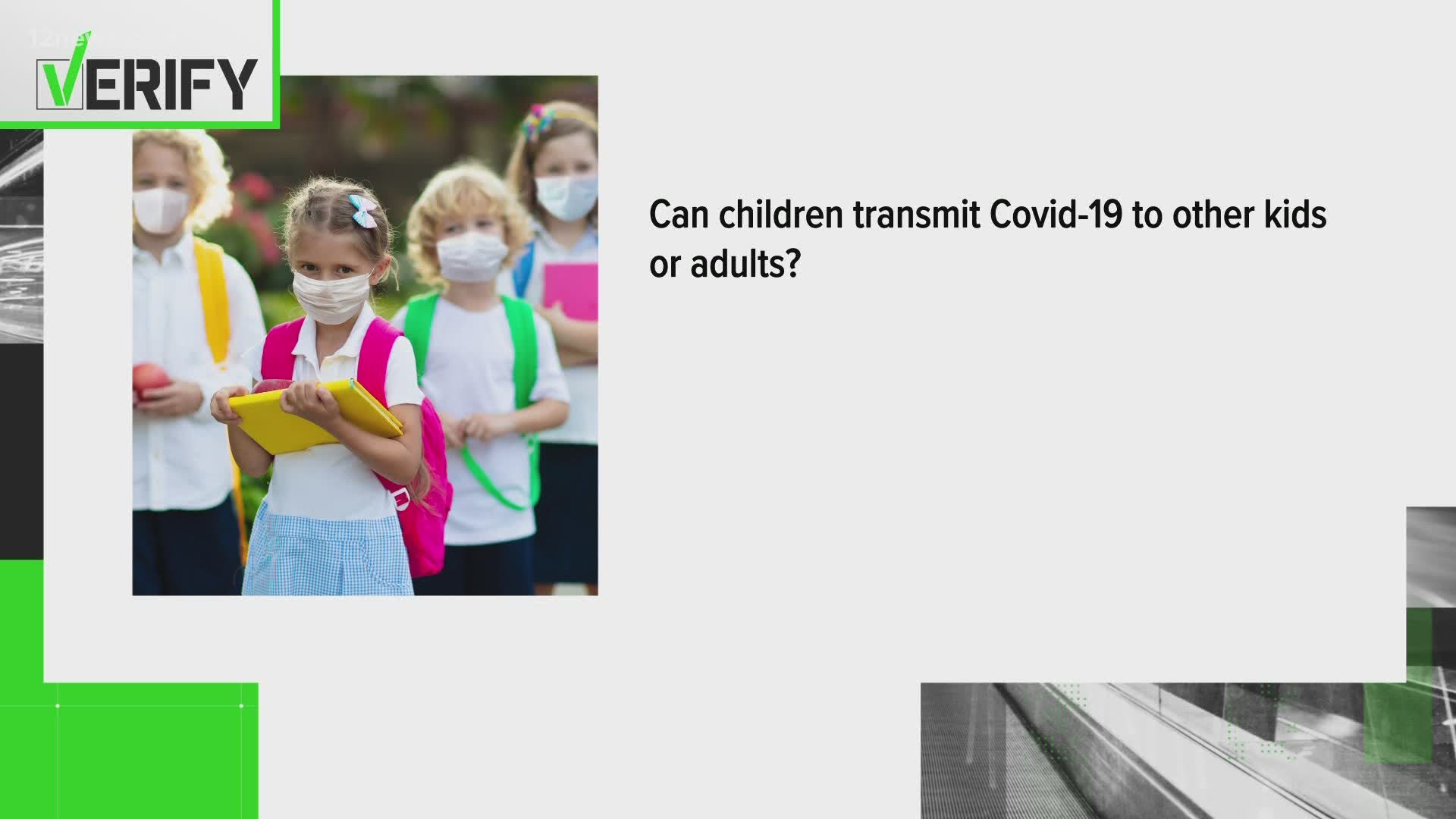 ARIZONA, USA — Schools across the nation are deciding when and how to best bring children back to classrooms during the coronavirus pandemic.

Distance learning and cleaning measures are geared toward keeping children and their families safe. But, just how dangerous could it be if a child tests positive for COVID-19 and comes in contact with other classmates and staff?

During a recent live stream, where medical professionals called on Arizona Governor Doug Ducey to delay the reopening of schools, multiple people on social media said that there haven’t been any cases of children transmitting the virus to teachers anywhere in the world.

These are some of the comments that were posted.

The VERIFY team dug into medical research from reputable institutions and scientific journals around the world to bring some clarity to these claims.

Can children transmit COVID-19 to other children or adults?

Yes. There have been multiple instances across the world of children starting outbreaks at newly reopened schools. Also, research shows that children have a similar “viral load” and “viral shedding” capacity compared to adults, meaning that they are just as infectious as, if not more infectious than, older people.

Let’s start with the basics. We know that children can become infected with COVID-19, though they don’t get as sick as adults do.

As of July 21, the CDC estimated that children make up around 6.6% of reported COVID-19 cases and less than 0.1% of COVID-19-related deaths.

Additionally, a recent report shows that 97,000 children across the U.S. have tested positive in the last two weeks of July. The report, created by the American Association of Pediatricians (AAP), was made with publicly available data to measure the risk of children being infected and inform school administrations on when to bring children back to classrooms.

According to the report, Arizona had the most cumulative COVID-19 cases per 100,000 children and the third-highest number of child COVID-19 cases.

Arizona's high rank in the report shouldn't come as a huge surprise given the state's history with COVID-19, according to Pediatric Infectious Disease Specialist Dr. Sean Elliot.

"It was only a couple of weeks ago that Arizona in terms of its overall attack rate was number one not just in the country, but number one in the world," Dr. Elliot, who is also a member of the Arizona chapter of AAP, said. "Of course it makes sense that if there's that percentage of an attack rate, meaning the number of healthy humans becoming infected, it's going to drive those cases among the kids."

But, when children become infected with the virus, can they transmit it to others?

A commentary from the University of Vermont, published in the journal Pediatrics this past July, said that schools should be able to reopen in the fall as long as safety guidelines are observed and community transition is low. In the commentary, doctors point to schools in countries such as Switzerland, China, New South Wales, and France, where cases of an infected child or group of children exposed several other children and staff without getting anyone sick.

While these events did happen, it doesn’t tell the entire story. There are other instances from places such as Canada, Chile, Israel, and France where outbreaks flared up at schools due to infected children. Some of the schools had just reopened, only to be closed soon after due to the spread of the virus.

These specific instances are too varied in terms of school size, location, and contact tracing measures to create a concrete answer on how infectious children are.

Instead of using specific cases to determine if children can spread the virus, experts have turned to measuring something called "viral load” and “viral shedding.”

Numerous scientific journals and agencies, including the New England Journal of Medicine, Nature, and the European Center for Disease Prevention and Control, have found information that points to the higher the viral load is in an individual, the more infectious they are likely to be.

So, how high is the viral load in children?

There are at least 36 studies that looked at coronavirus positive children either exclusively or in combination with adults.

In all those studies, no differences were found with regards to viral load or how long the virus was detected in children compared to adults.

Here are some excerpts from those studies:

"Young children can potentially be important drivers of SARS-CoV-2 spread in the general population, as has been demonstrated with respiratory syncytial virus, where children with high viral loads are more likely to transmit," a study from JAMA Network said.

“We observed…no correlation between RNA load and age,” a study from the CDC said.

“SARS-CoV-2 shedding patterns of culture competent virus in symptomatic children resemble those observed in adults. Therefore, transmission of SARS-CoV-2 from children is plausible,” a study from the Pan American Health Organization said.

“The reason that shedding time of the virus is longer in children than in adults is because the former often have poorer hand hygiene practices than the latter. Thus, discharge criteria should be carefully evaluated, especially among children,” a study in the Journal of Microbiology, Immunology, and Infection said.

Dr. Elliot also pointed to another recent report out of South Korea. The report broke findings down even further, finding that children between the ages of 1 and 9 had a low rate of transmitting the virus, but kids between the ages of 10 and 19 seemed to have the same, or even higher, risk of transmitting the disease to close contacts compared to adults.

"This is exactly the model we see with tuberculosis, measles, and other highly infectious airborne things," Dr. Elliot said. "They looked at families compared to community spread and family exposure rate was around 10% higher than the community spread."

According to the research, children are just as much at risk of transmitting COVID-19 as adults are. They are just as infectious when it comes to COVID-19 due to similar levels of viral load and viral shedding that adults have.

Need something VERIFIED? Email verify@12news.com to submit your story.