Dressed in green and armed with rifles -- individually, they are police officers, but together, they're a specialized team. 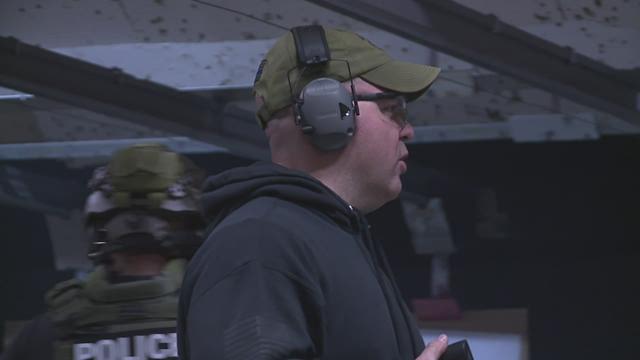 "Who else would people call if they didn't have you guys?" asked FOX43's Grace Griffaton.

"In the United States? Nobody. I mean, the military can't operate domestically," responded Barrie. "if something goes seriously wrong it's your police officers and tactical teams who will go in and deal with it."

When Barrie isn't training for SERT, he works for Lancaster Bureau of Police. FOX43 got a behind-the-scenes look at how team members train on the range and practice warrant services.

"We're required to have so many training hours over the course of the year. To an extent, it's a sacrifice, but it's well worth it," Barrie told FOX43.

Depending on the police department, officers may get overtime to compensate for training and call outs, but as the commander would say, no special treatment.

"They’re held to a higher standard, but when they’re back in their home departments, they’re still doing the same jobs all the officers do every day," said James Zahm, Lancaster County's SERT commander.

When he's not leading the team, Zahm is also a county detective. Since its inception, he says SERT members have only shot two people.

The goal isn't to hurt the bad guy; it's to catch him before he does damage to himself or others.

Besides weaponry training, members also learn explosive breaching. The charges they make can either push a door in or cut it clean off its hinges.

"We do a lot of math and preparation before each explosion to figure out how close we can be," said an officer who can't be identified. "If we know what we're getting into, it can take a few seconds or if it's a very complicated situation, and we have time to preplan, we can build a charge based on our needs at the moment."

It's training that can make the difference in a life-threatening situation.

"It's hard to beat the fun of blowing things up, but it’s good to know if there is a true emergency situation, we have every tool at our disposal to be in a room as quickly as we can," added the officer.

There are also tools to protect members from who may be inside a house or building.

The Pennsylvania State Police or PSP has a fleet of ballistic vehicles for its team. Its rook has been hit with bullets three times, and it has saved multiple lives, according to Corporal David Brodeur.

"We avoid the term elite. We're a solid group of guys, and when we have a call out, we're focused on a mission. Nothing is going to stop us until we complete our mission," explained Cpl. Brodeur. "The biggest thing is I love police work, and at the very basic level, we’re catching bad guys."

Troopers on SERT handle the same kind of situations as a county team but more frequently. Last year, Lancaster County SERT was called out 10 times. In comparison, PSP responded 227 times.

SERT have experienced an increase in callouts every year since 2015. 2020 might involve even more work, Brodeur says.

"With election year, Pennsylvania is a battleground state, so we’re often doing motorcade security for the President, Vice President," he explained.

One team covers the eastern part of Pennsylvania; another covers the west with callouts lasting anywhere from a few hours to much longer.

"We won't make the call to go into a house because of time," said Brodeur. "If it's an issue of exhaustion, we've been there 14, 15, 20 hours, we'll call our counterparts from the west SERT team."

SERT members work long hours, wear heavy equipment, and face an increased risk of being hurt or killed - so why would they do it? Members cite a desire to protect and serve and a sense of comradery you won't find on other teams.

“You put your life in their hands," added Brodeur. "It’s a matter of trust. You know what the other guy is going to do hopefully, and they’re going to have your back and trust them."

SERT services can be life-saving but at what cost? One year's operating cost in Lancaster County is estimated at $100,000. For Pennsylvania State Police, it can cost up to $14,000, and that's just for one 8-hour callout.