The governor outlined his fall legislative agenda on Tuesday. He also urged lawmakers to put $225 million toward hazard pay for pandemic front-line workers 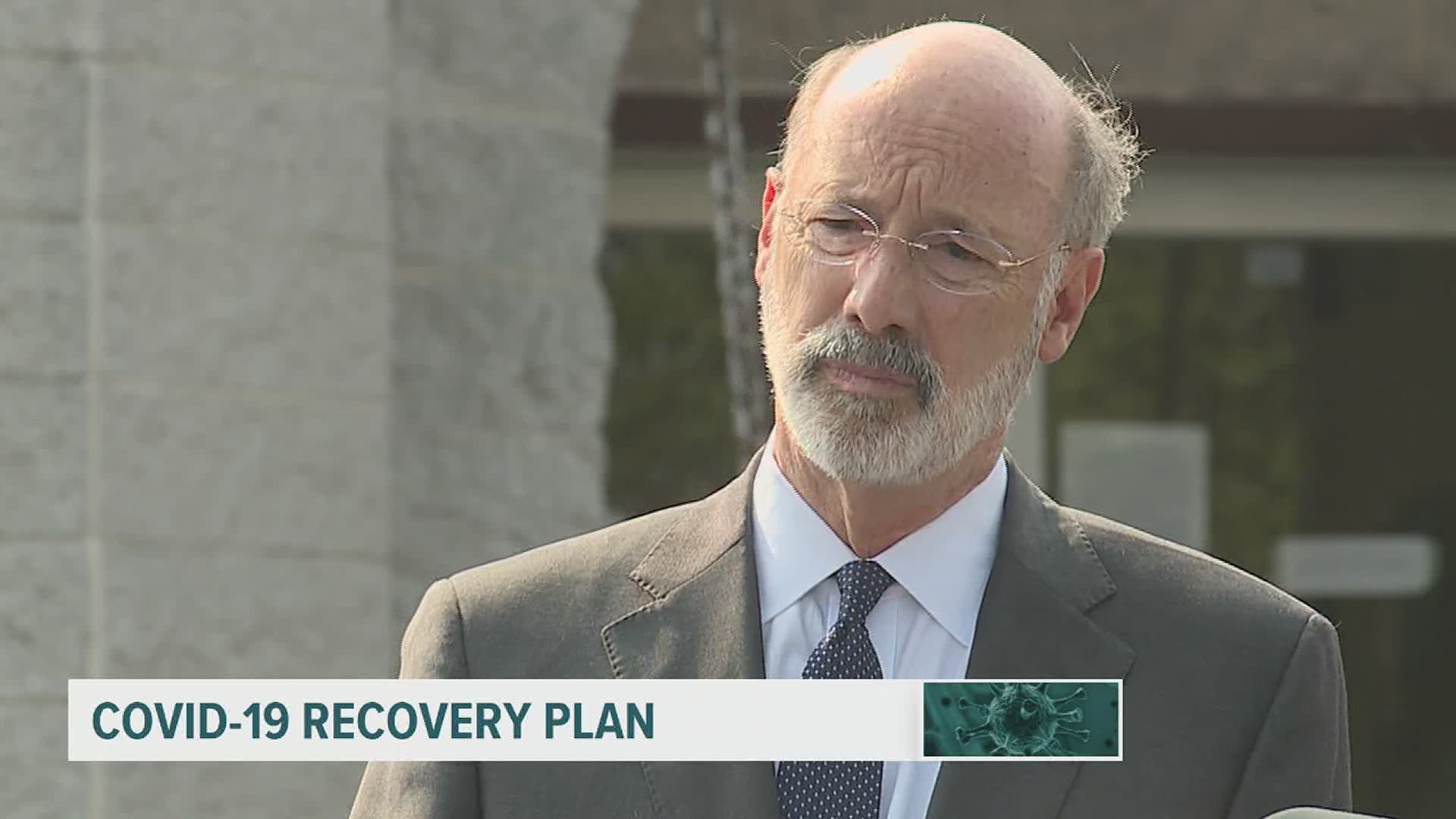 HARRISBURG, Pa. — Gov. Tom Wolf on Tuesday asked lawmakers to send him a bill to legalize the recreational use of marijuana, and outlined how he thinks the state should spend more than $1.3 billion left in federal coronavirus relief funds during what's left of lawmakers' two-year session.

"This might be one way to plug a hole," said Gov. Wolf on legalizing recreational marijuana to increase state revenue. "I think it's also a way the state could get some tax revenue from something people are evidently already doing."

The Democratic governor urged the General Assembly to put $225 million toward hazard pay for more than 200,000 workers on the front lines of responding to the pandemic, effectively giving them all $3-an-hour wage increases.

"Repairing the damage of this pandemic is not going to be easy" said Gov. Wolf. "The legislature can act right now to get us back on track as quickly as we possibly can but we got to do it now. We must provide protections for families and workers and help small business."

The state House and Senate have 11 session days over four scattered weeks left before the November election, a limited period to wrap up their business as the two-year session winds down.

Leaders of the Republican majorities in both chambers have criticized Wolf during the pandemic period for what they consider a governing approach that has not given them sufficient input, and Wolf's agenda is highly unlikely to be enacted in full, or without changes.

Pennsylvania received nearly $4 billion in federal coronavirus funds, but when lawmakers and Wolf allocated about two-thirds of it earlier this year they set aside the $1.3 billion that remained, and Wolf wants to spend that reserve.

House Majority Leader Kerry Benninghoff, a Republican from Centre County, was dismissive of the governor's proposals.

"It is disingenuous for this governor to put forward an unaffordable legislative agenda and require taxpayers to bail him out of his unilateral mandates that have devastated their lives and livelihoods," Benninghoff said. He said a House session next week will focus on "finding the normalcy Pennsylvanians have long desired."

Wolf wants to direct some of the tax revenues from the sale of recreational weed to a program to repair what he called a release of "the harm done to crime victims and communities as a result of marijuana criminalization."

About half the proposed weed tax would go to help historically disadvantaged businesses, which are those more than half owned and operated by people who are Black, Hispanic, Native American or Pacific Islander - groups deemed to have traditionally been discriminated against in financial dealings.

Wolf signed legislation authorizing the state's medical marijuana program in 2016, and last fall announced he also supported making the drug legal for recreational purposes. Pennsylvania law treats possession of any marijuana outside the medical marijuana program as a crime, although there is a diversion program for first-time, nonviolent offenders and a few municipalities have enacted what is effectively decriminalization of possession of very small amounts.

Wolf's plan for the federal coronavirus relief money would spend $225 million for forgivable loans and grants through the COVID-19 Relief Statewide Small Business Assistance Program. Another $100 million in forgivable loans and grants would go to the hospitality, leisure and service industries, including restaurants, bars, salons and barber shops. Wolf also wants to spend $10 million to help employers buy personal protective equipment and cleaning supplies, with grants of up to $5,000 for businesses with fewer than 150 workers. The money would also fund masks, shields and cleaning supplies for county election workers.

Wolf proposes $250 million for child care, including $50 million so low-income communities can establish safe remote learning systems in school districts that will not have in-person instruction.

The governor also wants $100 million for a grant program to help prevent gas, electric and water utilities from being shut off at homes. He also urged lawmakers to help low- and moderate-income renters.

The governor's fall legislative agenda also calls for suspending the alcohol tax for six months and letting businesses purchase booze at cost from the state during that period, both measures designed to help the state's restaurants and bars.

Wolf also repeated his call for a ban on gifts to public officials, limits on the size of campaign donations and greater disclosure of outside income by public officials. Wolf has banned gifts for the tens of thousands of state workers under his jurisdiction and is calling for a state law to make the ban apply to state elected officials.