Since its installation, both supporters & critics of President Trump have voiced their stance. 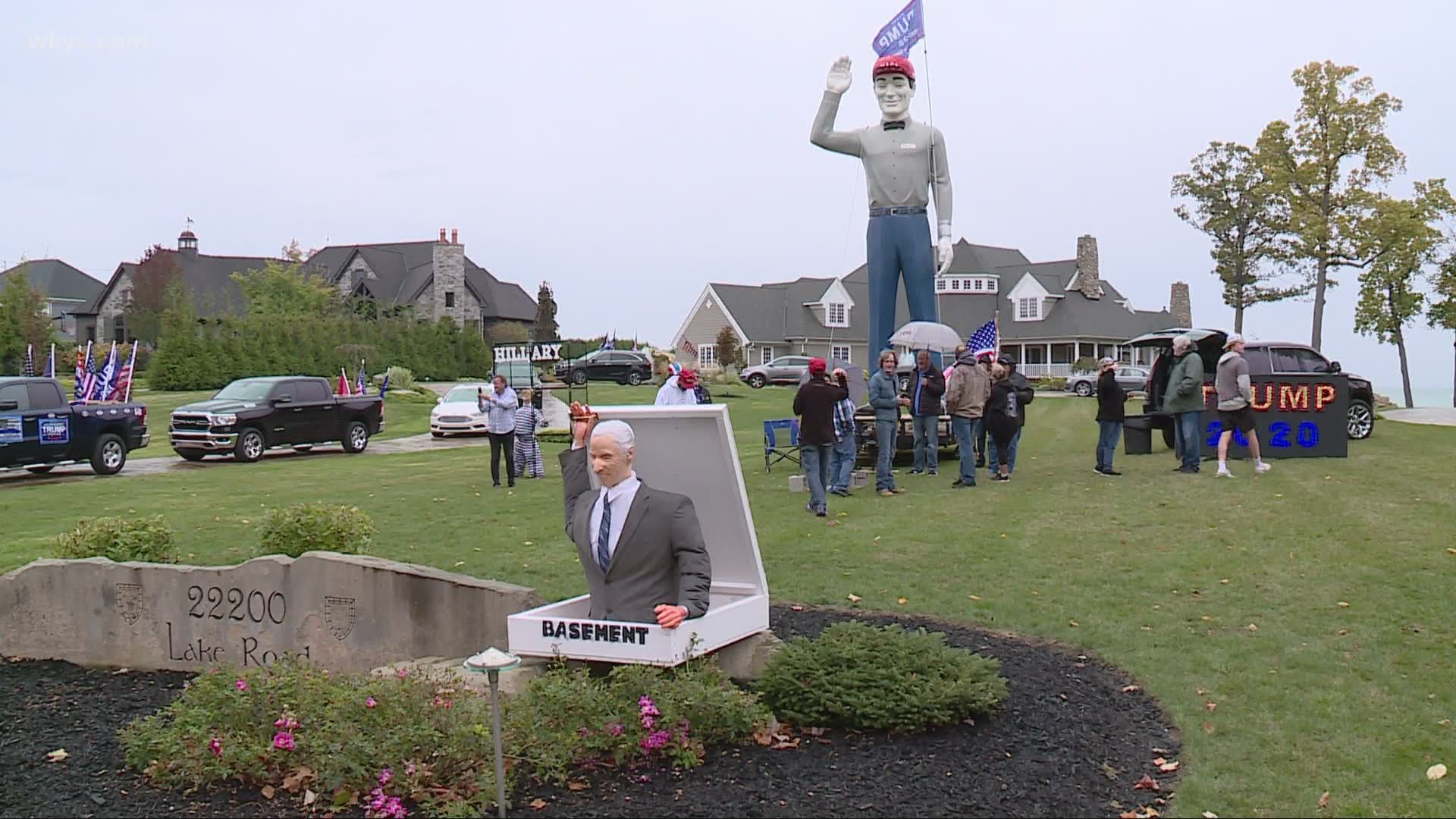 ROCKY RIVER, Ohio — A group of about 40 people of all different ages protested outside a Rocky River home Sunday afternoon, facing off against each other on opposite sides of the road. About half supported President Trump and half supported Democratic nominee Joe Biden.

It was over a Lake Road lawn display featuring a giant likeness of the Texaco gas man wearing a Make America Great Again hat, with pro-Trump flags and signs.

"We are avid Trump supporters," said homeowner Adrina, who only wanted to give her first name. "We support all lives and my husband likes to put up big things. If you see our house during Christmas, we put up a big tree, so why not put up a big Texaco guy and support our president?"

Adrina said she knew the display would get a reaction, but she didn't expect this kind of protest and she makes no apologies for it.

"People are very hateful and say horrible things just because we support [President Trump]. They automatically judge you and it's kind of sad."

What really got Biden supporters riled up, though, is another part of the display; A likeness of Hillary Clinton behind bars in prison stripes. And while it wasn't there on Sunday, just days before there was also a toilet bowl with a sign reading "Deposit Biden Votes Here."

"I am against this obnoxious display of wealth and entitlement," Barbara Fazio, who organized the pro-Biden protest, told 3News.

"I have the sense that people are more on edge," Jonathan Entin, a law professor with Case Western Reserve University, summised. "They're more identified with their side than maybe used to be the case."

"There are some folks who are reluctant to put up signs because they're concerned about whether they will in fact be left alone," he pointed out.

Bratenahl resident William Masters knows the feeling: Someone destroyed every pro-Biden sign he's put on his property since August, so now he planted 19 across his front lawn and has a camera on the signs.

"I just find it a shame that our country has turned to these kinds of antics," he said. "I think we need to take the temperature down, respect everyone for what they believe in, and let processes like the election or what candidates have to say be said respectfully and openly but not attacked or insulted.”

While Federal law protects the rights of people to display political ads, municipalities can regulate the size, placement, and shape of signs. However, Entin says sometimes the law is less effective than humor in bridging divisions.

Since it's installation, both supporters and critics of President Trump have voiced their stance on the large spectacle. On Twitter, Jim M (@ottomul), shared his excitement over the display, even tagging the president in his tweet.

⁦@realDonaldTrump⁩ Mr President this went up Friday in Rocky River Ohio .
Has to be 40 feet tall !! MAGA pic.twitter.com/FHSIDJKFgK

While in contrast, Chris Morris, who claims to be the neighbor of the display owner is reminding people to vote.

"Vote like your life depends on it because giant MAGA Man will emerge from Lake Erie if you don’t," his tweet read.

There’s a family here in my town of Rocky River, OH, who has a #MAGA boner. Good lord, what a way to spend your Trump-lovin’ dollars. Vote like your life depends on it because giant MAGA Man will emerge from Lake Erie if you don’t. pic.twitter.com/t8XhNPkwcs

As of Thursday, more than 22 million Americans have already cast ballots in the 2020 election, a record-shattering avalanche of early votes driven both by Democratic enthusiasm and a pandemic that has transformed the way the nation votes.

For more information on how to cast you ballot this year, click here.