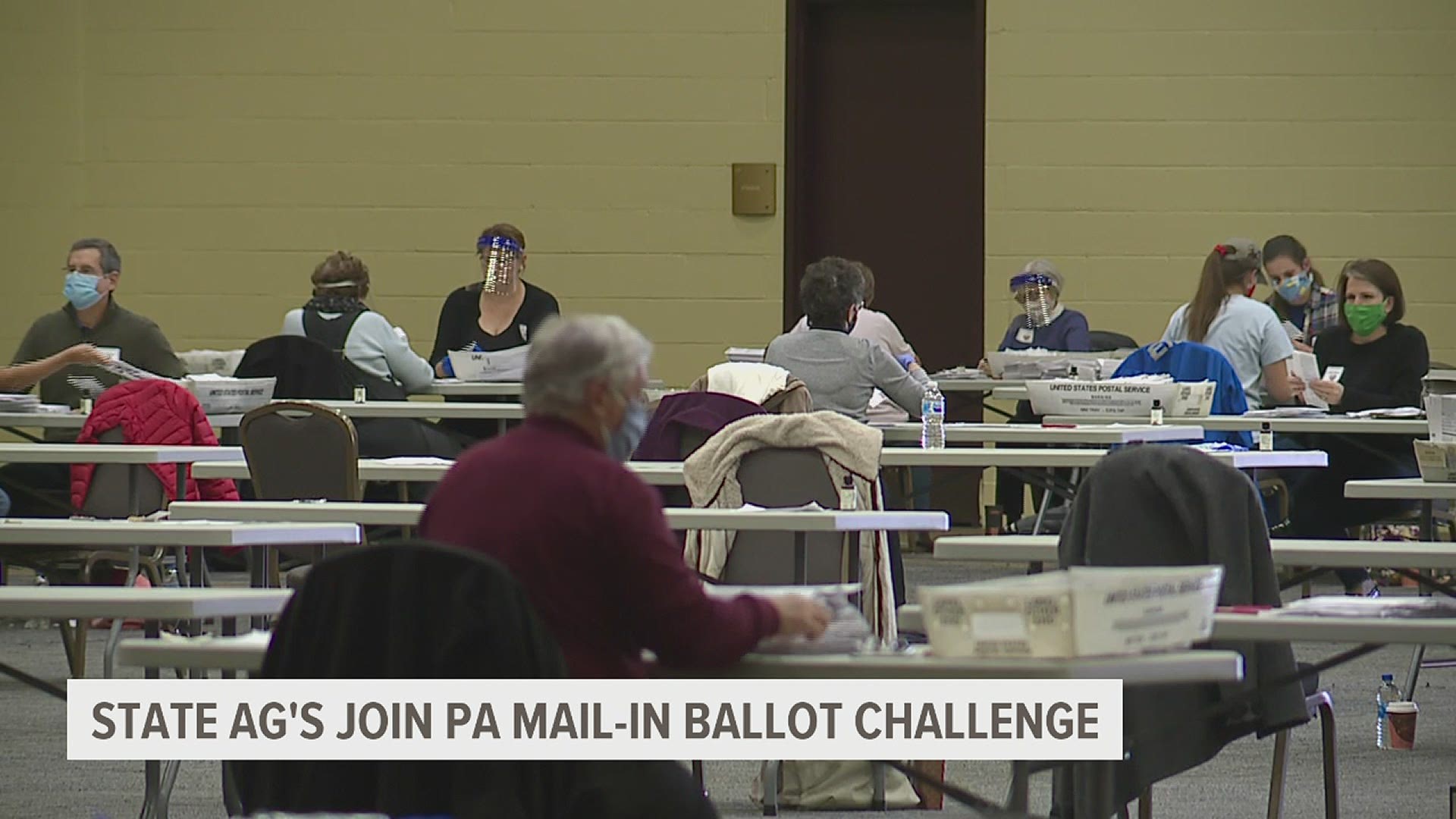 Both lawsuits challenge a decision made by the Pennsylvania Supreme Court in October mail-in ballots could be counted if they were received by Friday, Nov. 6.

An amicus curiae brief, also known as an amicus brief, is filed by someone not a party to a case who assists a court by offering additional information on the case in question.

The Republican Attorneys General’s amicus brief argues the three-day ballot acceptance extension violates the U.S. Constitution elections clause, which states, “The Times, Places and Manner of holding Elections for Senators and Representatives, shall be prescribed in each State by the Legislature thereof; but the Congress may at any time by Law make or alter such Regulations, except as to the Places of chusing Senators.”

The Attorneys General said at a press conference announcing the amicus brief that the Pennsylvania legislature—and not the Pennsylvania Supreme Court—is the only body with the power to change election ballot rules.

“The actions of the Pennsylvania Supreme Court are one of the most breathtaking abuses of judicial authority that I’ve seen in my four-plus years as Attorney General,” said Oklahoma Attorney General Mike Hunter (R).

However, the Supreme Court has in the past construed the term “Legislature” extremely broadly to include any entity or procedure that a state’s constitution permits to exercise lawmaking power, according to the Constitution Center.

The head of the amicus brief effort, Missouri Attorney General Eric Schmitt (R), said the legal action would have an impact beyond Pennsylvania in assuring the American people that elections are run fairly.

“Beyond just the outcome, the principals are very important that the legislature is given the authority by the United States Constitution to create a framework by which elections are going to be held,” Schmitt said.

RELATED: Gov. Wolf calls for patience as Pennsylvania's votes are counted, says he will fight any attempts to influence the election

The U.S. Supreme Court last week refused to rule on the ballot extension decision, in effect allowing it to stay in place. The Justices wrote in an opinion that they could revisit the issue after the election.

However the chances are slim that the Supreme Court will take up the case again, legal experts said, especially given that the ruling was in place while Pennsylvanians were voting.

“If the Supreme Court had taken the case two weeks ago, the rules could have been place before the election. Now people will have voted after hearing the Pennsylvania Supreme Court’s ruling, and the Supreme Court would be in the position of undoing an election that has already occurred,” said Michael Dimino, law professor at Widener University Commonwealth Law School.

The Administrative Office of Pennsylvania Courts commented on the amicus brief, writing in an email,

“The [U.S. Supreme] Court’s Opinion speaks for itself.”

But even if the Supreme Court were to strike down Pennsylvania’s three-day ballot acceptance extension, it likely would not change the election’s outcome. Pennsylvania Secretary of State Kathy Boockvar has said the number of ballots that arrived after Election Day was possibly in the hundreds, but flipping the state’s election outcome would requires thousands more ballots.

The Republican Attorneys General said changing the outcome, however, wasn’t the point of the lawsuit.

“Irrespective of who the president is, we will continue to ensure the rule of law is respected,” said Louisiana Attorney General Jeff Landry (R).

Pennsylvania Attorney General Josh Shapiro (D) responded to the filing in a statement:

“This is the latest meritless lawsuit to challenge Pennsylvania’s election, which was overseen by bipartisan election officials and was lawful, fair and secure. For months, the vast majority of these lawsuits have been dismissed and found to have no merit by Courts at all levels, and this one is no different. I am confident Pennsylvania law will be upheld and the will of the people of the Commonwealth will be respected in this election.”