Pa. legislature votes only 1/4 of all work days. What do they do when they're not in Harrisburg? | Price of Politics

FOX43 asked the 45 state representatives and senators in the viewing area to provide calendars for their non-session work days. No one did. 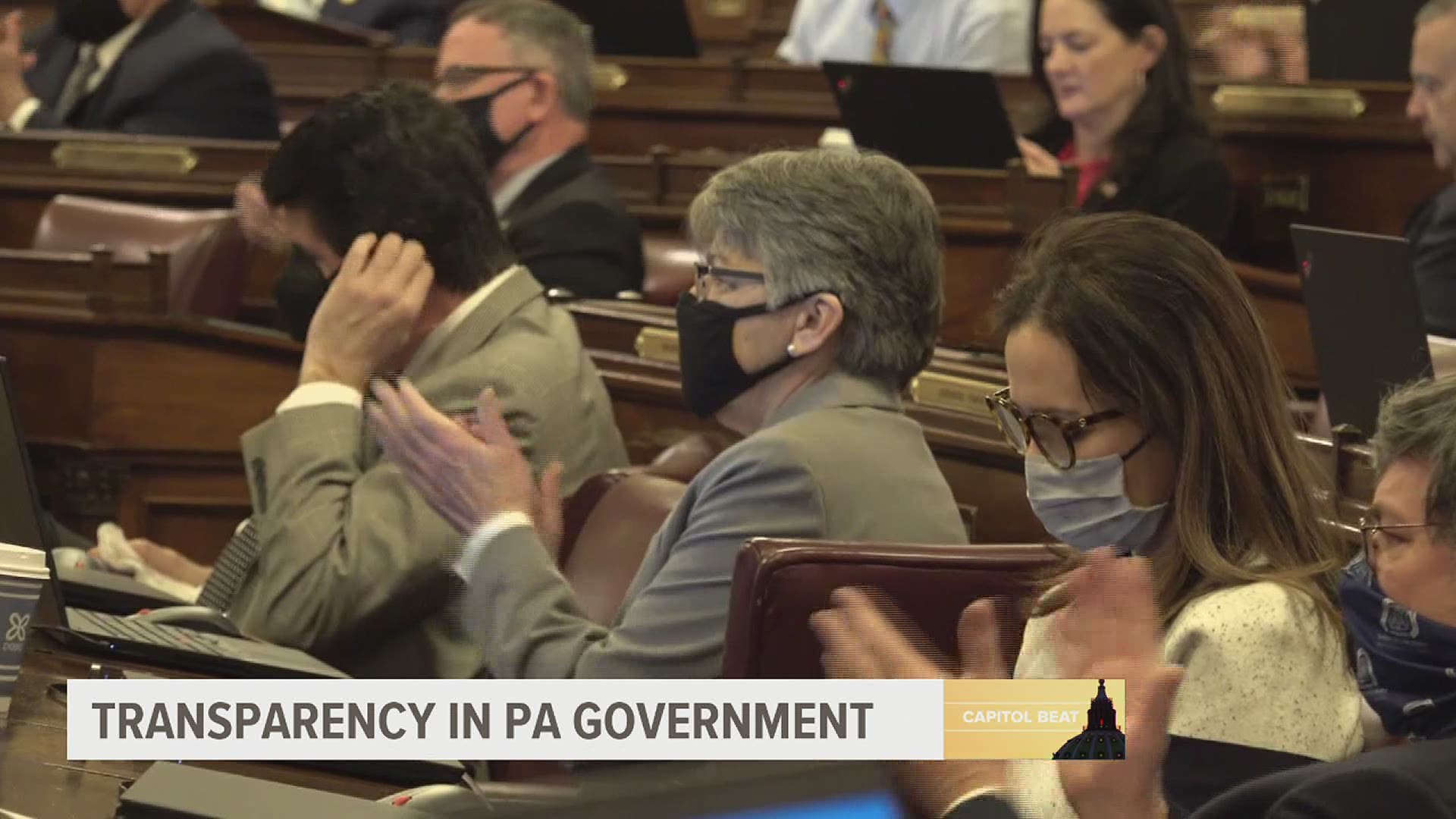 HARRISBURG, Pa. — State Representative Andrew Lewis of Dauphin County wants you to know he loves his job, but maybe the days away from the State Capitol are better.

Those days, considered by the legislature as non-session days as the 203-person House of Representatvies or 50-person Senate don't have to vote on legislation at the Capitol, are typically spent by lawmakers inside their districts, meeting with constituents, and writing and reviewing legislation.

On this day in mid-April when FOX43 visited Lewis at his office in Lower Paxton Township, he was working on a bill to improve public utitlies for volunteer fire and emergency service companies.

"I can hyperfocus on these issues, and it's not going to be the firehouse effect of all the legislation we consider on any given legislative day," the second-term Republican said.

Lewis' feelings are shared by a number of state legislators. State Rep. Patty Kim, a Democrat in neighboring Harrisburg, says she gets more accomplished on non-session days. In the past year, constituent services like helping people collect unemployment checks, find vaccine appointments, or seek jobs during the pandemic have taken up a great deal of time. Kim, specifically, deals a lot with trying to curb violence which takes place in Harrisburg and Steelton.

"We have incredibly serious needs out there, and this is the time that we go out and talk to [out constituents] face-to-face versus sitting in a beautiful chamber trying to get bills passed," Kim said. "Especially in my party, very few passed."

FOX43's "Price of Politics" series has attempted to shine a light on the work that gets done -- or depending on who you ask, doesn't get done -- inside the state legislature. In the 2019-20 session, 4,198 bills were introduced by state representatives and senators. Ultimately, only 770 were moved out of committee, and 311 made their way to Governor Tom Wolf's desk. To Rep. Kim's point, fewer than a fifth of all House and Senate bills to move were from Democrats, and even fewer - 7 percent, or 19 bills specifically - made it to the governor.

Critics have argued one of the reasons for the lack of bill movement is the legislature needs more voting session days on its calendar. In 2020, of the 267 business days in a year, the House met in Harrisburg to vote 53 of those days. The Senate met 52 days.

However, state legislators argue the work which is done outside of session days is just as, if not more important, to their constituents.

"To think that, looking at our session calendar, [state lawmakers] just sit around on this beautiful House floor and then summer time, you sit on the beach, it's absolutely not true," Kim said.

FOX43 then asked all 45 state representatives and senators in the designated market area to open their books and provide calendars so their constituents could see what they do when they're not in Harrisburg voting on legislation. (Note: Request was made prior to the May 18 election of the Senate's 48th District) They were not legally obligated to, and were protected by the commonwealth's current right-to-know law.

The list of all 45 state lawmakers are as follows:

"Some of them, it might be security issues in terms of where we are what we're doing every second of the day," Corman said. "Look, we're all held accountable by voters every four years."

Corman purports to be one of the legislature's most vocal proponents of greater transparency. On January 5, in his first speech on the Pa. Senate floor after being elected Senate President Pro Tempore, the highest-ranked position in the General Assembly, Corman directly made a request to senators to show the public more behind the curtain.

"This means making sure all of our operations in the Senate meet the standard of openness. I know some of you put your office expenses online and we all should do more to make sure the public sees how we conduct our business," Corman said.

Corman did not have his expense report online, though he did list his updated salary of $141,019, highest in the legislature.

State Senator Jim Brewster, while not one of the lawmakers who has expenses posted online, has legislation proposed which would make the expense process more transparent.

Brewster, who has a baby-sized boxing glove hanging from the desktop computer in his Capitol office, has wanted to punch-out per diems for the last six years. That's how long he's proposed a bill to ban the use of per diems in the state legislature.

A FOX43 investigation filed with multiple right-to-know requests found lawmakers collected $1,041,121 in per diems in 2020.

"We are doing the public a disservice," Brewster said. "There's no disadvantage to anyone in the General Assembly. They'll get reimbursed exactly what they spent."

Brewster also has a proposal, Senate Bill 363, which would end car leases for legislators in the General Assembly. The practice is currently used by 42 of the legislature's 253-person body, and in 2020, ran taxpayers a bill of $285,941.18.

Brewster is not the only legislator looking to save money with rule changes.

Lewis, along with Rep. Paul Schemel, a Republican from Franklin County, have introduced a bill to make Pennsylvania a part-time legislature. Pennsylvania is currently the largest full-time legislature in the nation. In previous sessions, the bill was led by current House Speaker Bryan Cutler. The bill was never considered in committee.

There is also a movement for more bipartisanship, not necessarily with legislation, but with cost-saving issues at the Capitol. Led by State Reps. Tom Mehaffie (R-Dauphin) and Jared Solomon (D-Philadelphia), the PA One Caucus consists of eight Democrats and eight Republicans, promising to find areas of wasteful spending inside the State House and eliminate them.

Currently, the PA House uses separate print shops, information technology departments, and human resources departments. They believe by merging these areas, over time, the legislature could save taxpayers hundreds of thousands of dollars.

"I understand the skepticism in terms of what's going on, but I'm hearing it from my constituents that they want bipartisan work done," Mehaffie said.

Like anything in Harrisburg though, if you want change, you need votes; 102 in the House, 26 in the Senate. Every two to four years, depending on the office, you get to decide where those votes come from.