Some members of the General Assembly claim the resolution they passed Tuesday night ends the state's business guideline orders. That, Wolf said, is not true. 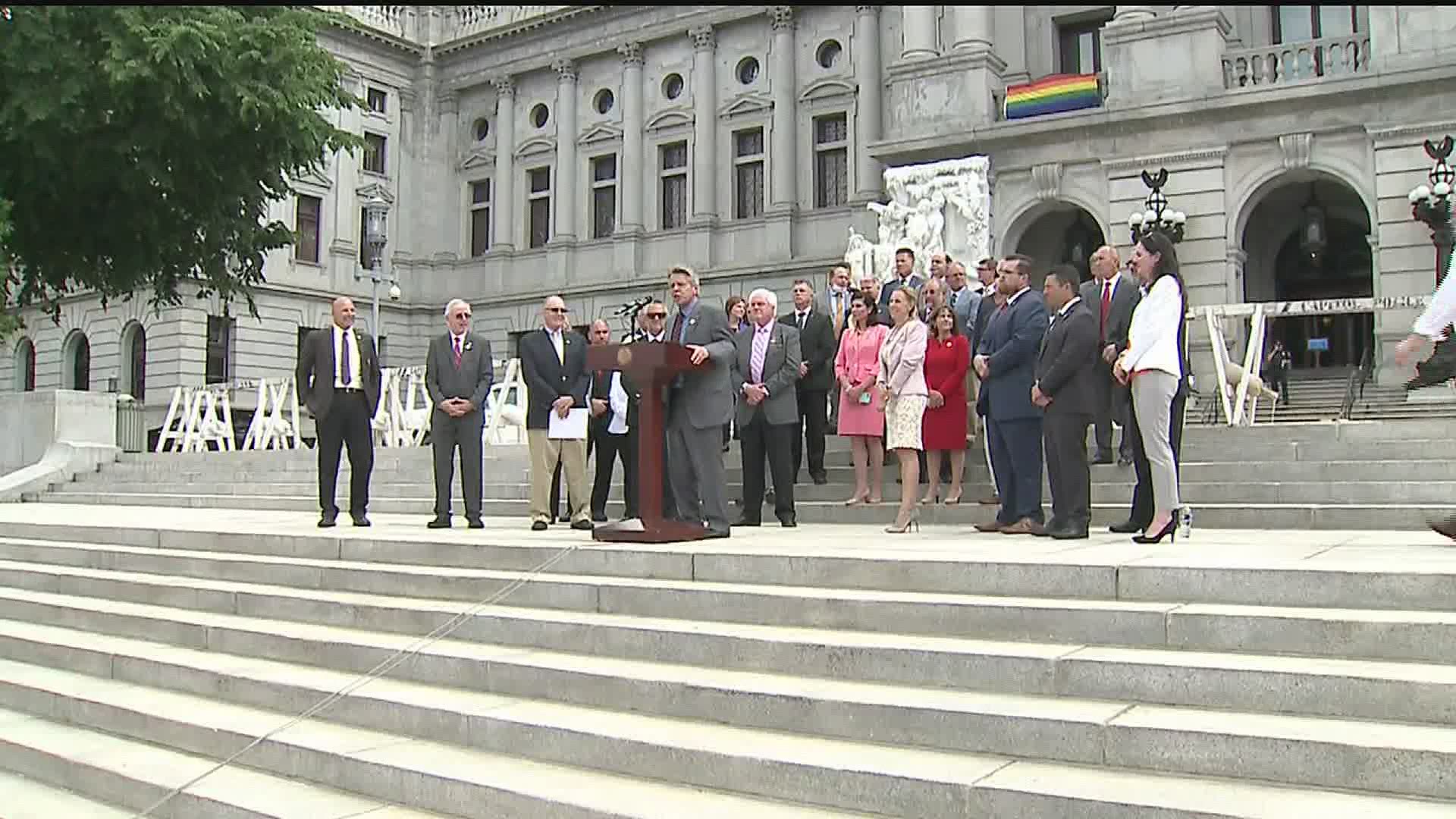 HARRISBURG, Pa. — Who has the ability to end Pennsylvania's disaster declaration and state shutdown?

It depends on who you ask.

The foundation has been laid for a courtroom battle between Pennsylvania's Governor and the Republican-led General Assembly as business owners and other residents across Pennsylvania will be forced to wait and see what the future holds.

Tuesday the State House and Senate passed House Resolution 836 which set out to end Governor Wolf's shutdown order and disaster declaration. HR836 passed the Senate 31 -19 and in the House in a 121-81 vote.

But, Governor Tom Wolf claims the legislature cannot unilaterally end his March 6 disaster declaration issued in the COVID-19 crisis, and the constitutional debate will go to court.

What does this mean for business owners?

Some Republicans claimed the action taken by the General Assembly Tuesday clears the way for businesses to open back up, which Governor Wolf said is not true.

"Ending the disaster declaration would not reopen anything. It just wouldn't and anyone who says differently is wrong," said Gov. Wolf. The Governor added, even if the resolution would stand, the guidelines would not stop for businesses because orders from the PA Department of Health would remain in place.

"Not only does any concurrent resolution need to come to the Governor for approval or disapproval, but the disaster declaration is separate from the orders signed by Secretary of Health Dr. Rachel Levine under the Disease Prevention Act that include provisions for business reopening and for worker and building safety," Wolf's office said in a press release. "Those orders remain in place. The legislature did nothing to end those."

However, on Wednesday, Republicans sent a different message as they gathered on the steps of the Capitol in Harrisburg.

"To all you business owners out there, the message we sent you last night was open your doors, mind your business," said Republican State Rep. Russ Diamond, of Lebanon County.

When Rep. Diamond was asked if the opposing messages from the GOP and the Governor on the resolution were leaving people in limbo, Russ said, "it does leave the residents of Pennsylvania in limbo. But, you know what, that's on the Governor."

General counsel Gregory Schwab joined the Governor at a press conference Wednesday to claim the debate over the resolution will need to be decided in court.

When the Governor was asked who people in Pennsylvania should be listening to right now, he said 'me.' But, he added that is also why he plans to take the issue to court to make sure the questions over where the constitutional rights lie are settled. He said as he understands it he would not even have the opportunity to veto the resolution because he claims as it is written, "it's not going to reach my desk."

"I don't know anywhere in the constitution that the General Assembly can unilaterally pass a law and put it into place," said Governor Wolf.

Schwab added the current state-issued guidelines will continue to stand in the state and have not changed, even with the resolution.

"Essentially the resolution that was passed last evening is meaningless," said Schwab.

However,  Rep. Diamond said "the Governor has a choice. He is mandated by law to sign a proclamation to reflect the resolution that we passed last night."

"We can never let this happen again and yesterday the House and Senate agreed by passing House Resolution 836," said Diamond.

Diamond later added, "he (the Governor) has a choice. He can continue down the road that some have called a dictator, or he can sign the proclamation."

OTHER ISSUES AT STAKE

Gov. Wolf said the disaster declaration helps speed up the state’s response to the pandemic and provides protections for businesses, workers and residents.

He added, if the disaster declaration is ended, it would ostensibly end protections with his office giving these examples of what would be impacted:

In addition to these immediate waiver and legislative enactments being removed, Wolf's office said in a press release, "ending the disaster declaration also would remove many practical aspects of the state’s response to this disaster, including the authority to activate the National Guard to help with nursing homes; deploying commonwealth personnel, services and distributing supplies and equipment; implementing emergency funding; suspending rules and regulations that would hinder or delay necessary action in coping with the emergency; and using all available resources of the commonwealth government and its political subdivisions to deal with the emergency."

The Governor's office claimed the state could also lose federal public and individual disaster assistance, and any additional state funding sources available through the transfer of unused General Fund dollars, according to Wolf.

The Governor's office added a state of emergency declared by the governor, commonwealth agencies and departments may implement their emergency assignments without regard to procedures required by other laws pertaining to performing their work, entering into contracts, purchasing supplies and equipment, and employing temporary workers.

But Republicans countered they are willing to work with the Governor to make sure any possible implications of ending the disaster declaration do not happen in Pennsylvania.