Northeastern graduate Jacob Moser, 18, was one of five people recognized by Fair Districts PA for his map design of future State House seats. 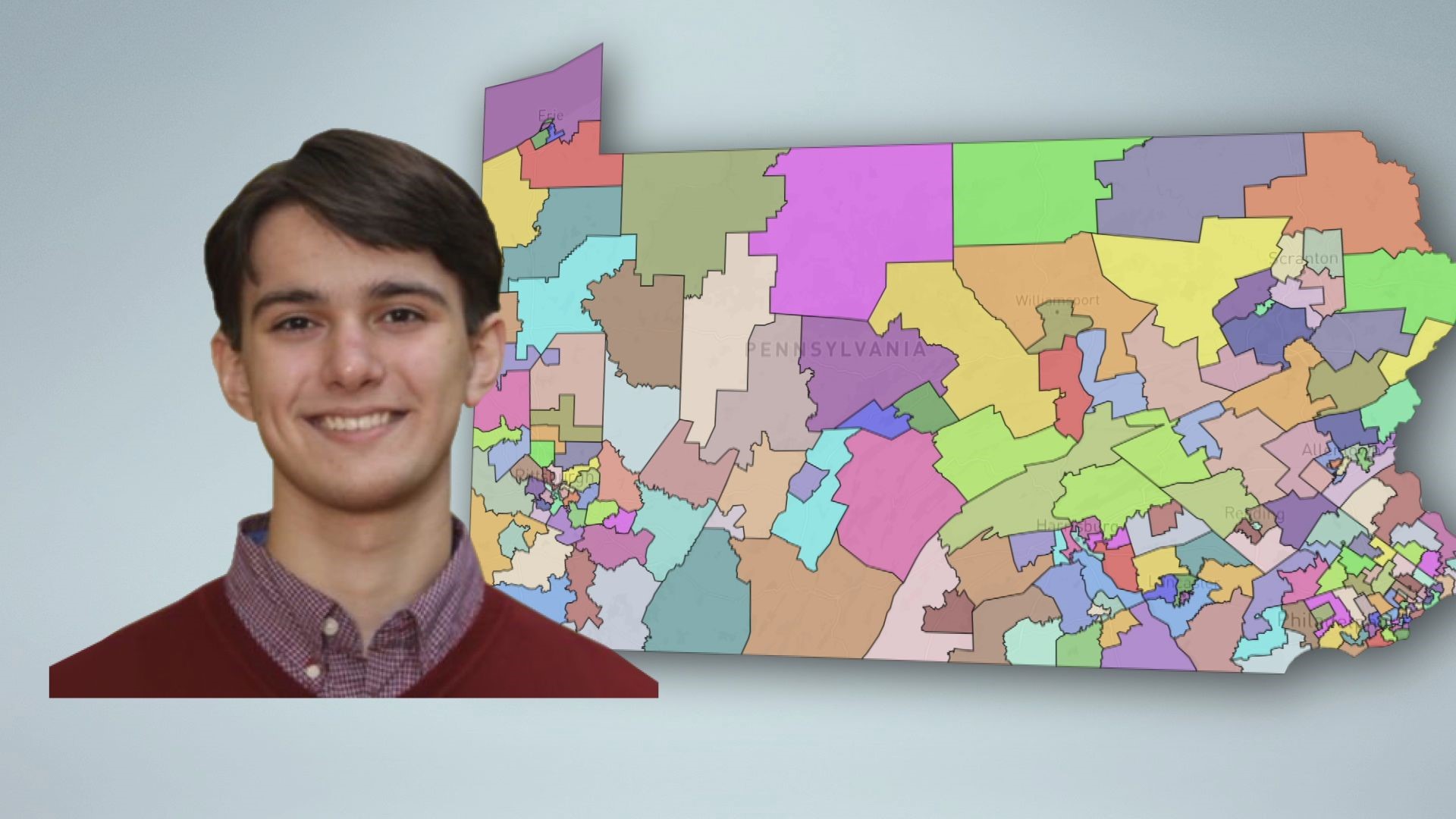 YORK COUNTY, Pa. — There are three "C"s when it comes to redrawing political district maps:

Are all parts of the district connected and not split apart? Is there a common geographic shape and people within the district live relatively near each other? Does a district's residents share similar social and economic values?

However, there's also a fourth "C" which seemingly affects everyone: Confusing.

The art of redrawing Congressional, State House, and State Senate Seats is a lot for even the most professional and experienced mapmaker to take in. Yet, every ten years, corresponding with the results of the U.S. Census, state lawmakers are tasked with redrawing Pennsylvania's political seats.

Can it be difficult to split 203 State House seats and 50 State Senate seats into even districts? Sure. Jacob Moser not only accepts the challenge. He embraces it, and passes with flying colors.

Moser, 18, is a Northeastern High School graduate in York County. Now a freshman at West Chester University majoring in political science, mapmaking combines two of his greatest passions: geography and politics. When he heard that redistricting watchdog group Fair Districts PA was inviting the amateur mappers to create their own district maps as part of a statewide competition, he jumped at the opportunity.

"For a lot of the country, maps are Gerrymandered for either party, and it made it so uncompetitive," Moser said.

Gerrymandering is the practice of making maps which give an unfair political advantage to one party over the other. Usually, this is done by manipulating the boundaries of a district so that it works around bordering communities.

The Pennsylvania Supreme Court ruled in 2018 that the commonwealth's Congressional districts were Gerrymandered by state Republicans, and redrew the maps themselves ahead of the 2018 Primary elections.

Moser says he started recognizing the inequality in some state legislative districts around the 2016 election.

For his winning map, Moser says his primary focus was the area he's most familiar with: York County. He managed to keep the county intact, without districts bleeding over into other counties. He also managed to keep the vast majority of municipalities together in the same district as well, though he admitted that is impossible to do for the entire state when having to fall within the population rules.

Each House district must have a population within 5 percent of 64,053 people, which is Pennsylvania's population divided by its 203 House seats.

"I tried to put areas I thought were pretty similar together," he said.

Moser's focus was on communities of interest -- keeping municipalities and counties intact -- and minority representation -- making sure communities with majority-minority residents could elect someone who best represents their values and interests.

"Jacob did a really nice job looking at partisan bias, looking at community splits, and keeping communities together," she said.

Credit: Jacob Moser
Sample of redistricting map of York County, drawn by 18-year-old Northeastern HS graduate Jacob Moser. He says he is most proud his map did not split his home county into other counties.

It's people like Jacob, she says, who give her confidence this round of redistricting will be more fair than in 2011, which resulted in multiple lawsuits.

The technology to draw maps has been available for state lawmakers and their map drawers to use for over a decade, Kuniholm says. The difference between then and now, she says, is that the same technology is available for the public to use.

"We can share maps in minutes and there will be thousands of people running tests, digging deep, and providing comments like, 'You did it again, you divided my community. Can you please fix that?'

"There are thousands of people across the state who understand what this looks like, and are ready to look at new maps as soon as they come out," Kuniholm said.

Nordenberg said at the LRC's most recent hearing they are awaiting final data from the state Department of Corrections on prison population, which will arrive no later than November 9. Senator Costa has said in the past he hopes to have maps drawn by early January, to give prosepctive candidates enough time to declare and campaign for the 2022 Midterm Primary Election.

Moser, like thousands of his mapmaking peers across the commonwealth, are anxiously awaiting those maps. In the meantime, his reward for winning the Fair Districts PA competition is $1,000 and the chance for his map to be considered by Fair Districts when they put together a composite map to submit for future Legislative Reapportionment Commission hearings.

"I'm really excited that my thoughts may actually be considered during the redistricting process," he said.