State House and Senate lines will be redrawn this year, along with Congressional lines, though experts do not anticipate much change from current set up. 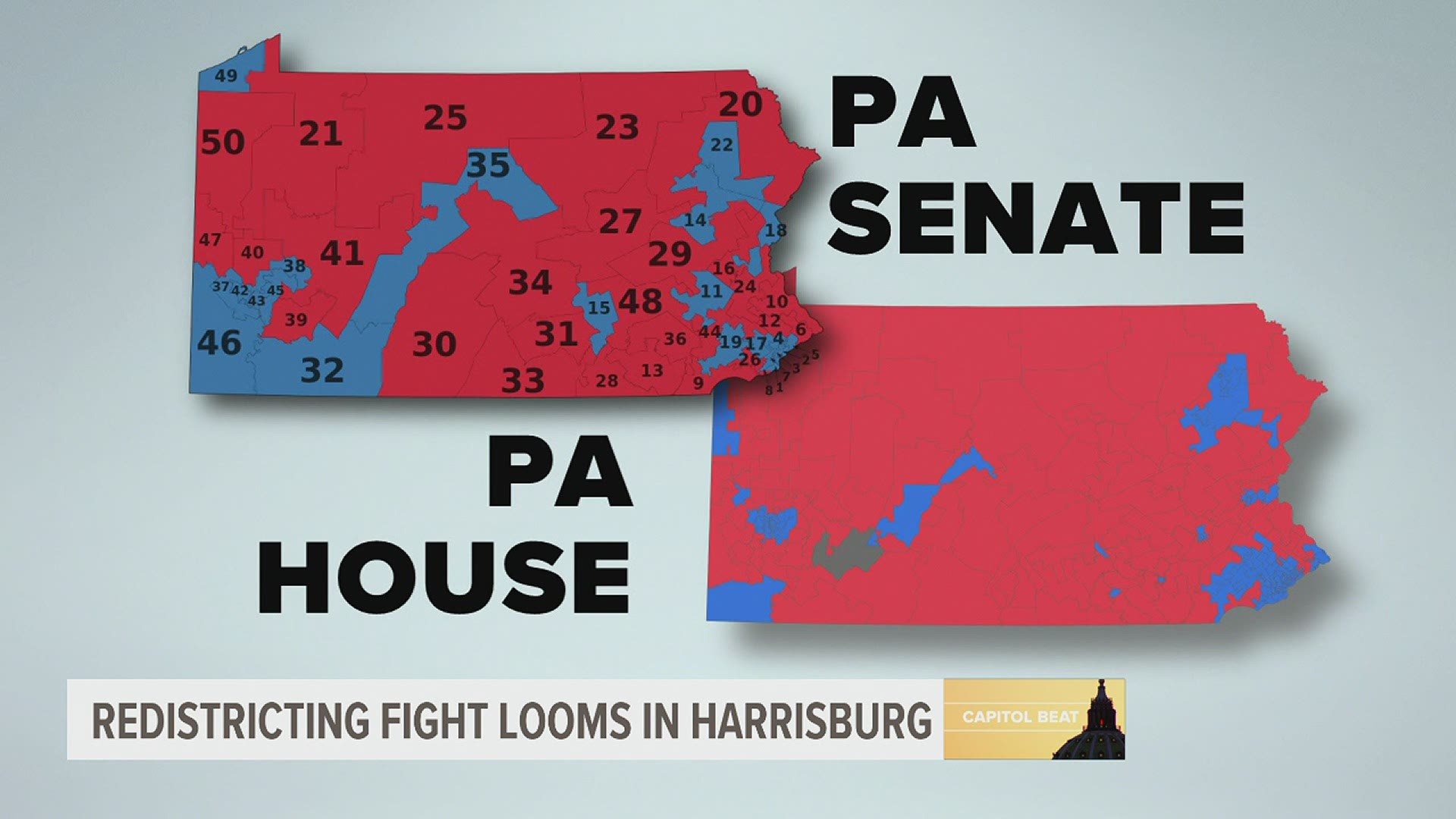 HARRISBURG, Pa. — Pennsylvania's next big political battle is about to play out at the State Capitol as the redistricting process looks different for the first time in 30 years, though experts wonder how much change will actually take place.

Every ten years, members of the commonwealth's legislature meet to redraw lines or State House, Senate, and Congressional districts. As it is written in the state's constitution, a five-person reapportionment committee will determine legislative lines, while the legislature will vote on Congress lines with approval from the governor.

The last two times district lines were drawn, Republicans held a trifecta of power in Harrisburg, controlling majorities in the House and Senate while also holding the governor's office. Republicans also held a majority on the State Supreme Court. This time, however, while Republicans continue to hold majorities in the General Assembly, Democrats hold two key positions of checks and balances, if not outright tiebreakers.

They will have to redraw Pennsylvania's 253 legislative districts; 203 in the House, 50 in the Senate, which will remain in place for the next decade.

The four appointed commissioners are Senate Majority Leader Kim Ward (R-Westmoreland), House Majority Leader Kerry Benninghoff (R-Mifflin), and Democratic Senate Leader Jay Costa (D-Allegheny), and House Leader Joanna McClinton (D-Philadelphia). They will have to mutually agree upon a fifth, non-partisan commissioner to serve as a tie-breaking voice. If they don't, the choice belongs to the State Supreme Court, now under Democrat control.

"There are Democrats who aren't eager for reform because they want to draw maps for themsevles," said Carol Kuniholm, head of the non-partisan redistricting reform group Fair Districts PA. "The Republicans have a chance to put better rules in place. Will they do that? We dont know, but we're certainly asking them to."

Democrats have not held control of the State House since 2010, and the State Senate not since 1992.

Kuniholm and Fair Districts have been pushing for an 11-person independent commission to redraw lines for the past few years. Since that is not an option anymore this cycle, she says her advocates are in the process of trying to meet with legislators in all 253 districts across Pennsylvania, in the hopes of convincing them to push for fair map drawings.

The legislature holds the key to redrawing Congressional lines, and Kuniholm is among those who hope Governor Tom Wolf holds the balance in Republicans power.

After Congressional lines were last drawn in 2012, numerous lawsuits alleging gerrymandering eventually led to lines being redrawn by the State Supreme Court in January 2018. Prior to the new maps, Republicans held a 13-5 edge in Pennsylvania Congressional seats. Following the 2018 Midterms, and still today, the commonwealth's Congressional power is split, with eight Republicans and eight Democrats.

"When you get Goofy kicking Donald and it's nationally known, it's embarassing and you cant do that again," Kuniholm said.

She is referring to the former 7th Congressional District outside of Philadelphia, which encompassed five counties and was drawn in a way that the Washington Post once referred to it as a picture of Disney characters Goofy kicking Donald Duck. State Republicans will still draw the lines this year, though many are hoping there is more of an effort to include Democrats in the decision-making process because any bill must get signed by Governor Wolf.

"They're not going to give the governor a bill that he's going to veto, because if he vetoes a bill, it comes right back to House and Senate and we're going to have to do it over again," said State Senator Lisa Boscola (D-Lehigh). "I think there's going to be more compromise than ever before."