All eligible voters will have a chance to weigh in on four issues which will be featured on the May 18 primary election. 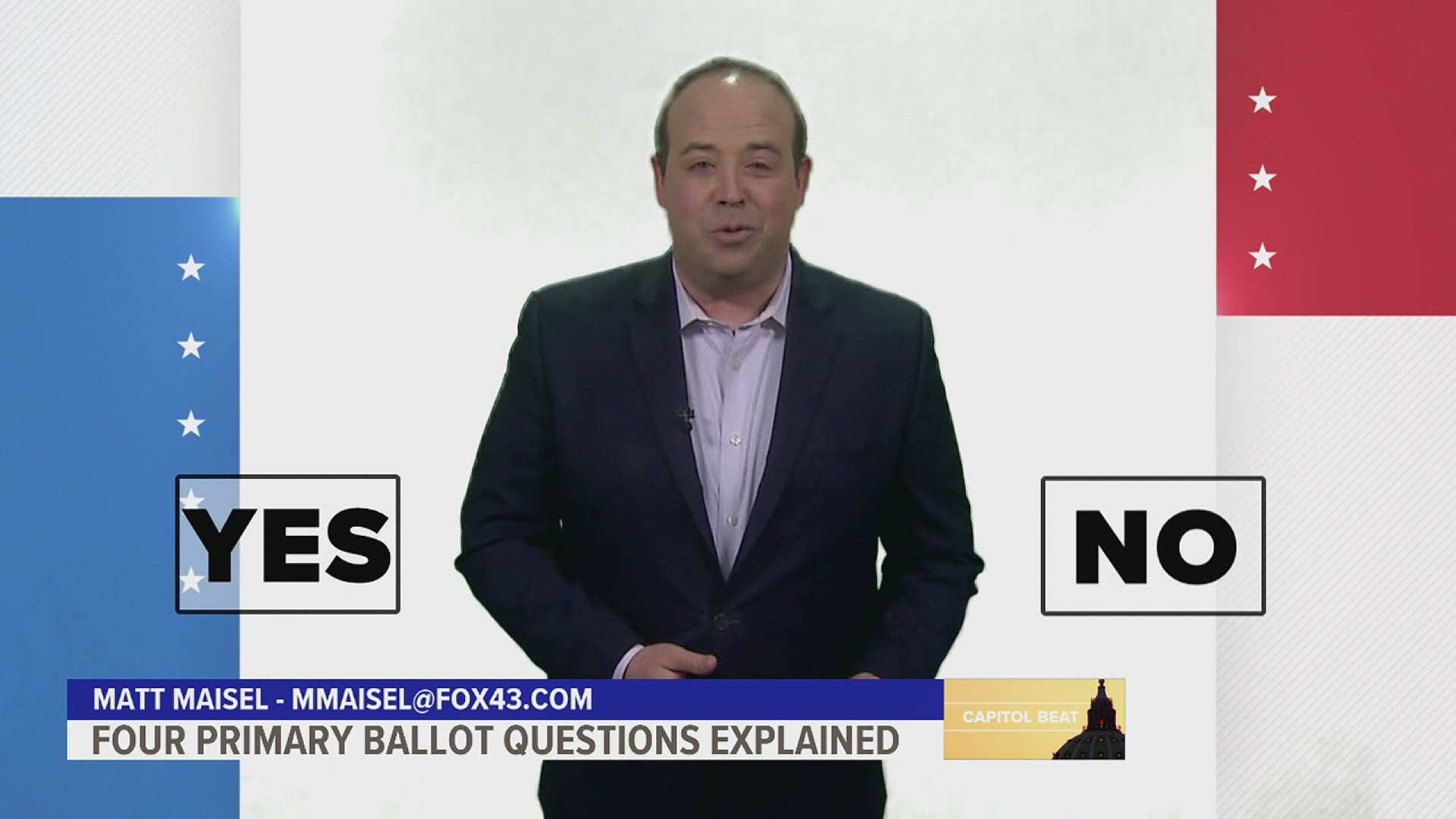 HARRISBURG, Pa. — All eligible voters in Pennsylvania, including registered Independents and other small-party members, will have the opportunity to vote in the May 18 primary election. What is normally a closed election for only Democrats and Republicans is open for everyone because of four questions which will appear on the ballot.

Two of the questions are uncontroversial. The other two have been the cause of deep debate in the state legislature for the last 13 months as the commonwealth rebounds from the coronavirus pandemic. FOX43 is breaking down all four questions for you, including the language you will see on the ballot and what each question ultimately means.

What you'll see on the ballot:
Do you favor expanding the use of the indebtedness authorized under the referendum for loans to volunteer fire companies, volunteer ambulance services and volunteer rescue squads under 35 PA.C.S. §7378.1 (related to referendum for additional indebtedness) to include loans to municipal fire departments or companies that provide services through paid personnel and emergency medical services companies for the purpose of establishing and modernizing facilities to house apparatus equipment, ambulances and rescue vehicles, and for purchasing apparatus equipment, ambulances and rescue vehicles, protective and communications equipment and any other accessory equipment necessary for the proper performance of the duties of the fire companies and emergency medical services companies?

What it means:
This question, mired in legal jargon and extra words, essentially comes down to its first sentence: Do you favor allowing municipal fire companies, ambulance services, and rescue squads to use loans which are usually only allowed for volunteer companies? The measure is not controversial; it passed unanimously out of the general assembly. Money from the loans would be used towards new equipment.

What you'll see on the ballot:
Shall the Pennsylvania Constitution be amended to change existing law and increase the power of the General Assembly to unilaterally terminate or extend a disaster emergency declaration—and the powers of Commonwealth agencies to address the disaster regardless of its severity pursuant to that declaration—through passing a concurrent resolution by simple majority, thereby removing the existing check and balance of presenting a resolution to the Governor for approval or disapproval?

What it means:
Currently, only the governor can extend or eliminate an emergency disaster declaration. Disaster declarations enable states to increase support for high-need areas, and make them eligible to receive federal funding. On March 6, 2020, Governor Tom Wolf signed a disaster declaration, which has been summarily extended every 90 days since, much to the consternation of state Republicans, who believe the governor has abused a unilateral power to decide how the state operates. Governor Wolf has been adament that the COVID-19 pandemic is not over, and that the disaster declaration helps maintain Pennsylvania's vigilence.

Republicans have tried to overrule the governor on the issue, though the State Supreme Court ruled Wolf, as the commonwealth's chief executive, has the final say in those matters. The legislature can also overrule Wolf with a two-thirds majority vote. Voting "YES" on this constitutional amendment woud hand the power to extend or terminate a disaster declaration with the state legislature, while a "NO" vote would keep those powers with the governor.

What it means:
Pennsylvania Republicans believe the current 90-day disaster declaration is too broad and too restrictive. They want to change it to 21 days. This constitutional amendment would also only allow the legislature to continue the emergency. If the governor wants to implement a new disaster declaration, he or she could not do so under similar circumstances.

What you'll see on the ballot:
Shall the Pennsylvania Constitution be amended by adding a new section providing that equality of rights under the law shall not be denied or abridged because of an individual’s race or ethnicity?

What it means:
Pennsylvania already has some legal protections in place for discrimination based on race and ethnicity. This constitutional amendment serves to enshrine them in the state's constitution and is supported by Democratic and Republican lawmakers.

Voting "YES" prohibits any form of Pennsylvania government, its entities, and institutions from discriminating against people based off their race or ethnicity and enshrines it within the commonwealth's constitution. Voting "NO" does not change anything, because current state and federal laws, under the Equal Protection Clause of the U.S. Constitution, already provide protections from discrimination on all levels.