Early voting is well underway in Pennsylvania. Of the state’s 9 million registered voters, 1.7 million have already mailed or turned in their ballots. 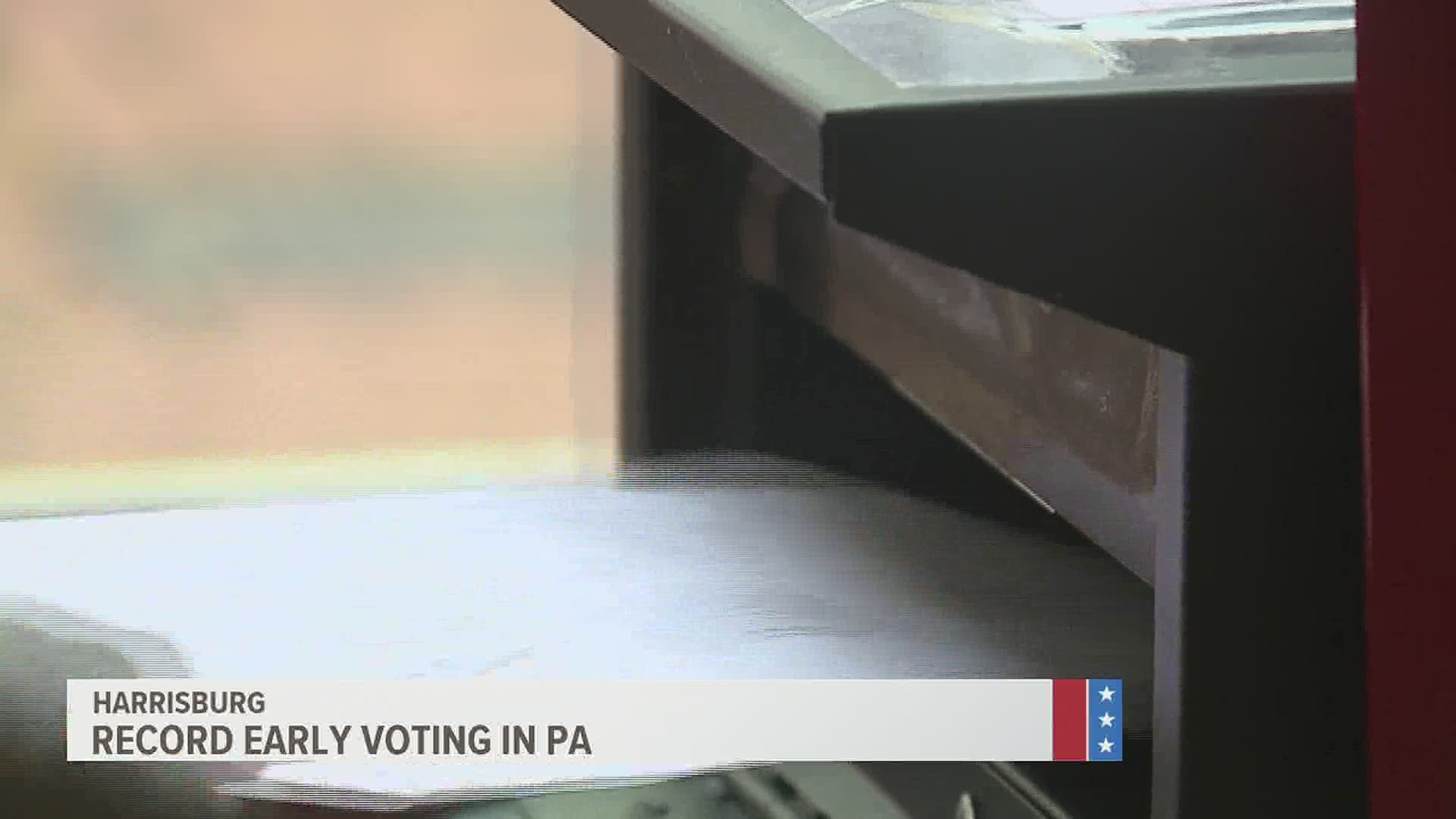 HARRISBURG, Pa. — Early voting is well underway in Pennsylvania. Of the state’s 9 million registered voters, 1.7 million—or about one fifth—have already mailed or turned in their ballots to county election offices, according to the Pennsylvania Department of State.

The state is now seeing record turnout for early voting via those mail-in ballots.

Pennsylvania provided only absentee ballots—which require an excuse as to why the voter can’t appear at their polling place on Election Day—until no-excuse mail-in ballots were legalized in October 2019.

“It's just such an incredible change. In 2016, there were 266,206 absentee cast statewide,” Secretary of the Commonwealth Kathy Boockvar said in a press meeting on Oct. 23.

RELATED: People wait in line for hours to vote early in Luzerne County

Over the weekend, Pennsylvania passed the halfway mark of mail-in ballots returned, according to the U.S. Elections Project. As of Oct. 26, 56.7 percent of ballots requested had been returned.

A pandemic and a sharply contested election have spurred many voters to avoid the polls on Election Day.

“I'm just concerned about the coronavirus,” said Harrisburg resident Debra Buchanan, who had placed her ballot in an office ballot drop box outside the Dauphin County Administration Building.

“It just made me feel better knowing I'm putting it in the ballot and it's there,” said Gabrielle Dixon of Hershey, who also voted via mail-in ballot.

With eight days left of early voting, officials are urging voters to return their mail-in ballots as quickly as possible.

“Once you get you get your ballot, do not wait in casting that ballot,” Boockvar said.

The deadline to apply for a mail-in ballot is Oct. 27.

Ballots can be returned in person until 8 p.m. Nov. 3.

If mailed, ballots must be postmarked by 8 p.m. Nov. 3 and received by the county election office by 5 p.m. Nov. 6.

Those who miss the deadline to request a mail-in ballot can still vote in-person on Election Day.

Lancaster Votes, a collaboration of 27 agencies to get out the vote, recommended heading to the polls early.

“Don't wait until 6 p.m. and then say, ‘I think I'll mosey down to vote’. Make a plan,” said Stacey Blake, CEO of YWCA Lancaster, which is part of Lancaster Votes. “What time are you going to go? How are you going to get there? Who are you taking with you? To make sure you have plenty of time to vote with no problems.”