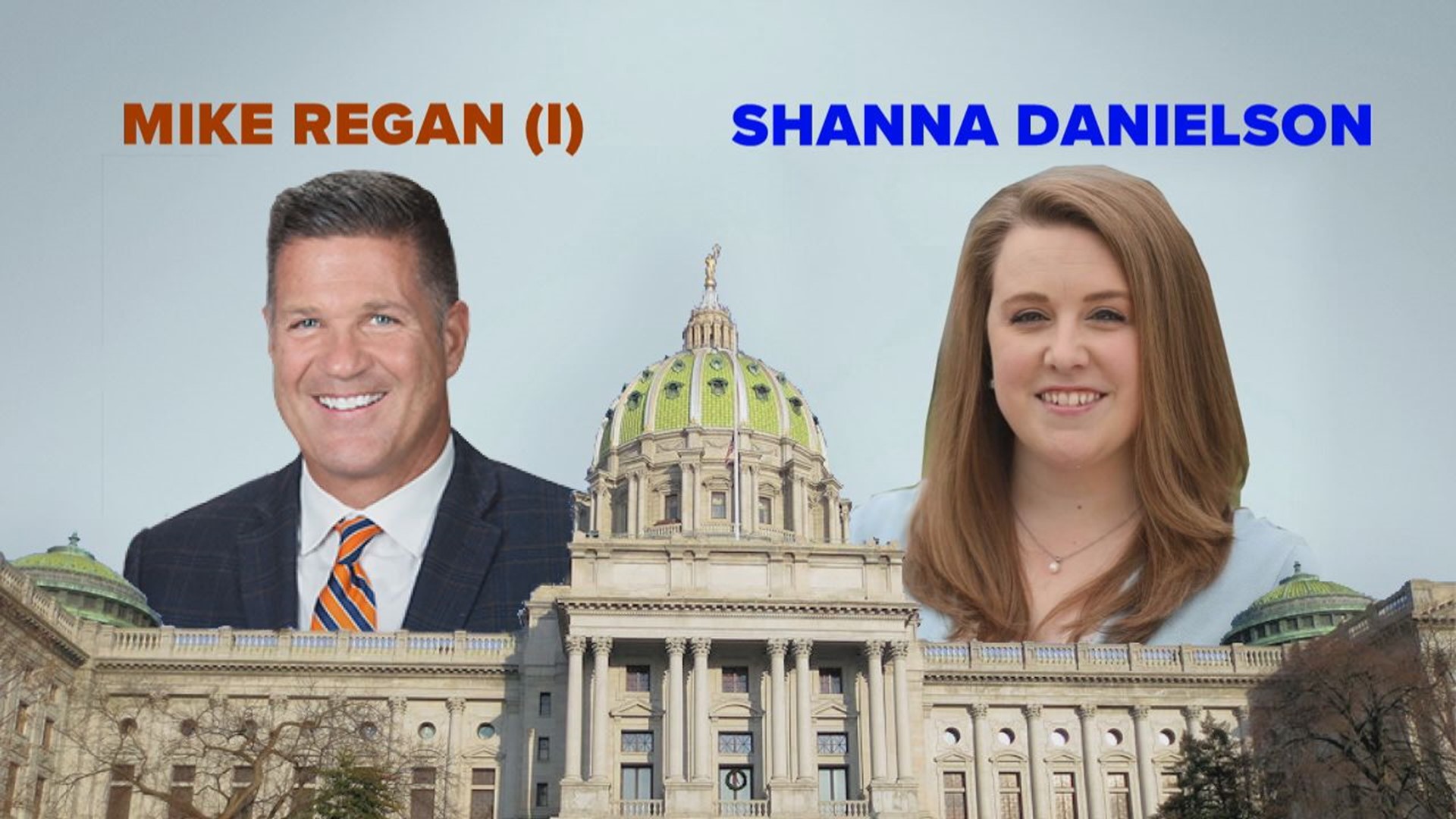 In the race for the Pennsylvania State Senate seat in the 31st District, Republican incumbent Mike Regan is seeking a second term against northern York County Democrat Shanna Danielson.

Regan is former U.S. Marshal, who won the seat in 2016 after serving two terms in the State House. Danielson is a music teacher in the East Pennsboro School District.

SENATOR MIKE REGAN: When I ran for state senator four short years ago, I asked for the support of local residents and pledged to protect our communities, our families, and our tax dollars.

Working together with my constituents and like-minded legislators, I’ve fought every day to do just that. I am running to build on our legislative successes and to continue providing the residents of Cumberland and York Counties with a strong voice because I know there is more to be done, especially as we recover from the pandemic.

SHANNA DANIELSON: I'm running for state senate to bring the voice of an educator, a working mom, and an advocate to the capitol. Too many people in our communities are struggling. We need a State Senator who will stand up to the powerful and fight for the majority of Pennsylvanians, not just those at the top.

SENATOR REGAN: The number one goal of government is to make sure that our citizenry is safe. I introduced and crafted legislation to make our schools safer than they have ever been before. We have provided over $200 million additional dollars to our public school systems to make sure they have the resources they need to keep our children, teachers, and communities safe.

DANIELSON: As an educator, I am passionate about the vital role our public schools play in our commonwealth. I've taught in three school districts in Pennsylvania, and the disparities between districts are astounding. Your zip code should not determine your potential. We need to fund our schools equitably, take the burden away from homeowners by having the state pay its fair share, and reduce the over-reliance on standardized testing so our teachers can teach and our students can learn.

Fight to reduce the number of veteran suicides

SENATOR REGAN: When the COVID-19 pandemic hit the United States in March of this year, our nation was not ready for the likes of a virus not seen since the Spanish Flu. I worked every day to safely reopen our state so that Pennsylvanians could resume their lives and livelihoods. I believe we need to make sure that our schools, businesses, and healthcare systems have the tools and resources they need to recover from this pandemic.

DANIELSON: The recovery from the impact of COVID-19 will be the biggest challenge Pennsylvanians face in the next two years, alongside an impending environmental crisis from climate change.

SENATOR REGAN: As Chairman of the Veterans Affairs and Emergency Preparedness Committee, I witnessed firsthand the overreach of the Executive Branch of our government. Our Governor should have solicited advice and counsel from the General Assembly throughout the crisis, and worked across party lines to build consensus and buy-in from the legislature, a co-equal branch of our government. The General Assembly has continued to operate in a bi-partisan fashion to deliver aid to frontline workers, hospitals, and schools during the pandemic. As we return to session in Harrisburg, I plan to work with like-minded legislators to strengthen laws that will ensure that proper checks and balances are in place, and to prevent a future executive from wielding unilateral power and control. No governor should have the singular authority to govern without legislative oversight like our governor has done and continues to do. In America, we are a government of the people, by the people, and for the people. And a never-ending declaration of emergency should never be permitted to nullify our Constitutional freedoms and rights.

DANIELSON: The legislature needs to put a strong focus on allocating the rest of our CAREs Act funding so that struggling Pennsylvanians get relief. We need to ensure that childcare centers can stay open safely and that our schools have what they need to make the best decisions for their students' learning. We must prioritize mitigation because until we get a better handle on the virus's spread, the virus will continue to disrupt our economy.

SENATOR REGAN: See question 5 answer. Additionally, I think one needs to take in the full landscape before ushering such an opinion, and I would have to disagree. The Governor’s administration knowingly sent COVID positive patients into nursing homes and they were cordoned off resulting in the deaths of thousands of our seniors across the state. These deaths could have been prevented had better decisions been made in key leadership positions – Pennsylvania was only one of 5 states in the country that did this.

DANIELSON: It's always easier to look back at crisis response and critique than to make the decisions at the moment. When dealing with a novel virus that we still don't entirely understand, I believe that caution for the sake of saving lives will always be the right call. Now that we know more about the virus, we should adapt our response based on health experts' new findings. The state legislature needs to allocate the remaining $1.3 billion in CAREs funding to help our citizens and businesses. We need to enforce mask-wearing so that more of our businesses can reopen. Lastly, hardworking Pennsylvanians all across our commonwealth need our lawmakers to come together and work to get us out of this pandemic stronger than we were before.

SENATOR REGAN: Pennsylvania does not have a tax friendly environment when it comes to supporting our businesses. We have the second highest Corporate Net Income tax in the country. Overburdensome regulations have kept major employers from coming to Pennsylvania, such as BMW, Amazon, Airbus, and many others due to this poor economic policy. We have seen neighboring states benefit from such employers and industries with their less onerous regulatory environments. Reducing the CNI, building out our infrastructure, continuing record level of education funding, and enhancing broadband access would all contribute to improving the health of our economy.

DANIELSON: The legislature needs to focus on issues that impact working families, especially during an economic crisis. Our legislature has yet to allocate 1.3 billion dollars of remaining CAREs Act funding. The legislature must act on this immediately to provide our community assistance. There are countless other programs (help with utility bills, rent and mortgage assistance, arts and cultural institutions, hospitality/bars and restaurants, childcare centers) that we need to fund. Also, it's time we raised the minimum wage, which would give millions of workers a boost in a time when they need it most. Many parents cannot go back to work because they can't find quality childcare for their children- this is incredibly difficult as we navigate virtual schooling and children who have typically aged out of traditional childcare centers. We should be making investments in our infrastructure and green energy, creating new jobs, and tackling the climate crisis simultaneously.

8. Social unrest has played out in front of us as citizens protest the killings of George Floyd, Breonna Taylor, and other Black men and women. What changes are needed to state laws as it relates to criminal justice reform?

SENATOR REGAN: I served for nearly a quarter century in the United States Marshals Service, and I reject the notion that there is systemic racism amongst the fine men and women of law enforcement who wear the uniform to keep us safe. Pennsylvania did not standby idly and watch as these tragic deaths took place. We instituted several changes regarding use of force, boosted training and education for officers, and will continue to review the matters of policing. I was recently appointed to the Municipal Police Officer Education and Training Commission where I look forward to making sure that Pennsylvania’s police departments have the best candidate screening and hiring processes and the latest and most up to date training available to them.

DANIELSON: We need to enact reforms that make our justice system more just for ALL Pennsylvanians. It's time to ensure that rehabilitation and safety are at the heart of our criminal justice system. We need stronger laws around civil asset forfeiture. It's time to ban chokeholds and enact more robust policies that regulate use-of-force incidents. But ultimately, we need to listen to our communities as they cry out for reform, and recognize that we are asking law enforcement to do too much. Let's work to strengthen and fund treatment facilities, mental health services, and community programs to relieve police officers' burden and simultaneously provide crime-prevention resources to our community.

SENATOR REGAN: After Governor Wolf’s unilateral shutdown, we saw the unemployment rolls skyrocket under his administration and over 2.1 million cases have been filed with the PA Department of Labor & Industry. I still have constituents that have yet to receive any form of unemployment compensation and that is completely unacceptable. The General Assembly has provided millions of dollars to make technological upgrades to the software behind the UC system. This should have been upgraded by the current administration, however, it was not and Pennsylvanians have suffered.

DANIELSON: The system is in dire need of modernization, scheduled to occur this fall but now must wait as they continue to navigate claims due to this pandemic.While staffing levels have increased to meet our economic crisis's demands, I hope that they will remain higher than they were in January as we transition to the new online system.

SENATOR REGAN: As it pertains to Pennsylvania, and particularly the counties which I represent, Cumberland and York, I believe that our Commonwealth is well prepared for November’s election. However, we have seen irregularities in voting in the past in our major cities such as Philadelphia and Pittsburgh, it is my hope that honesty and integrity prevails.

DANIELSON: Yes. I believe that our poll workers, county boards of election, and the people of our commonwealth all want this process to run smoothly. There are certainly fixes to Act 77 that are needed, and we may not have results right away, but people should feel confident when they cast their ballot that the process will work as intended.