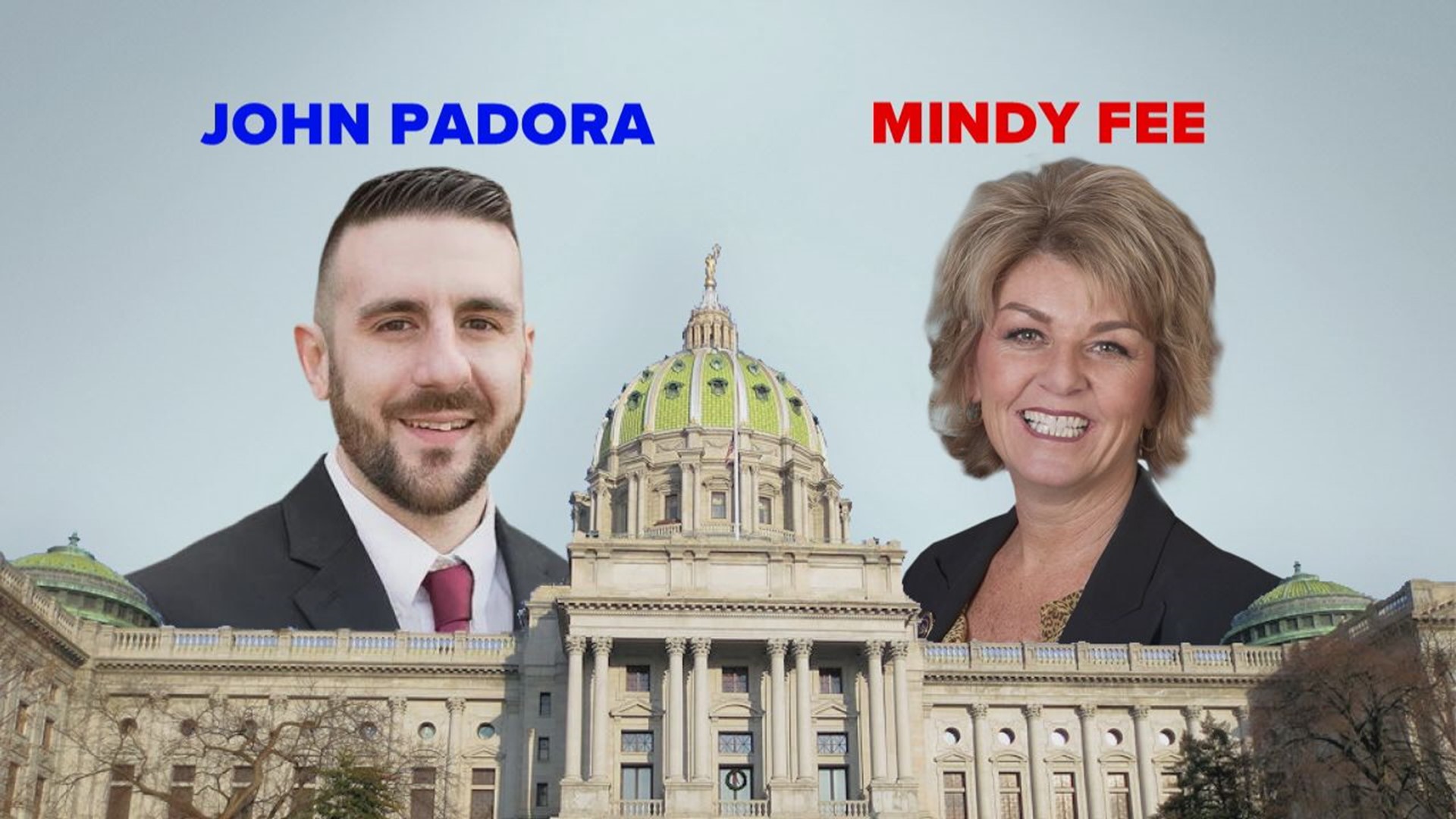 Democracy 2020 takes a look at the State House race for the 37th District.

This Northern Lancaster County seat has been held by Republican Mindy Fee since 2013.

She is seeking a fifth term against Democrat John Padora.

Fee has lived in Manheim most her life. She is a graduate of Manheim Central School District and Millersville University.

Fee says property tax reform is her top priority if re-elected. She also wants to make sure there's no tax increase in the next state budget. Fee also wants to promote conservative values in House leadership, and is against abortion and same-sex marriage.

John Padora is an Octorara School District grad with a background in environmental science. He is open about a past addiction and his recovery from opioids. John tells FOX43 legalizing marijuana is a top priority in his first term. He also wants to offer a public buy-in for Medicaid and reform property tax.

Read more from the candidates in their own words by visiting the Election Voting Guide.

Both Representative Fee and Mr. Padora returned questionnaires to FOX43.

Why do you want to represent your district?

REPRESENTATIVE MINDY FEE: I’m running for re-election because I understand the values and priorities of the majority of people who live in my district. I take my job very seriously to actually represent and advocate for those priorities with legislation under consideration in the Pennsylvania Legislature. Additionally, my staff and I truly get to help people dealing with state-related issues, help them cut through the government’s red tape, and actually solve problems. That’s a privilege that comes with this job, and it’s one I do not take lightly.

JOHN PADORA: I love Northern Lancaster county - we have a rich culture here that permeates our way of life. I want to represent the 37th district with a strong commitment to community engagement & equal representation in Harrisburg. Our current State Rep. is a ghost within the community & only makes efforts to appeal to those in which she is politically aligned with. We have a leadership vacuum and the people of Northern Lancaster County are looking for real leadership that will restore the power to the people.

What area of public policy are you most passionate about and why?

REP. FEE: I’m extremely committed to dealing with waste, fraud, and abuse in state government. I’m acutely aware that every tax dollar the government has is one that’s come out of the bank account of the hard-working people of Pennsylvania.

I’ve been a key player in a few bills that have greatly improved the Pennsylvania Inspector General office's effectiveness, who is the key watchdog for dealing with fraud and tax dollar waste and abuse. I have also been a strong proponent of new legislation and approaches to reduce welfare fraud. Anything that can be done to promote accountability in how tax dollars are used does good for the people of Pennsylvania.

PADORA: I am very passionate about environmental reform, combating the opioid/addiction epidemic. I have a background in environmental science & a strong understanding of how human caused climate change is threatening our children’s and grandchildren’s future. I am also an individual in long-term recovery from opioid addiction. My addiction to opioids almost cost me everything -even my life. I have watched friends and family members die & our community suffer from the fallout. We need lawmakers in Harrisburg who have lived through hardships to help solve our deeply rooted issues.

Name three goals you wish to accomplish in the next term if elected?

REP. FEE: a) Property tax reform. Pennsylvania is an incredibly diverse state, both politically and in how school property taxes are structured. Property owners in Lancaster County and our surrounding counties are paying property taxes under a very different structure than owners in places like Forest County or Westmoreland County. Thus, the impetus to fix property taxes falls more along geographic lines than party lines. And with many regions of the state quite happy with their property tax assessment, the political will to change is far smaller than most would think. I’ve co-sponsored and supported several property tax restructuring plans (including property tax elimination) that would make the process more equitable across the state. I’m not giving up on this fight.

b) Balanced state budget with no tax increase. With state revenues down so sharply from the COVID-19 pandemic, Pennsylvania’s state budget (at the moment) is facing an approximate shortfall of $5 billion. This is a staggering number. We simply must find ways to safely get our state economy roaring back to life so that revenues can be generated in a more typical fashion, and we do not have to raise taxes to put an even larger financial burden on our citizens.

c) Ensuring that our House leadership team is comprised of people who support conservative principles. Legislative leaders make the decisions about what state issues are tackled and which ones never see the light of day. I’m incredibly proud that the new Speaker of the House is Lancaster County’s own Bryan Cutler. Many of our other leaders hail from central Pennsylvania as well. By working to elect and support House leaders who have principles that align with the people I represent, I’m hopeful that more issues that matter to northern Lancaster County will be at the forefront of the Legislature’s work.

What is the biggest challenge facing Pennsylvanians in the next couple years?

REP. FEE: We need to focus much effort on bringing Pennsylvania’s economy back to life while keeping people safe. Getting our businesses safely back to a more normal operating level will help the millions of Pennsylvanians who are depending on unemployment payments for the first time in their lives, will reduce the strain on the state’s unemployment compensation system, will simply help to reduce the anxiety that our citizens are facing about their family’s financial future, and help the state address the current $5 billion shortfall in the state budget. President Trump got our nation’s economy to reach levels of success that have never been seen before. I’m hopeful with his re-election and with wise fiscal management on the part of the Pennsylvania government, our businesses will be able to safely churn back to life, and incoming revenues will address these issues in a proper fashion.

PADORA: Partisan gridlock and a legislative body that advocates exclusively for the corporations - not the working class.

COVID-19 will continue to be a part of our lives in 2021 and beyond. What should Pennsylvania’s top priorities be as it relates to the pandemic?

REP. FEE: Pennsylvania’s top two priorities in this ongoing effort should be keeping our seniors and our other most vulnerable citizens safe and rebuilding our economy.

PADORA: To ensure the safety & economic well being of our residents during times of hardship.

Dr. Deborah Birx of the White House’s Coronavirus Task Force praised Pennsylvania for how it has handled the COVID-19 pandemic. How would you assess the commonwealth’s response?

REP. FEE: Pennsylvanians were tasked with doing all they can to flatten the curve. And our citizens made a tremendous response in that effort. Our hospitals have never come close to being overwhelmed, and so many people are learning what’s necessary to keep themselves and those around them safe. But initial and now ongoing restrictions that are keeping businesses closed and the governor offering waivers for “life-sustaining businesses” was and are very troubling. One of many, many examples of problems faced by my constituents came early this spring. A family wanted to hire a private contractor so they could make their bathroom ADA compliant in order to bring a loved one home from a nursing home. One worker, working safely in a home, so that the family could have peace of mind that their loved one would be safe. I made call after call and was denied at every turn. So many businesses could have been given the chance to safely re-open, but instead have been faced with so many restrictions that – if they have been able to recover – they’re struggling.

PADORA: I believe that the Governor as a whole has done an excellent job in mitigating the spread of COVID-19. There were however some aspects I disagreed with. I think that our Republican dominated legislature failed Pennsylvanain’s by ignoring the advice of medical experts and choosing to prioritize legislation that overrides the Governor's executive orders. They should have spent their session days passing relief bills that would have bailed out small businesses and worked together in a cohesive manner. What we have witnessed this year was the worst example of partisan gridlock in our state’s history.

What needs to be done in order to improve Pennsylvania’s economy?

REP. FEE: Let our businesses show the innovation that I know they have to be able to safely and fully reopen, and let our people go back to work!

PADORA: We need to make the wealthy corporations pay their fair share of taxes, raise the minimum wage, lower the price of healthcare, legalize and tax marijauna sales, & pass a green energy initiative that will create tens of thousands of good paying jobs.

Social unrest has played out in front of us as citizens protest the killings of George Floyd, Breonna Taylor, and other Black men and women. What changes are needed to state laws as it relates to criminal justice reform?

PADORA: Racial disparities & systemic failures need addressed. Police should have to reside in the communities in which they police. Too many officers live outside of the cities they patrol and have a disconnect to the community as a whole.

What changes would you make to Pennsylvania’s unemployment compensation system?

REP. FEE: Well, the biggest change I would make would be to simply make it work for our citizens. And there’s one major step that would serve as an incredible diffuser of problems: improved communication. All the people want is to be able to communicate and know where they are in the process. Instead, they sit and dial the number hundreds and hundreds of times a day simply trying to connect. Even my office has been shut down with communication. I have no legislative inroad that gets any better service – much to the chagrin of the hundreds of constituents who have reached out to me for help. I’m permitted to fill out a form with constituent info and submit to L&I… and then they can expect to receive a call on the issue sometime within four weeks. This type of continued unresponsiveness is unacceptable! I understand the unprecedented number of applicants, but L & I has now had months and months to hire and train additional people.

PADORA: Increase the funding to ensure that enough employees are available to process an influx of unemployment claims - even during times of seemingly economic prosperity. We cannot let our guards down. We need to convene an independent group to analyze the failures of the system and make suggestions to the general assembly.

Are you confident in the security and results of this election?

REP. FEE: If the laws that we have in place to ensure free and fair elections are followed, then we’ll be OK. I’m hopeful that the U.S. Supreme Court, though, will overturn the Wolf Administration’s addition of three extra days for ballots to be returned after Election Day.

PADORA: I have my doubts about the security and results of this election. I have witnessed vote tampering even here on a local level & acts of voter suppression or intimidation. I do believe that our vote by mail system is safe but I believe our entire security and protocols should be reassessed.