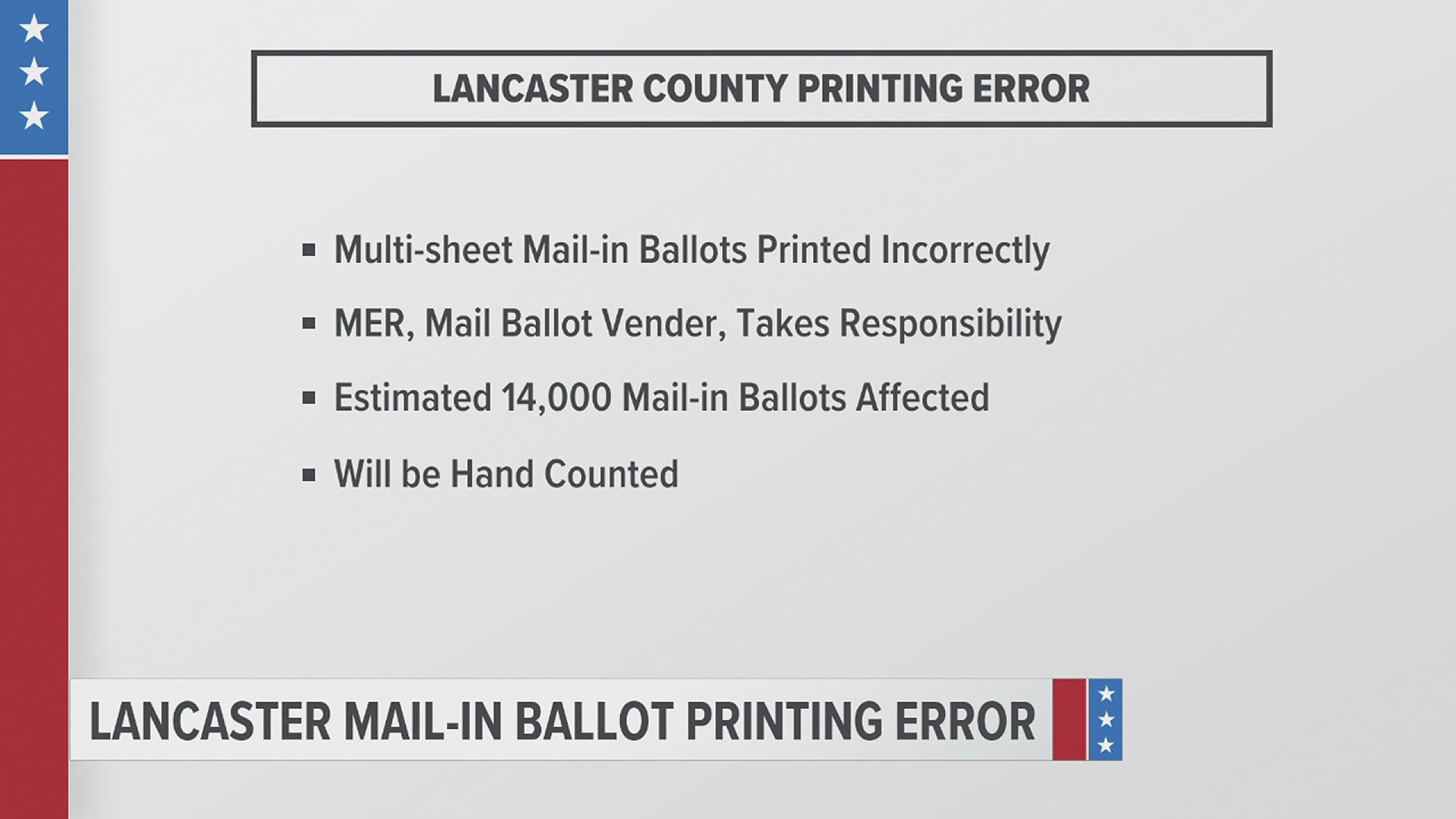 LANCASTER COUNTY, Pa. — Update Friday 4 p.m.:  The re-marking of 14,000 ballots began Friday morning in Lancaster County. The ballots had to be re-marked after a printing error resulted in multi-sheet ballots being out of order.

At the Board of Elections meeting, officials said, thankfully, the machines that read the ballots caught the issue which means no votes were incorrectly counted.

During the meeting, Commissioner Josh Parsons sounded off about the changes in PA's election law, which he believes will result in even more frequent issues.

"The standards for elections should be perfection, but let's be clear: The logistics of these elections are now so complicated, the deadlines so difficult, the rules so inconsistently applied by the Pennsylvania Department of State, there will continue to be problems across Pennsylvania. Something is likely to happen with every election in some counties," said Commissioner Parsons.

Commissioner Parsons referred to Act 77, which Governor Wolf signed into law in 2019. The law created the option to vote by mail 50 days before an election and for people to be placed on a list to permanently receive a ballot application by mail. It also authorized a $90 million bond to help counties fund the purchase of new voting systems with a paper trail.

"There are certain things about Act 77 that are here to stay. I think mail-in balloting is here to stay, and we can complain about it as much as we want, but our job as county officials is to figure out how to make it work, and I think we can do that," commented Commissioner Lehman.

Both republican and democratic poll watchers are watching the re-mark process.

It's expected to continue through Sunday.

Previously: The Lancaster County Board of Elections announced Tuesday afternoon that it discovered a printing error on the multi-sheet mail-in ballots that causes issues with their ability to be scanned.

The issue affects an estimated mail-in 14,000 ballots, the Board of Elections said.

No issues have been reported at any polling places across the county, according to the Board of Elections.

"While opening mail ballots today during the pre-canvass process, it was noticed that the multi-sheet ballots were printed in the wrong order," the Board of Elections said. "Multi-sheet ballots contain both candidates, and the Constitutional and referendum questions.

"The mail ballot vendor, MER, mistakenly printed pages 1 and 3 on the front and back of the same sheet, as well as pages 2 and 4, so if read in sequence, the pages would read 1,3,2,4.

"The scanners are set up to scan the pages in page order sequence with pages 1 and 2 on the same sheet as well as pages 3 and 4, therefore the scanner will not read these ballots."

Ballots printed on one sheet are able to be scanned and therefore not affected, according to the Board of Elections.

Those ballots that do not scan properly will be set aside and counted by hand in the presence of poll watchers, the Board of Elections said.

"(We) will continue to use processes in place to ensure the integrity of the ballots and the vote count," the Board of Elections said. "All ballots will be run through the scanners. The ballots that do not scan properly will be set aside and secured for hand counting.  The process used successfully in the past for hand counts will be utilized to finish the count and canvass.

"During the hand count process, poll watchers will be permitted to observe. Election results from the polling places and the mail ballots that are able to be scanned today will be posted this evening after the polls close.

"We will also provide updates on the number of ballots affected by the vendor error, including an estimated timeline for the hand count process."

The Board of Elections said it will "look at all appropriate means" to held MER accountable for the printing errors.

"We are extremely frustrated and find these issues to be wholly unacceptable," the Board of Elections said. "The County appreciates the staff and volunteers who have had to contend with these issues, thus maintaining the integrity of the voting process, which is of paramount importance."