Two of the four questions on the May 18 primary election ballot address the governor’s emergency declaration powers, a contentious issue amid the pandemic. 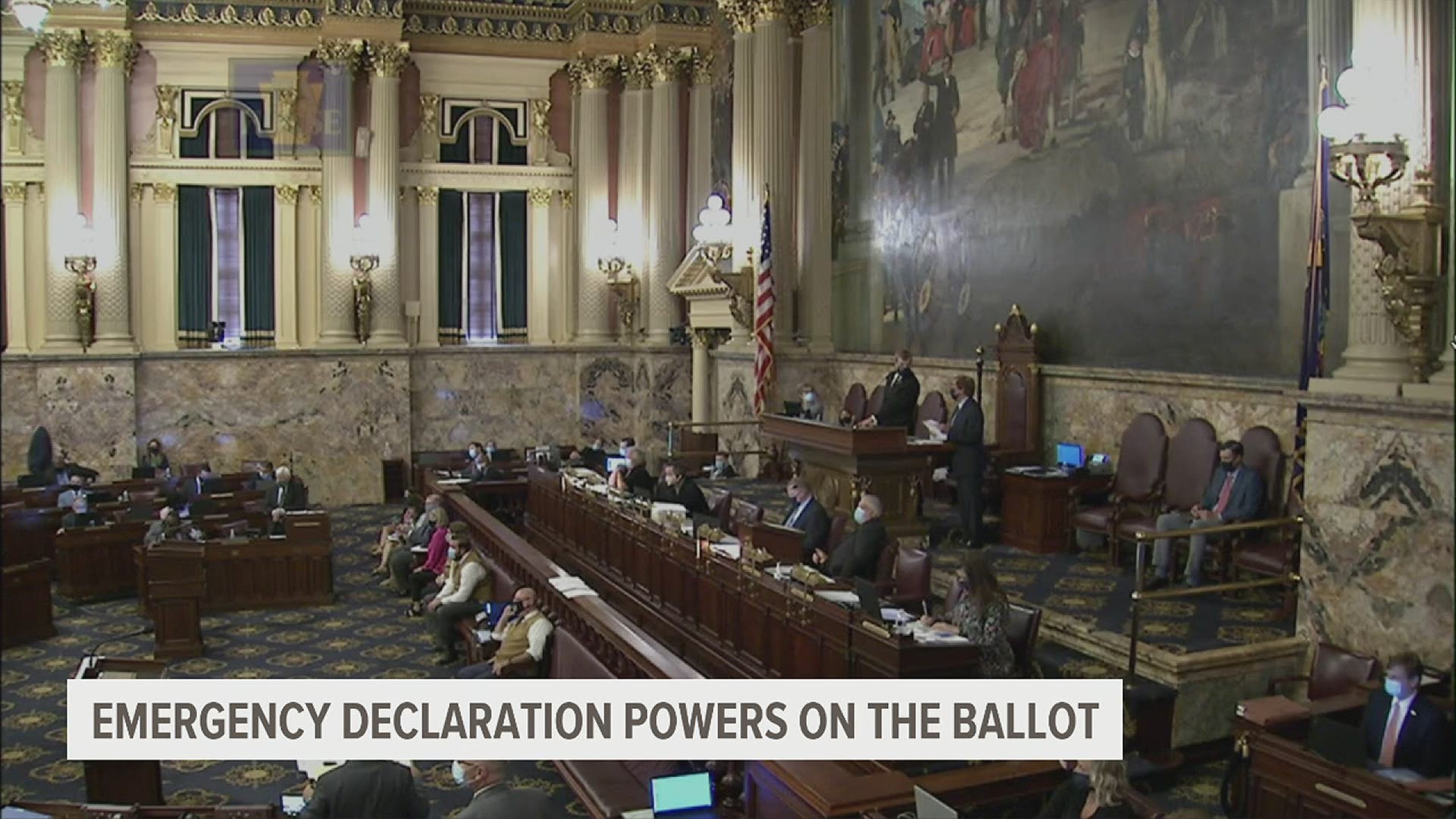 HARRISBURG, Pa. — Two of the four questions on the May 18 primary election ballot address the governor’s emergency declaration powers, a contentious issue amid the pandemic.

Because the ballot questions were spurred by Gov. Tom Wolf’s executive actions during the pandemic, the questions have become a referendum on the governor’s handling of the crisis.

The emergency disaster declaration that made those actions possible and released federal resources to the state was originally announced March 6, 2020. It has since been renewed four times.

In June 2020, state Republicans and a handful of Democrats passed a resolution to terminate the emergency disaster declaration. In July the Pennsylvania Supreme Court ruled the legislature could not unilaterally terminate the governor’s emergency powers by resolution.

The text of the questions reads:

Shall the Pennsylvania Constitution be amended to change existing law and increase the power of the General Assembly to unilaterally terminate or extend a disaster emergency declaration — and the powers of Commonwealth agencies to address the disaster regardless of its severity pursuant to that declaration — through passing a concurrent resolution by simple majority, thereby removing the existing check and balance of presenting a resolution to the Governor for approval or disapproval?

Opinions on the measure fall along party lines.

Democrats oppose them, saying governors need the power to quickly move resources during a disaster.

“It interferes with the checks and balances between the branches of government, between the executive and the legislative branches,” said Pa. Senate Minority Leader Jay Costa (D-Allegheny).

In an email, Gov. Tom Wolf’s office wrote the amendments would not impact the governor’s ability to extend the coronavirus emergency declaration. They wrote,

“Having to repeatedly seek legislative approval during the disaster recovery process could cause interruptions and delays for those Pennsylvanians rebuilding homes, lives, and communities in the wake of future disasters and will greatly hinder local emergency response efforts.”

A knee-jerk reaction to the current Democratic governor’s choices could backfire in the future, according to legal experts.

“Unfortunately a lot things happen and you kind of throw the baby out with the bathwater,” said Scott Cooper, a partner at law firm Schmidt Kramer. “Be careful what you wish for, because at one point Democrats may be in the majority and you may have a Republican governor.”

Republicans said the proposed amendments were not a partisan issue.

The coronavirus emergency declaration is set to expire May 20. It’s currently unclear if Gov. Wolf plans to renew it a fifth time.

Pennsylvania also has declared a state of emergency over opioids for the past three and a half years. That declaration could also be affected by the results of the referendum.

RELATED: Officials consider election security ahead of May primary