Ryan, a Marine veteran, is seeking a third term in office against "Doc" Clements, a retired veterinarian, in this Lebanon County district. 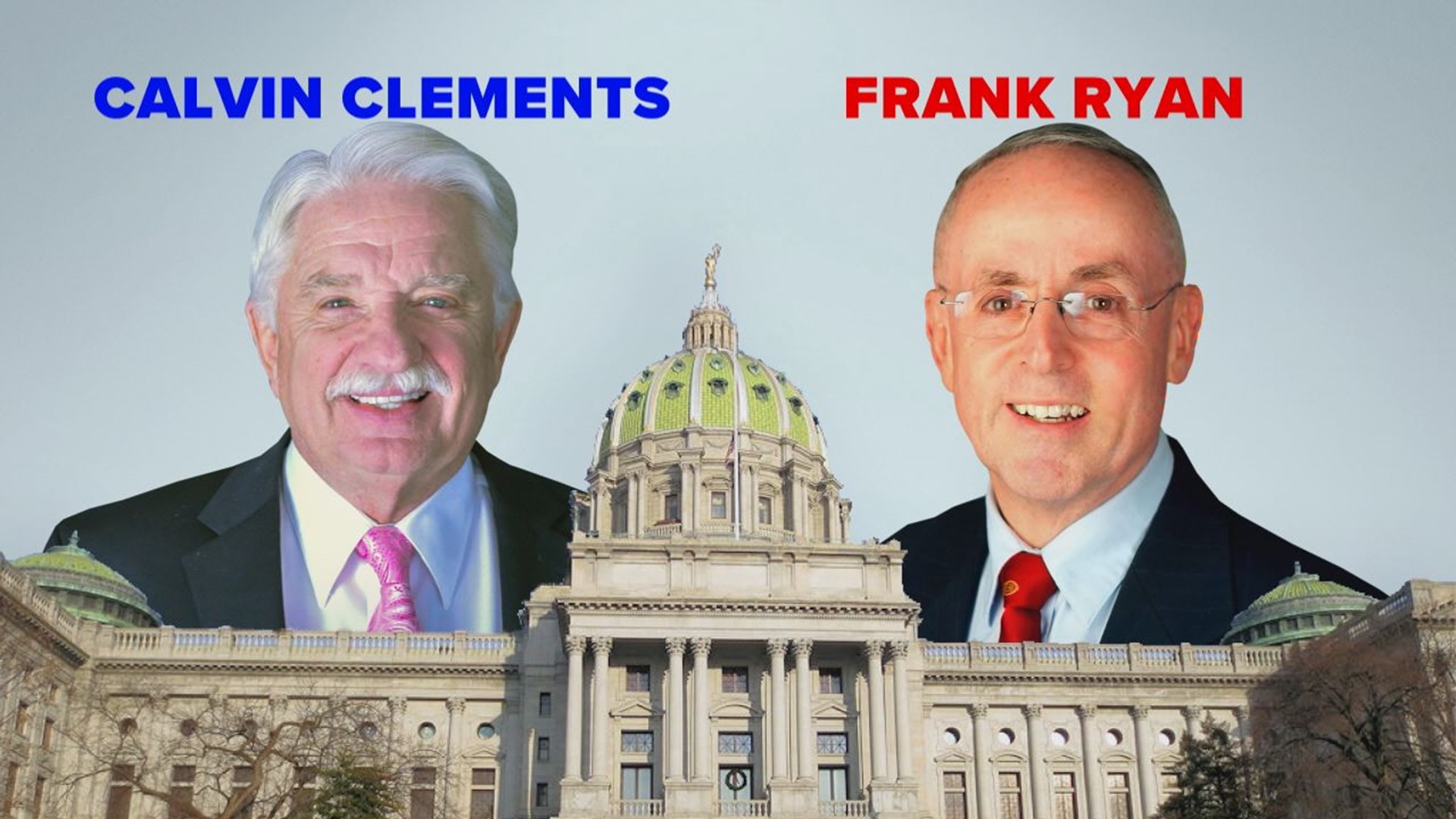 The 101st covers the city of Lebanon, Palmyra Borough, and other surrounding townships and boroughs.

Ryan defeated Cesar Liriano in the 2018 election, earning 65 percent of the vote.

In the current legislative session, Ryan is serving on the Aging & Older Adult Services Committee, the Finance Committee, the Liquor Control Committee, the State Government Committee, and is the subcommittee chair on Military and Veterans Facilities in the Veterans Affairs & Emergency Preparedness Committee.

Prior to his election to public office, Ryan served as the director of policy at the Pennsylvania Department of Labor & Industry.

Calvin "Doc" Clements is from Palmyra, and earned the Democratic nomination after running unopposed in the primary.

Clements retired from his practice in 2019. He worked at the Palmyra Animal Clinic. He is a former chief medical officer at Central PA Veterinary Associates.

He currently works as a rescue veterinarian at 2nd Chance 4 Life Rescue.

Both Ryan and Clements responded to FOX43's candidate questionnaire sent to both candidates. Their responses are below.

REP. FRANK RYAN: My experience as a CPA who specializes in keeping organizations out of bankruptcy is particularly needed now that the Commonwealth is experiencing such critical financial issues at the state, county, municipal and school districts government levels. We must reverse the trend of outmigration of young workers and companies if we are to grow our state. My experience is well suited to the challenge.

CALVIN "DOC" CLEMENTS: Provide representation for all the voters not just a small segment, as with the current representative. I want to return a bipartisan, centrist approach to state government.

REP. RYAN: Financial reforms, budgetary controls and solving complex budget shortfalls is the most critical problem facing our Commonwealth. Without changing our spending, PA is within 12 years of becoming insolvent and we are now within 2-4 years of having to make the difficult decisions necessary to prevent insolvency. If we fail to take these actions within the next 2-4 years, the financial solutions will be so severe that the political will would not be there to solve them, and our insolvency would be guaranteed. I know how to prevent that from occurring.

CLEMENTS: Removing property as the major funding source for education in a fair and sensible fashion. Taxing retirement income is off the table.

CLEMENTS: Change method of funding education through district consolidation, cut the legislature in half, and resolve the unfunded debt issue.

REP. RYAN: Our financial problems such as unfunded pension obligations, severe budget shortfalls, revenue mismatch and lack of financial discipline within the executive branch are profound and will create financial chaos unless solved immediately.

REP. RYAN: Pa must be more transparent with the data, the application of the data, be more inclusive about solutions and END the draconian measures the Secretary of Health has inflicted on the Commonwealth. We must be establishing a trusting relationship with our citizens and REOPEN the Commonwealth while protecting those who are vulnerable.

CLEMENTS: First and foremost, we must follow the science, something that my opponent has struggled to do, especially with the new revelations from Pennsylvania Spotlight regarding his agreement with Wellspan Health that they would "remain silent," according to one of his emails at the time. I will promote a mitigation program for the greater good, enhance testing and tracing, and providing rapid test. We also need to do more to make up for the economic shortfalls.

REP. RYAN: Dr. Birx’s comments were about one part of disaster response not the entire response. Her critique was of the social distance and slowing the spread but did NOT take into account the damage done to the long term health of the PA economy and our citizens. I spend 28 years on a hospital board of directors of the hospital and its affiliates and you must consider the entire impact of disease mitigation efforts and not just one. In my USMC Career, in which I retired as a Colonel, I served as a Commanding Officer of a Civil Affairs organization which was responsible for reestablishing governmental controls in military operations. As such, I believe wholeheartedly that the Executive Branch’s reaction to COVID-19 were inept and will cause and have caused undue deaths (nursing homes) and survivability of the infrastructure necessary to ensure the long term health of our communities and our Commonwealth.

CLEMENTS: The response was better than in many other places, but not without mistakes. Had the Governor prioritized the standards for nursing homes early, many more lives would have been saved. It would have been better with a bipartisan approach rather than the adverserial approach taken.

REP. RYAN: Our state must learn to spend less, reform our government bureaucracy to make PA an easier place to live and work, and substantially revise our tax code. Our taxes in PA are too high and must be reduced through making government smaller and more affordable.

CLEMENTS: Tax the gas industry at the wellhead. Reverse the tax break given to corporations. Consider legalization and taxation of marijuana.

8. Social unrest has played out in front of us as citizens protest the killings of George Floyd, Breonna Taylor, and other Black men and women. What changes are needed to state laws as it relates to criminal justice reform?

REP. RYAN: First such losses of life are so very sad and for that I pray daily for peace. Our police forces are superior and I support our police. The difficulties they face daily with such an unsettled population are more traumatic than military personnel see in combat zones. We must provide support for our police in such trying times to include greater access to PTSD counseling and help. Most importantly, we must provide greater school choice for parents for their children so that the cycle of poverty can be broken where we have failed schools. Creating opportunities for all citizens with access to quality education is key.

CLEMENTS: Increase the educational requirements of police officers, especially in the area of ethnic issues. This education should be highly subsidized, and current officers should have first claim to access education grant money. Reform the bail system to make it more equitable for low income offenders especially for minor infractions. We should decriminalize possession of small amounts of marijuna. Providing counselors to aid in family and mental health calls would also be preferable to the current method. We need a strong police force, but we need to prioritize justice and more stringent rules of violent engagement.

REP. RYAN: In our budgetary reforms, the executive branch has not used funds previously allocated to modernize our systems. Funds have been appropriated and not spend properly in the past. In that regard, the PA legislature must have the ability to ensure that money allocated is spent wisely and appropriately on budgeted items. Our procurement systems are in need a complete overhaul. My HB 985 and HB 1053 are designed to do just that.

CLEMENTS: No response given

CLEMENTS: Yes! I believe the chance of fraud changing the results of the election is extremely small in our state, but that doesn't mean legislators are off the hook. Cases like the ballots discarded in Luzerne County must be prevented by stricter laws regarding contractors and ballots.