Helm, a Republican, has served in the State House covering portions of Dauphin and Lebanon Counties since 2007. Smith lost her election bid to Helm in 2018. 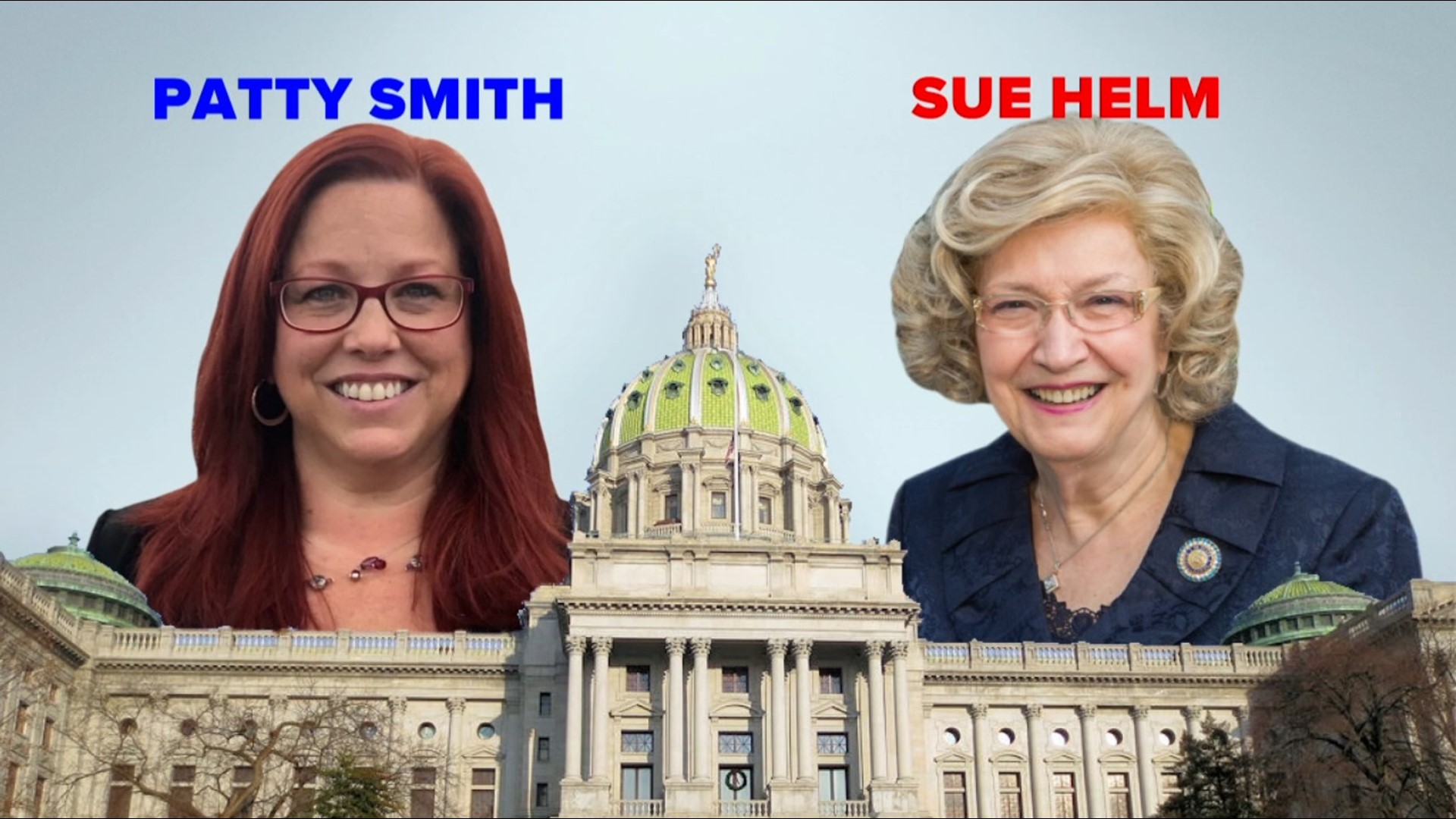 DAUPHIN COUNTY, Pa. — In a rematch of a the 2018 general election race, incumbent Republican Sue Helm and Democrat Patty Smith will decide the seat for the State House for the 104th District.

Helm was elected to the State House in 2006. The 104th District covers numerous townships and boroughs in western Dauphin County and stretches into Lebanon County.

Helm currently serves on the Tourism & Recreational Development Committee and is chair of the Urban Affairs Committee.

When Helm won the District seat in 2007, she became the first woman to serve in the Legislature in Dauphin County history.

As proof of her commitment to her constituents, Helm points to the passage of recent state budgets as a positive indication of how things are changing for the better for taxpayers.

Helm is committed to reforming Harrisburg and leads by example. She has refused a taxpayer-funded car and she also posts her office expenses on her website for all to see.

Patty Smith (D) is a Dauphin County native who has lived in the area all of her life. Her family has owned and operated a business for three generations, starting with her grandfather in 1956. Smith also owns a business of her own.

Smith has advocated and will continue to fight for a transparent government. If elected she'll work to expand whistleblower protection and to make it easier for constituents to report issues they see.

Patty Smith believes the people of Pennsylvania pay too many taxes and will work to reprioritize how the government spends the money it already has.

Smith also says she is a strong supporter of the 2nd Amendment, having grown up in a family of hunters and being a gun owner herself.

FOX43 sent candidate questionnaires to both Representative Helm and Patty Smith. Smith's answers are listed below. Helm did not respond.

PATTY SMITH: I have been a government watchdog with Rock The Capital for a long time and I understand how corrupt PA is. We are the 6th most corrupt state in the country based on the number of elected officials being convicted of a crime. You can still legally buy your very own politician in PA because of the lack of campaign finance reform and no gift ban. When you combine that with gerrymandered districts, you can understand how and why our government officials do not represent the people who elect them but instead, cater to those with influence, money and lobbyists. As a government watchdog, I have seen how the people of Pennsylvania take a back seat, how they have been ignored and how their voice has been silenced. The only way to ensure that Pennsylvania citizens get the representation they deserve is to elect people like me who are committed to ending the corruption in Harrisburg. I will fight for the best interests of the every day person, I will be the voice they have never had, I am committed to transparency and to putting people over party. It is long past time for a change and I know I am the better choice to represent my District in Harrisburg.

SMITH: Reform. I have been a government watchdog with Rock The Capital for a long time and I understand how corrupt PA is. We are the 6th most corrupt state in the country based on the number of elected officials being convicted of a crime. You can still legally buy your very own politician in PA because of the lack of campaign finance reform and no gift ban. When you combine that with gerrymandered districts, you can understand how and why our government officials do not represent the people who elect them but instead, cater to those with influence, money and lobbyists. Without reform at the State House, we will never see laws that help our communities. Without reform, we will never see a higher minimum wage, we will never see our environment, our schools, our workers and equality becoming a priority in Pennsylvania. The only way to ensure that Pennsylvania citizens get the representation they deserve is to elect people who are committed to ending the corruption, people who are committed to transparency and people who are committed to putting people over party. Only then will we see real and meaningful change in Pennsylvania.

SMITH: Getting 100% of all public education money put through the fair funding formula, increasing jobs and protecting our workers and true reform (banning gifts to Legislators, campaign finance reform and limiting the influence of special interests by throwing back the curtain and making it transparent.

SMITH: This is not the answer I would have given 7 months ago, but now, the biggest challenge facing Pennsylvania is COVID-19. How do we keep our citizens safe, how do we increase testing, how do we ensure that our front line workers have the PPE they need, how do we replenish the general fund without putting the burden on our taxpayers, how do we get people back to work and how do we restore the trust of the citizens in their government again.

SMITH: Ensuring that the rest of the CARES money gets distributed to those who need it most, keeping our citizens safe, increasing testing, ensuring that our front line workers have the PPE they need, replenishing the general fund without putting the burden on our taxpayers, getting people back to work and restoring the trust of the citizens in their government again.

SMITH: I think Pennsylvania did a good job and I believe that the statistics prove that. I believe that masks should have been mandatory sooner and that the Democrats and Republicans would have worked together to solve this crisis instead of politicizing it and using it as a weapon against the other side. Partisan politics have no place in our government and especially not during a pandemic when the pubic is counting on them to put our best interests ahead of their own and ahead of their party. It is a disgrace that they could not set aside their political differences to do what was best for the citizens of Pennsylvania.

SMITH: Pennsylvania needs to stop “bailing out” special interests and industries who are not in need of it, we need to move past our dependence on fossil fuels and invest in renewable energy and the jobs those industries would bring, we need to close the Delaware Loophole, enact a Fair Share Tax system, raise the minimum wage so that people have money to spend and invest in our education which is the foundation of every aspect of our economy, to name a few.

8. Social unrest has played out in front of us as citizens protest the killings of George Floyd, Breanna Taylor, and other Black men and women. What changes are needed to state laws as it relates to criminal justice reform?

SMITH: We need to invest in our communities to prevent crime from starting in the first place, we need to fix our bail and probation systems, we need police who understand the communities they serve, we need to establish citizen oversight boards, we need our prisons to be a place of reform, we need to abolish the death penalty and our criminal drug policies need reformed. Our criminal justice system is completely broken, it needs a complete reform.

SMITH: We need to fully staff our uc system again. We need to restore the cuts that were made, upgrade our equipment and software, have a better system in place to field calls and have a plan of action for when it is flooded with claims like it was this year. The state should have met the crisis head on and immediately hired enough people to handle the claims in a timely manner. It should have been of the highest priority to get unemployment money in the hands of those who needed it, instead our state tried to handle it with the diminished staff (that they created). Diminishing a department to the bare bones and then expecting them to be able to handle a crisis of this magnitude was the worst possible decision.

SMITH: I believe that the security of Pennsylvania’s election can be trusted. With that being said, I do believe that we need to ensure that there is no voter intimidation at the polling locations, no misinformation allowed to go uncorrected and that we ensure that all mail in ballots are counted. I do not believe, however, that House Resolution 1032 should pass. The people who have a stake in the outcome of an election should never be placed in a position where they can meddle with that election and that goes for both parties.